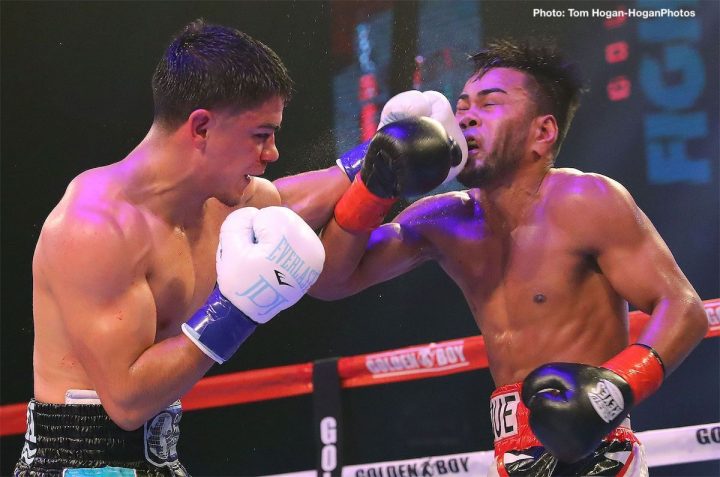 By Eric Coronado Jr.: In what was turning out to be a major win for boxing with over 50,000 viewers at one point, Golden Boy dropped the ball for Saturday’s Jesus Rojas vs. Jojo Diaz card at The Avalon in Hollywood, California. Diaz won the fight by a 12 round unanimous decision.

After three exciting undercard fights, the Facebook stream of Jesus Rojas vs. Jojo Diaz went dark halfway through the main event. To add insult to injury, whoever manages Golden Boy’s comment section continued to ask who would win the next round and claimed that the stream was back up. Ironically, I was only able to continue viewing after a random Facebooker posted a working YouTube link. Bad form, Oscar De La Hoya.

Based on the viewer count on the YouTube feed, it appears as though close to 40,000 viewers lost their Facebook stream. Several viewers also complained about poor video quality throughout; a problem that I experienced as well. One other shared complaint was that all commentators made it clear throughout the night that Golden Boy has its favorites, and they’re not afraid of making it known. Mario Lopez in particular really presented initial bias that persisted throughout every fight.

Golden Boy’s new ring announcer, Jeremiah Gallegos, made a powerful debut. Though small in stature, he has poise, presentation, and vocal ability to contend with the great Michael Buffer.

Surprisingly for many viewers, Rocsi Diaz (106 & Park) provided fighter interviews, and did an okay job. It’s clear that she was out of her element but has the natural ability and charisma to pull it off with more experience.

All in all, Golden Boy’s partnership with Facebook seems promising, but they may have left many potential viewers with a bad taste in their mouth by ruining the main event of what was almost a phenomenal success. One can only imagine what a nightmare this could have been with bigger names on the card. That aside, many boxing fans can appreciate the forward looking effort by GBP to increase access to and promote the sweet science. Hopefully, with more practice, this can be a recurring and reliable experience.