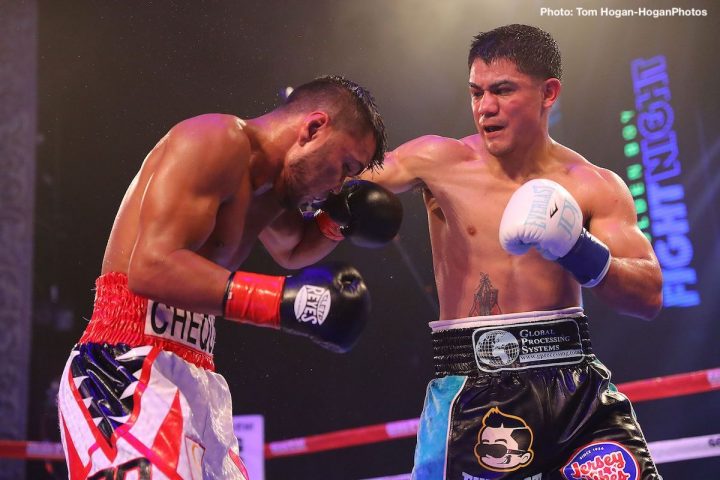 The inaugural edition of Golden Boy Fight Night on Facebook Watch kicked off with a bang as Joseph “JoJo” Diaz Jr. (27-1, 14 KOs) of South El Monte, Calif. defeated Puerto Rican warrior and WBA Featherweight World Champion Jesus Rojas (16-1-2, 19 KOs) via 12-round unanimous decision in an exciting main event from a sold-out Avalon Hollywood. Though he struggled to hurt Rojas, Diaz Jr. was more active in every round, which earned him the decision win with scores of 116-112, 115-113, and 117-111. Rojas remains champion despite the loss per WBA rules.

“We won, but unfortunately I don’t get to come home a world champion because of weight issues,” said Joseph Diaz Jr. “I switched my diet this camp because I feel like my body has been changing, and I did something I never usually do to try to make weight. That is what made my body respond in a scary way with arm tingling and just feeling super fatigued. If the opportunity comes, I still want a fight at 126 pounds with any of the big guys, but if that doesn’t happen I wouldn’t be opposed to moving up to 130. Rojas came to fight. I don’t think people expected for this to be a tough fight, but it was. I would be willing to get a rematch with him.”

“It was a great fight. Diaz came to fight. We gave a fight that the people deserved,” said Jesus Rojas. “I feel I was more active and that I threw punches. He was tired, and I was able to connect more with punches. The judges are the ones who make the call. One can see it one way, while another sees it another way. The judges make the call. I proved myself again the best. He wasn’t the great Joseph Diaz that you saw against other fighters when he was in the ring with me. I still feel I’m one of the top 126-pounders in the world.”

In tonight’s co-main event, Golden Boy Promotions presented yet another battle between two of its undefeated prospects as Jonathan “Thunder” Navarro (14-0, 7 KOs) of East Los Angeles, Calif. defeated Damon “No Smilin'” Allen Jr. (15-1-1, 5 KOs) via stunning seventh-round technical knockout. Navarro was the stronger and more accurate of the two fighters, landing short right hands before forcing the fight to be stopped at 1:33 of the aforementioned round.

“I feel great. Stepping up in class really made the difference,” said Jonathan Navarro. “He [Allen] took everything out of me. He’s a prospect, and he’s hungry, and he brought a lot out of me. I knew that once he felt my power, he would be out. I’m ready for whatever is next. I have to talk to my dad, my manager and Golden Boy Promotions, but I’m ready for anything.”

“It just wasn’t my night. He [Navarro] had the better class and plan, and we just came up short,” said Damon Allen Jr. “We’re both top prospects, and we knew it was going to be a war in there. I failed to keep my hands up and let him take control of me. I have to go back to the drawing board and see what’s next. I’ll be back – we just have to re-evaluate some things.”

“I came to give a great performance to the fans and to my family,” said Ferdinand Keroyban. “I feel so blessed to be a part of the first Facebook Watch show, and I hope my performance tonight shows that I’m capable of taking advantage of these opportunities. I wanted to get the knockout, but I am pleased with the result we got tonight. He was tough, and we were able to get some good exchanges. I look forward to jumping back into the ring soon.”

“Being a part of the Golden Boy Fight Night on Facebook Watch was amazing. I’m glad that I get to be a part of boxing history, and that my family from back home can watch,” said Aaron McKenna. “I thought that we did great – I went in there with an opponent with more experience than me who was ready to go in. I learned a lot from those four full rounds. I’m looking forward to going back into the ring with an opponent Golden Boy and my team think would be a good fit for me.”

Jose Vargas (5-0, 4 KOs) scored a third-round technical knockout victory against Leonard Reyes (7-18, 3 KOs) of Tijuana, Mexico in a scheduled four-round featherweight battle. The fight was halted at :36 of the aforementioned round.

“I’m barely starting out, so everything I do still needs work,” said Jose Vargas.”I’m glad we got the knock out, and now it’s back to the drawing board to prepare for the next one.”

Rojas vs. Diaz Jr. was a 12-round fight presented by Golden Boy Promotions in association with Universal Promotions. The event was sponsored by Tecate,”THE OFFICIAL BEER OF BOXING,” and Hennessy, “Never Stop, Never Settle.” The fights took place on Saturday, August 11, 2018 at Avalon Hollywood. The action was be streamed live on Facebook Watch in the U.S. and globally on the Golden Boy Fight Night Facebook Page. Fans can catch all the fights by following the Golden Boy Fight Night Page.