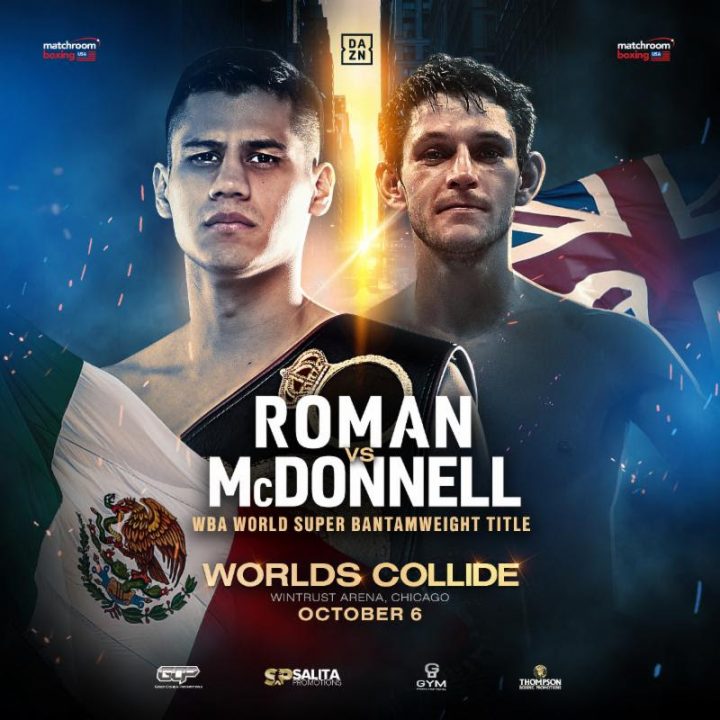 Danny Roman (25-2-1, 9 KOs), the current WBA super bantamweight champion, will defend his crown against the No. 4 ranked challenger in Gavin McDonnell (20-1-2, 5 KOs) on Saturday, Oct. 6 from the Wintrust Arena in Chicago.

The 12-round world title clash was formally announced today at a Chicago press conference. The championship fight will be available for viewing via DAZN, a live and on-demand streaming service that will make its U.S. debut in September.

Roman, 28, will defend his championship for the third time since winning the title in a ninth round knockout over Shun Kubo last September.

“This is another great opportunity to show everyone that I am the best in this division,” said Roman, who entered into a co-promotional deal with long time promoter Thompson Boxing and new partner Matchroom Boxing in July. “I’m excited to get in the ring with a quality boxer such as McDonnell. I think our styles are going to make for a tremendous fight.”

“Danny is making good on his promise to only fight the best,” said Ken Thompson, president of Thompson Boxing. “He aspires to be considered the top boxer in what is a talented division. He’s already looked incredible in his first two title defenses and we expect another dominating win against the always tough McDonnell on October 6.”

The Los Angeles-based Roman already has two successful title defenses on the year, while England’s McDonnell has won four in a row since losing to current WBC belt holder Rey Vargas in a vacant world title fight back in early 2017.

“This is a tremendous world title fight for our first show on DAZN in the U.S.,” said promoter Eddie Hearn of Matchroom Boxing. “Danny won his title in brilliant style on the road in Japan against Shun Kubo and was fantastic in both his first defense back in Japan against Ryo Matsumoto and his second against Moises Flores in Texas. I want the world to see just how talented this guy is, and we have a great fight for him to do so.”