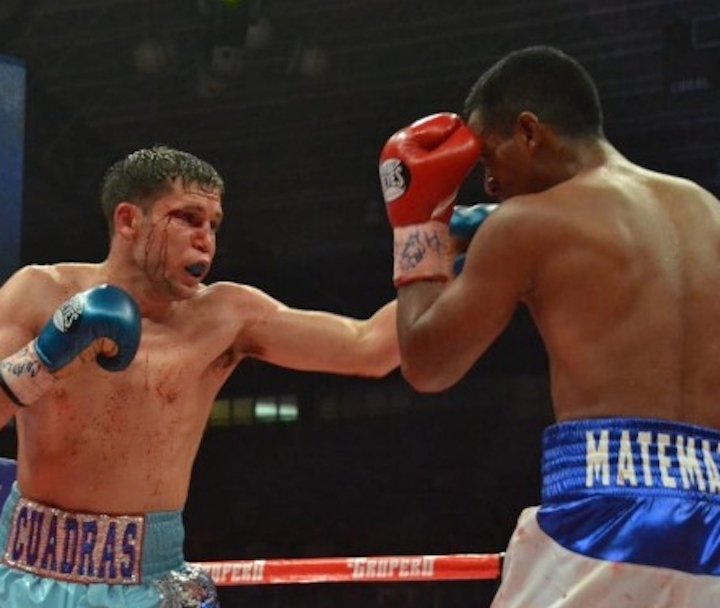 The fight showed that Cuadras continues to have the same stamina problems that have plagued him in the last two years. Cuadras was worn out by the 4th round last Saturday. The only reason he won the fight is because Nunez was fighting in such a reckless manner in suffering two point deductions for head-buts and leaving himself open for shots from Cuadras. Never the less, many of the rounds were close enough to go either way.

The fight was halted after the 7th round due to the 29-year-old Cuadras suffering his second cut of the evening from a clash of heads with Nunez. Cuadras was cut over his right eye in the 7th round from a head-butt. Earlier in the fight, Cuadras suffered a cut over his left eye from a head-butt. This resulted in Nunez being deducted a point. Nunez was also penalized in the 6th. Nunez and Cuadras were clashing heads the entire. It didn’t look intentional. It appeared more of a product of their fighting styles. Nunez’s occasional rabbit punches looked more flagrant than his head-butts.

It was a good thing that the fight was stopped after the 7th round, as Cuadras looked exhausted and he was getting pressured hard by the taller 5’7” Nunez. Cuadras was completely gassed out from the pressure that Nunez was putting on him. Of the two, Nunez had the better engine by a long shot. As tired as Cuadras was, there’s some doubts whether he would have made it the next five rounds to see the end of the fight in the 12th. Cuadras looked completely tired out. Cuadras was hurt many times in the fight by Nunez, but he was able to stay on his feet to finish the rounds.

The problems that Cuadras had in beating Nunez leaves a lot of questions about his sinking career. This should have been an easy fight for Cuadras if he had anything left of his skills. Nunez is not a great fighter by any means, and yet Cuadras made him look good due to his poor stamina and defensive skills. The 30-year-old Nunez came into the fight having lost to Drian Francisco [5th round knockout], Moruti Mthalane [TKO 8], Juan Carlos Reveco [technical decision eight], Jonathan Arias [2nd round knockout], Leduan Barthelemy [8 round split decision] Leosdan Nunez [3rd round disqualification].

Cuadras did not put in the best performance in coming off of a loss to McWilliams Arroyo last February. Cuadras had been out of the ring for the last six months dealing with his addiction problems.