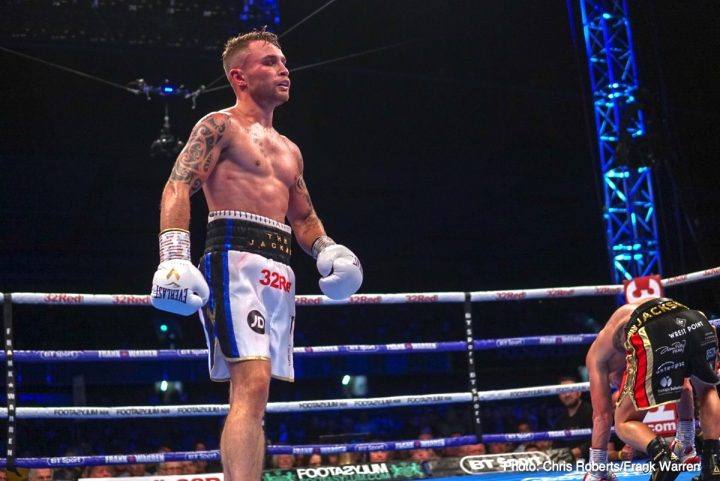 NEWS:   Dave Allen vs. Christopher Lovejoy on Oct.31 on Usyk-Chisora card on DAZN

An encore presentation will air in primetime tonight at 10 p.m. ET/PT on SHOWTIME EXTREME®.

Frampton (26-1, 15 KOs) turned in an impressive performance and scored his first knockout as a featherweight in what was a “dream” homecoming fight at the home of Northern Irish football. The former 126 and 122-pound champion now has his sights set at becoming a champion yet again in one of boxing’s deepest divisions.

After a dominant seven rounds, Frampton scored a knockdown via a body shot with 30 seconds left in the eighth. Jackson (16-1, 7 KOs) survived the eighth but was clearly hurt. With Jackson absorbing continued punishment in the ninth, and down big on the scorecards, Jackson’s corner threw in the towel at 1:21.

“This was unreal,” Frampton said. “The atmosphere was special, the crowd was fantastic and they made my dream come true. It was unbelievable from start to finish.”

Fury (27-0, 19 KOs) established his jab against Pianeta (35-5-1, 21 KOs) and displayed the movement, hand speed and footwork that a prime “Gypsy King” utilized to dethrone Wladimir Klitschko in 2015 to become the unified and lineal heavyweight champion.

“I think it was a calculated boxing performance, as promised,” said Fury, who was fighting for just the second time in nearly three years. “We were able to get 10 good rounds in with a tough man. I was working on my boxing, trying to slip and slide, use the jab and get the rounds in. I was very happy with the performance.

“It’s no secret I need the rounds. I need to prove that I can go 10 rounds and have plenty left in the tank, and I did that tonight.”

After the fight, Wilder entered the ring to announce that the two undefeated heavyweights have agreed to a 2018 showdown for Wilder’s WBC title. A date and venue for the event, which will be produced and distributed by SHOWTIME PPV, will be announced shortly.

“We’re ready now,” Wilder said during the post-fight interview. “This fight will happen. It’s on. This fight is official. This is what we’ve been waiting for, the best fighting the best.

“There’s one thing Tyson Fury has never had. He’s won a lot of belts but he’s never had the WBC belt. If he ever even thinks about having this belt he better wake up and apologize to me because it will never happen. I can’t wait to fight you because I am going to knock you out. This I promise you. Every man who has ever stepped in the ring with me, I’ve knocked them out in devastating fashion. You’ve never been knocked out, but you’re going to feel the experience of what it’s like to be hit by the Bronze Bomber.”

The 6-foot-9 Fury, who never lost his titles in the ring, will now face the 6-foot-7 Wilder, who has 39 knockouts in his 40 professional fights.

“We are two men who will fight anybody,” Fury said. “This man has been trying to make a big fight with the other chump, I think we all know who I’m talking about. They called, I answered. I said to send the contract, they sent me the contract. I said yes. And now he gets his chance to fight the linear heavyweight champion of the world.

“My promise is that when we go to Las Vegas, I’m knocking you out.”