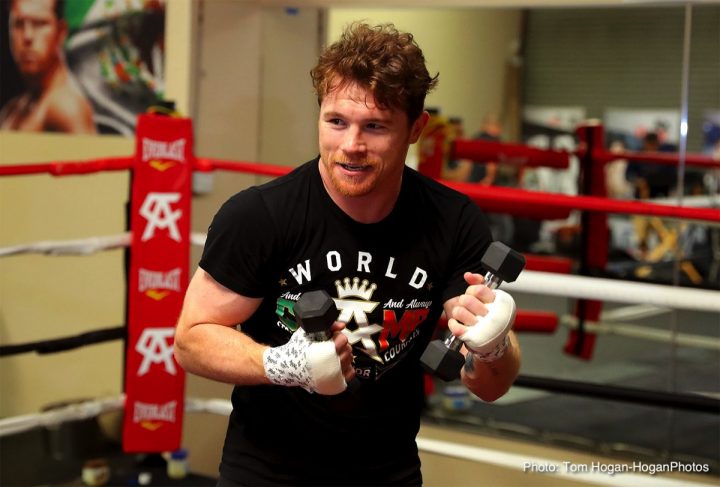 By Dan Ambrose: Saul Canelo Alvarez says he must adapt to improve his game for his rematch with Gennady ‘GGG’ Golovkin next month in their rematch on September 15. Even though the 27-year-old Canelo believes he should have been given the victory for their fight last years in September, he understands that he needs to make changes to his game for him to defeat Golovkin (38-0-1, 34 KOs) to take his IBO, WBA and WBC middleweight titles on September 15 on HBO pay-per-view at the T-Mobile Arena in Las Vegas, Nevada.

Canelo’s first fight with GGG was scored a 12 round draw. Canelo wants to leave no doubts in the minds of the judges and fans in the rematch, and the best way to do that is to come with a better plan than he and his trainers Chepo and Eddy Reynoso had for the first fight. Their plan for the previous fight was to keep from being worked over by the bigger and stronger Golovkin. The way that Canelo accomplished that goal was to present a moving target, which worked, but it didn’t work well enough to win rounds in a convincing manner. Canelo looked like he was running from Golovkin from rounds 3 to 12, and that made it hard to see him as the winner of the fight.

”Whatever it takes, I have to do something different in this fight to win convincingly,” Canelo said via fighthub. ”I was in good shape but I needed a little more to throw more punches.”

Canelo’s limited stamina will keep him from being able to use a different game plan for the Golovkin rematch on September 15. Canelo has been talking about wanting to take the fight to Golovkin, but that might be a trick to throw him and his trainer Abel Sanchez off by making them think that he’s going to have a dogfight in the rematch. It’s more likely that Canelo will use the exact same spoiling tactics for the rematch that he used in the first fight, which means the boxing fans are going to see a lot of movement from the Golden Boy star if Golovkin lets him.

There’s a good chance that Canelo’s new game plan for the rematch with Golovkin is for him to use these tactics: Holding, moving, roughhouse tactics, jabbing, body shots and fighting hard in the first minute of the rounds to impress the judges.

Golovkin needs to go back to his old style of fighting by looking to knock Canelo out for him to win the fight. Unfortunately for Golovkin, his management negotiated the rematch with Canelo for Las Vegas, and that means the Kazakhstan fighter is likely going to be in a position of weakness when it comes to the scoring of the fight. If the rounds are close, Canelo will have a very good chance of winning them. Golovkin can do himself a world of good if he knocks out Canelo so that the judges don’t have a chance of scoring the fight.

There aren’t too many things that Canelo can do differently in the rematch to beat Golovkin that he didn’t try in the first fight. Moving obviously isn’t going to work, as it just looks Canelo is running from Golovkin when he uses movement, and the judges will be put in a bad position where they’ll be sticking their necks on the line if they give the red-haired star rounds where he’s running. Staying on the ropes didn’t work for Canelo last time because he was getting jabbed and outworked by the longer-armed, better conditioned Golovkin. If Canelo stays on the ropes for any amount of time in the second fight, he’s going to get worked over by Golovkin. Canelo’s smaller size for the rematch is going to put him in the same position that guys like Kell Brook, David Lemieux and Curtis Stevens were in when they fought Golovkin. Those fighters lacked the size to compete against Golovkin. When they were on the outside,

they were eating shots from GGG and unable to do anything against him. The only fighter of the three that had any success against Triple G was Brook, who took the fight to him at times and landed some shots. You can argue that Brook did a better job against Golovkin than Canelo did, considering that he was able to win rounds by coming forward and attacking him. Canelo won most of his rounds in the fight in the first two rounds before Golovkin had started to throw punches. After Golovkin started to press the fight in round three, he dominated the rest of the way.

”The first fight showed me what I need to do in order to win this rematch convincingly, even though I keep thinking I won the first fight,” Canelo said.

Canelo and his team are likely assuming that the brief amount of success head had in the opening minute of rounds 10, 11 and 12 are the key to him beating Golovkin in the rematch. In other words, Canelo thinks that if he attacks Golovkin more in the rematch, he’ll be able to beat him by a decision. The thing that may hold Canelo back from accomplishing that plan is his lack of stamina. Canelo has always gotten tired when he throws combinations. Canelo needs to take rest breaks to recover. So if he fights hard at the start of each round in the Golovkin rematch, then he’s very likely going to be resting for the last two minutes trying to keep the Kazakhstan fighter off of him by moving. That strategy worked for Canelo last time, so it might be the best thing for him to use in the rematch.

Last time, Canelo would land some eye-catching shots in the first minute of each round, and then he would invariably get tired and spend the rest of the round moving to avoid getting hit. The judges gave Canelo the rounds based on his activity in the first minute. Using that same game plan against Golovkin will be tougher the second time around given that GGG will be on the attack from the start of each round. His trainer Abel Sanchez will make sure that Golovkin knows that Canelo will be attempting to win the rounds by fighting hard in the first 50 seconds of each round. Golovkin will stay on top of Canelo at the start of each round and not giving that portion of each round by default like he was doing last time. GGG can’t count on the judges scoring the entire round, as they might choose to fill out their scorecards on what they see in the first minute and ignore the last two-thirds of the rounds. Good judges watch the entire round and score the rounds based on the entirety, but unfortunately it appeared that the three that worked the first Canelo-GGG fight were scoring the rounds from what they saw in the first 45 seconds.

If Canelo had been able to throw more than two to three punches without tiring, then he might have had a chance of scoring a knockout of Golovkin last time. With Canelo mainly throwing single punches, he wasn’t going to knockout GGG or any top level fighter from the middleweight division. Canelo can knockout welterweights with his pot shots like he did against Amir Khan, but he’s never going to be able to score knockouts against middleweights fighting like that. Canelo doesn’t hit hard enough at the middleweight level for him to KO guys with his single pot shots. The only way Canelo will be able to knockout guys at 160 fighting like that is if he faces guys with chin problems. Canelo has no chance at stopping Golovkin unless he can somehow hurt him with a body shot, which is doubtful. It would be risky for Canelo to target Golovkin’s body because he’ll leave his chin unprotected and wind up getting clipped by something.

What we don’t know is how strong Canelo will be in the rematch. Canelo was blown up physically for the first fight after having bulked up with a lot of muscle mass that he packed on in a hurry after the fight was announced. If Canelo lacks that muscle mass for the rematch, then he might not feel “really good” like he said about his first fight. Canelo looked like he was weighing in the 190s for the first fight. For the rematch, Canelo might be as low as 170. Without the muscle mass that Canelo was packing for the first fight, he could be in trouble against GGG, because he won’t have the cruiserweight level mass that he had last time. The rematch will be more of a middleweight level fight between two guys of similar weight rather than a middleweight facing a cruiserweight sized Canelo. If Canelo is considerably lighter for the rematch, then he’ll have better stamina but it will come at a cost of having less punching power behind his shots. If Canelo lacks the power and bulk to keep Golovkin off of him, then this fight could end early within six rounds. As small as Canelo is looking in his training pictures, he could be in trouble when he gets inside the ring with Golovkin. Canelo is looking like another Miguel Cotto type small guy, and he’s not going to have the size to keep GGG off of him being that tiny.