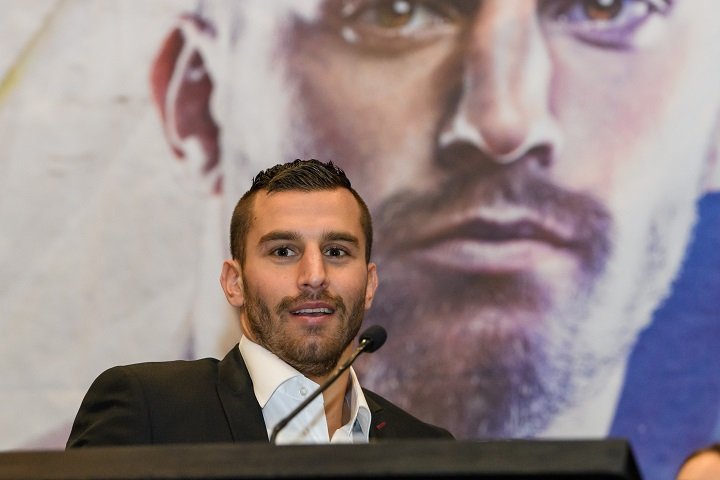 By Dan Ambrose: If he gets past Gennady ‘GGG’ Golovkin in his rematch next month, Saul Canelo Alavarez may wind up facing the winner of the September 15 fight between David Lemieux and Gary ‘Spike’ O’Sullivan, says promoter Oscar De La Hoya. Those two are basically fighting for the chance to fight Canelo, but the winner of that fight will need to look sensational.

De la Hoya doesn’t want to put Lemieux (39-4, 33 KOs) or O’Sullivan (28-2, 20 Kos) inside the ring with Canelo if they fail to impress. Lemieux vs. O’Sullivan will be televised on HBO pay-per-view, along with the Canelo-Golovkin 2, Jaime Munguia vs. Brandon Cook and Roman ‘Chocolatito’ Gonzalez vs. Moises Fuentes.

Canelo, 28, is going to need a good opponent to face after the smoke clears from his rematch with Triple G on the 15th of September. It’s important that Canelo take a breather after the second fight with Golovkin by taking a step down in competition. Fighting the winner of the O’Sullivan vs. Lemieux fight will give Canelo (49-1-2, 34 KOs) the breather that he needs. Canelo is likely going to take a lot of punishment in the rematch with GGG. This is not going to be the wipeout that De La Hoya is counting on it being. It’s going to be a more painful fight for Canelo than the first one by far, as Golovkin realizes that he’s not likely going to be given the decision if the fight goes the distance. After being bunred the last time with the judges scoring his fight with Canelo a 12 round draw last September, Golovkin doesn’t want to take a chance of receiving similar treatment.

“Well nothing’s a guarantee. But obviously it depends on them,” De La Hoya said to Fighthub. ”It depends on how great the fight is. If O’Sullivan looks great, or vice versa, and they can make an argument, then you have to take a look at that.”

No matter how great Lemieux or O’Sullivan look on September 15, the hardcore boxing fans are going to prefer seeing Canelo face someone else rather than one of them. The problem is O’Sullivan isn’t well known in the U.S, and he still won’t be known after his fight with Lemieux. In the case of Lemieux, he’s been beaten badly in the past in well publicized defeats against Golovkin, Billy Joe Saunders, Joachim Alcine and Marco Antonio Rubio. For fans to want to see Canelo fight Lemieux, he would need to beat a lot better fighter than O’Sullivan. Lemieux would need to beat the likes of Saunders, Daniel Jacobs, Jermall Charlo, Demetrius Andrade or Sergiy Derevyanchenko. I’m not sure that Lemieux can beat even one of those fighters, let alone all of them. If Golden Boy Promotions matches Canelo against the winner of the O’Sullivan vs. Lemieux fight, it’s going to make him look like a cherry picker, because there are beter fighters than either of them.

”So we’ll see but Canelo has ambitious plans. He wants to unify, he wants to fight the best — so it all depends on fighter’s performances,” De La Hoya.

Lemieux and O’Sullivan possess the kind of punching power to make for an exciting ending of their fight, but neither of them would be a viable opponent for Canelo or Golovkin to face after their rematch in September. Those two need to be fighting the likes of Charlo, Saunders, Andrade or the Jacobs-Derevyanchenko winner.