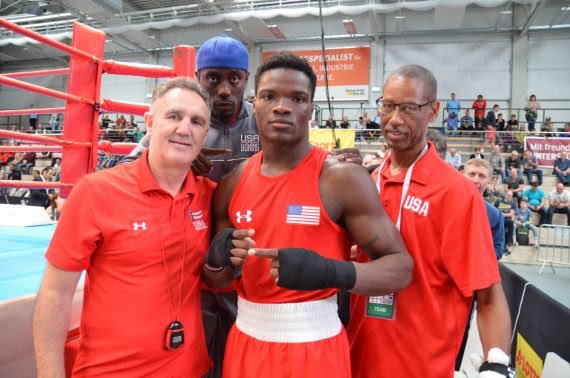 Nearly 100 boxers represented 16 different countries at the Chemistry Cup, including, Russia, Ukraine, Ireland, India and host Germany, in addition to the United States and Cuba.

The 21-year-old Coe, who was boxing in only his 25th match, his first on the International scene, stole the show and he was named Most Outstanding Boxer of the tournament. In the semifinals, Coe knocked out Matus Strnisko, of Slovakia, in the first round.

Khalil Coe is a candidate for the USOC Best Male Athlete of the Month for June. Voting ends this evening at https://awards.teamusa.org/

Coe respected but he wasn’t intimidated by his much more experienced opponent, 2016 Olympic gold medalist and four-time world champion La Cruz, who had one less fight in the World Boxing Series than Cue did during his entire amateur career.

“My first fight in the tournament was the hardest I’d had,” Coe explained. “I studied him (La Cruz) a lot and watched him fight in the semifinals (defeating three-time European champion Joseph Ward (Ireland), which was right after my semifinals fight. He (La Cruz) is very elusive and flashy, but he doesn’t like to get hit in the body. He moves his body, but he forgets about his head. I pulled him, on him, moving around with my footwork and shuffling. He threw a lazy jab and I hit him right on the chin with a right.”

Coe’s short, compact right-hand punch landed right on the button, dropping La Cruz a little less than two-minutes into round one. The Cuban beat the count, but the referee ruled that he was unable to continue. La Cruz was still “The Man” in the light heavyweight division and by knocking him out, Coe proved that he truly belongs with the elite, and that the No. 1-rated American is the fighter to beat in terms of qualifying for the 2020 U.S. Olympic Team.

“I let everybody know that I’m here,” Coe added. “I still need to work on a lot of different things. I need to throw more combinations, keep by stamina up, and improve everything to be better. I’m more of a pure boxer, but I have strength and punching power. Coach (Billy) Walsh doesn’t change his fighters, he adds to what they have. The coaches put together a fight plan and I executed it.”

“Khalil’s performances in Germany were world class,” Team USA head coach Walsh said, “To be truly world class, we now have to repeat those performances regularly, and that’s where the challenge lies.”

On this year’s USA vs. Ireland Northeast Tour, Coe was 2-0 against his Irish counterparts in Boston and Springfield

Coe often got into fights in school, until his mother sent him to a local gym, and his first amateur bout was when he was 12. If he wasn’t boxing right now, the 6′ 1″ Coe believes he would probably be playing college football, as a fullback or defensive end.

Close with his USA teammates, particularly Keyshawn Davis, Coe lives and trains with them in Colorado Springs. “We’re more than a team,” the Jersey City, New Jersey boxer concluded, “we’re like a family – guys, gals and coaches — in Colorado Springs.

“I’m going to turn pro after the Olympics, one way or the other, God-willing, after I win a gold medal.”