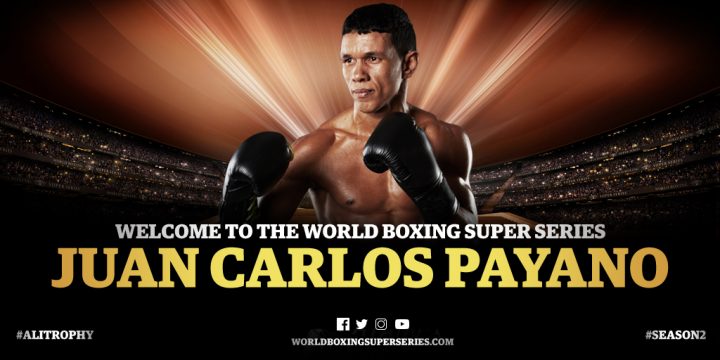 “I am very happy to join the tournament, ecstatic to be very honest. Looking forward to regaining my championship positions,” said Payano.

“It is great to see the best fighting the best and in the end being recognized as truly the best in the division.”

34-year-old Payano (20-1, 9 KOs) of La Vega, Dominican Republic is a former WBA and IBO bantamweight world champion and believes he will be a dominant figure in the World Boxing Super Series.

The southpaw nicknamed ‘Baby Pacquiao’ is on a mission: “I want to be recognized as the undisputed best. I want to prove that I am the best!”

“The bantamweight tournament will be nothing but exceptional,” said Comosa’s Chief Boxing Officer, Kalle Sauerland. “Payano is a former champion, an experienced fighter guaranteeing fast-paced action. He is another great addition to a star-studded Season II of the World Boxing Super Series.”

Undefeated Idigov (13-0, 5 KOs) hails from Grozny, Russia, but is currently training in Detroit with Javan SugarHill Steward at Kronk Gym. The 22-year-old slugger made his debut under the Salita Promotional banner last June, with an impressive unanimous 10-round decision over then once-beaten James Ballard at the Masonic Temple in Detroit.

“Training in Detroit at the Kronk Gym has helped me in many ways,” said Idigov. “I learned how to train like a pro and am learning different techniques and boxing tactics. It has taken my game to new levels.”

Promoter Salita, who is amassing a large stable of promising Eastern Bloc fighters, male and female, says his Russian prospect is developing quickly working out at Kronk.

“Aslambek is a strong, hungry, aggressive fighter. Seeing him improve every day over the last several months, training in Detroit, and his impressive win over James Ballard showed me that he has real world-class potential. At only 22 years old with already several quality wins under his belt, Aslambek is on his way to becoming a force in the super middleweight division.”

With New Management Team, Andrey Fedosov looks to get back into Heavyweight Title contention

On June 30th, in Phoenix, Arizona, heavyweight Andrey Fedosov (30-3, 25 KOs) returned to the ring with a 1st round stoppage over Francisco Mireles.

The 32 year-old Fedosov was making his 1st start under his new management team, Journeyman Management.

With his new managers, Journeyman Management headed by longtime boxing man, Andrew Zak, along with promoters Banner Promotions and Hitz Boxing, Fedosov will look to position himself in the suddenly hot heavyweight division.

“It took some time, but now he is with his new family,” said Andrew Zak of Journeyman Management.

“Not only does he have a new management team, but now a new trainer in Buddy McGirt. We see him becoming a complete fighter. He is learning a lot from Buddy. And now that he is with our team, he is adding a lot to his game, and we see him being a world champion.”