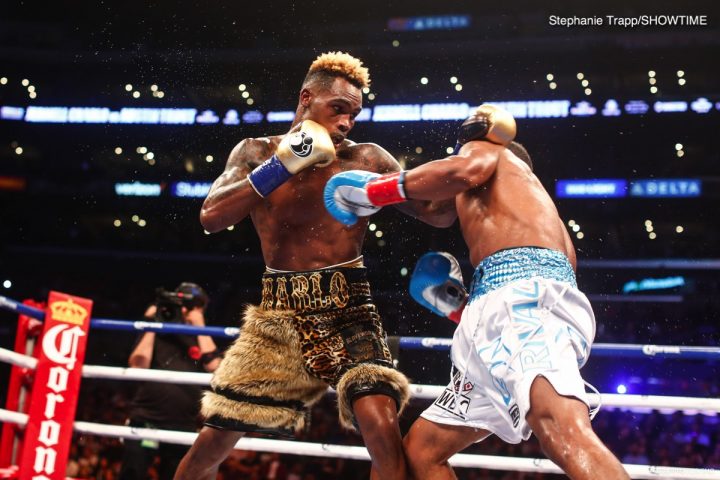 With the dislike WBC junior middleweight champion Charlo (31-0, 15 KOs) and Andrade (25-0, 16 KOs) have for each other, it’s surpassing that they haven’t fought each other. They’ve been criticizing each other for the past four years and yet they still haven’t fought. With Andrade now fighting at middleweight and signed with Eddie Hearn’s Matchroom Boxing to fight on DAZN in the U.S, it’s unlikely they’ll fight each other soon.

Here’s what Demerius Andrade had to say about Jermell Charlo on his social media site:

“Nothing new with this guy, Twin Charlo most disresepctful boxer in the sport! Where was he at 21 years old? Probably chasing Houston Texans JWatt for an autograph!” Andrade said on his social media. First of all, calling Liam Beefy Smith & Jaime Munguia15 bums isn’t true but shows how classless this clown is.”

This is what Charlo said in response:

”No, I didn’t get a chance to watch them bums fight, but I’ll let y’all know what I think in a few days.. f— what cha heard- It’s LionsOnly. Shut Yo [expletive] Up. At 21 I Was Chasing A World Champion Who Signed Up To Fight But Pulled Out The Fight A Week Before. BUM.”

Charlo vs. Andrade would be a great fight for the two of them. Andrade, 30, and WBO middleweight champion Billy Joe Saunders have been ordered to begin negotiations by the World Boxing Organization. However, with Andrade now signing with Eddie Hearn’s Matchroom Boxing stable, there’s speculation that he’ll not take the fight with Saunders and instead fight on his DAZN cards taking tune-ups for good money. In a sign that Andrade might not be accepting the fight with Saunders, he’s scheduled to take a tune-up on October 6 on a DAZN card against an opponent still to be determined in Chicago, Illinois. This would be an undercard slot for Andrade. Now that Andrade is with Hearn, it might prove difficult for a fight between him and Saunders to be put together because this would involve different British promoters working on the deal. Saunders is promoted by British promoter Frank Warren. Andrade has had one fight at middleweight against Alantez Fox since moving up to the 160 lb. weight division last October.

Andrade looked good in beating Fox by a one-sided 12 round unanimous decision. Since then, Andrade has been inactive. By the time Andrade does fight in October, he’ll have been out of the ring for precisely one year. That’s obviously not the greatest use of time for a fighter in the prime of his career like Andrade. The good news for Andrade is Hearn will likely keep him very busy with his career. The bad news is Andrade might not get a crack at a world title for a year or two if he doesn’t take the fight with Saunders. The best possible scenario for Andrade would be if Daniel Jacobs defeats Sergey Derevyanchenko to win the vacant International Boxing Federation 160 lb. title. Hearn could then have Jacobs defend against Andrade. It would be an in house Matchroom fight between Jacobs and Andrade. However, Hearn badly wants to match Jacobs against the winner of the September 15th rematch between middleweight champion Gennady ‘GGG’ Golovkin and Saul Canelo Alvarez, so it’s possible that he won’t make that fight. If Andrade would beat Jacobs, which is a very real possibility at this stage of the Miracle Man’s career, then it would wreck Hearn’s plans of matching him against the Canelo-Golovkin II winner. Andrade is a good fighter. It would be disappointing if Hearn is unable to get him a world title shot for another two years if he elects to have him swerve the title fight against WBO champion Saunders. Andrade, 6’1”, would have an excellent chance of defeating Saunders if that fight took place. Andrade would then be in line to face the winner of the Canelo-GGG 2 fight. Golovkin wants to fight for the WBO title, and Andrade would have the belt to make that fight happen. Hopefully for Andrade’s sake, Hearn makes the Saunders fight.

”LOLOLOL There you go!!!! As a fighter I wouldnt even call Larry Smith a bum, have mad respect for anyone who does what we do! Dont disrespect No Doubt Trout like that, you ended up fighting him anyway a few years later!! You wouldn’t have beaten Trout at 21, you barely beat Larry Smith at 21 and then stole #LionsOnly from him!!”

Charlo struggled to beat journeyman Larry Smith (10-36-1, 7 KOs) in defeating him by a 6 round unanimous decision on June 17, 2011. Charlo just barely won the fight, although the judges’ scores didn’t reflect how close the fight actually was. That’s not the only close fight Charlo has on his resume. He squeaked by Demetrius Hopkins in winning a narrow 12 round unanimous decision on June 8, 2013, and he beat Vanes Martirosyan by a controversial 10 round unanimous decision on March 28, 2015. A lot of boxing fans had Martirosyan winning that fight. Since 2016, Charlo has improved immensely in knocking out four out of his last five opponents. Charlo was looking great until recently when he struggled to defeat 32-year-old Austin Trout by a 12 round majority decision in his last fight on June 9 of this year. Trout (31-5, 17 KOs) came into the fight having lost two out of his last three fights in losses to Jarrett Hurd and Jermall Charlo. Jermell did not look as good beating Trout as those two fighters did.

Jermell is expected to face Hurd soon in a unification fight. The match is being built up still, but the two are expected to face each other in the near future. That would be an interesting match. A lot of boxing fans are leaning in the direction of Hurd to beat Charlo when that fight eventually takes place. The way that Jermell looked against Trout, he’ll have a hard time beating Hurd.