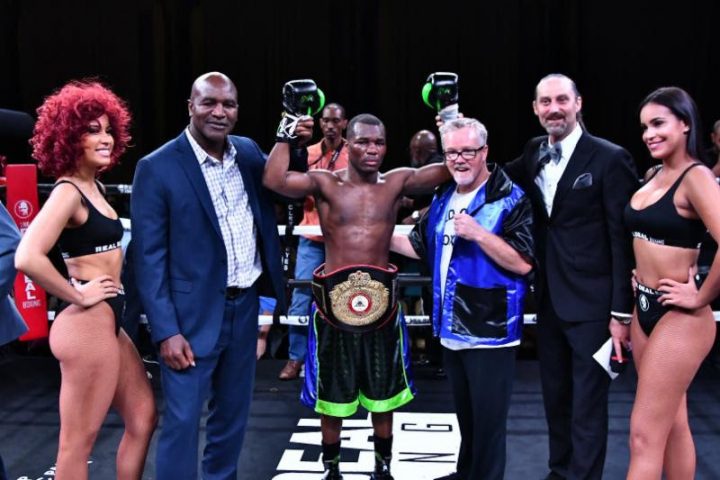 The Real Deal Boxing just celebrated it’s one year anniversary and now the company is proud to announce that the IBF has ordered a purse bid for The Real Deal Boxing’s Toka Kahn Clary (25-1, 17 KO) to face Kid Galahad (24-0, 15 KO) in a featherweight world title eliminator to be the mandatory title defense against England’s Josh Warrington (27-0, 6 KO).

“We have had multiple conversations with Kid Galahad’s team and we look forward to coming to an agreement for a fight between Clary against Galahad this fall.” explains, The Real Deal Boxing CEO, Sal Musumeci.

“We are willing to continue working on terms but we have no problem going to purse bid if that’s in the best interest of Toka. We have had extensive talks with venues and platforms based in the US and internationally who have expressed interest in working with us on this bout, but the top priority is putting Toka in the best position to win. The Real Deal Boxing is excited to, in just one year of existence, have one of our fighters in such an amazing position. We are confident Toka Kahn Clary will be the first of many world champions under The Real Deal banner.”

“Although we feel we have the best stable of undefeated blue chip prospects out of any current promotion, fighters that we believe will be the face of boxing over the coming years like Edgar Berlanga (8-0, 8 KO), JaNelson Bocachica (10-0, 8 KO) and Joshua Temple (6-0, 5 KO) to name a few, it’s always important for a new promotional outfit to prove that they have the ability to guide a legitimate contender to a title shot like in the case of Toka.” says, The Real Deal Boxing COO, Eric Bentley.

“I think we’ve proven that The Real Deal Boxing is a place for fighters of all levels who want a promoter that keeps them busy in the ring but cares for them outside of it and has the experience and connections to guide them to major opportunities. In addition we are truly trying to change the sport for the better for fans and fighters. From the judging, scoring and safety initiatives that we are doing with our WBC Tournament, we hope to take these changes to commissions across the country and the world.”

As 4x time heavyweight champion and co-founder The Real Deal Boxing, Evander Holyfield adds, “I knew when we signed Toka, he would be our first fighter to earn a title shot and now he’s one fight away from doing just that. Teaming up with Freddie Roach has brought out a whole new side of Toka and we can’t wait for him to get the opportunity he’s worked so hard for. It’s been an amazing first year for the The Real Deal Boxing and having Toka in line for a shot at the mandatory is very exciting and shows the boxing world that we are The Real Deal.”

Created The Jose Sulaiman World Invitational Tournament, a bracket style elimination tournament held in conjunction with the WBC where 8 fighters representing their home countries compete to be in position to fight for the WBC Welterweight World Title. The first round took place this past April in Kentucky at the KFC Yum Center and was broadcast internationally. The second round is scheduled for August 25th in Toronto, Canada.

Used the WBC tournament to create several new initiatives for the sport including changes to judging, scoring, introducing instant replay and having state of the art pre and post fight medical requirements. The initiatives have received interest from multiple commissions interested in adopting them into their own rules and regulations.

Created a ongoing showcase series at the renovated Kings Theatre in the Flatbush area of Brooklyn to promote New York area prospects.

Promoted a fight in the running for Upset of the Year when veteran fan favorite, Francisco Santana defeated Olympic Gold Medalist and World Title Challenger, Feliz Diaz in the first round of the Jose Sulaiman WBC World Invitational Tournament.

We wouldn’t be here without you! Thanks to all the media that has supported us in our first year. The Real Deal Boxing staff and our fighters are always available to talk.

« James Jazza Dickens vs. Martin Ward off but show must go on