Hearn wants Khan-Brook after their next fights 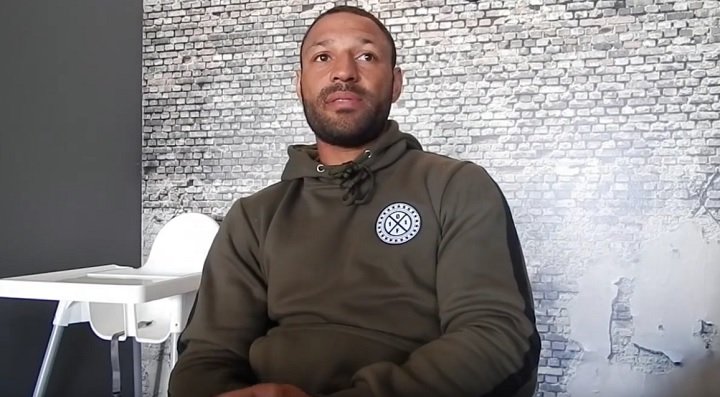 By Scott Gilfoid: Amir Khan and Kell Brook could finally be squaring off in December if they win their next fights, according to promoter Eddie Hearn. Both guys are scheduled for tune-up fights. Of course, Hearn isn’t calling them tune-ups, but that’s what they are. Hearn says Khan and Brook will be literally kicking themselves if they fail to fight each other, as they can make a ton of money in the UK on Sky Box Office PPV.

Both fighters are highly ambitious in their respective weight classes, but neither of are a lock to win titles at this point in their careers.

Khan (32-4, 20 KOs) faces Samuel Vargas on September 8, while Brook (37-2, 26 KOs) fights Brandon Cook (21-1, 13 KOs) on July 28. With the soft match-making Hearn has done for Khan and Brook, it’s safe to say they’re going to win their next fights with flying colors. Vargas (29-3-2, 14 KOs) isn’t a knockout puncher, and he only has one KO on his record in the last three years. What’s significant about that is Vargas has been fighting fodder level opposition for the most part. The only good fighters he’s faced, Danny Garcia and Errol Spence, both knocked him out.

“After [their next fights], we’ll be looking to get that fight signed. It’s the biggest fight out there, but both have options,” Hearn said to skysports.com. ”Fingers crossed – December, if they can both keep winning, we’ll get there for Khan vs. Brook.”

What is Hearn talking about in saying “fingers crossed” about Khan and Brook’s next fights? Of course, they’re going to win. With the guys Hearn matched them against, they’re a shoe in to get the ‘W’ in their tune-up fights.

It would take a lot for Khan and Brook to lose their next fights. For starters, the Khan-Vargas and Brook-Cook fights are taking place in the UK in front of their loyal boxing fans. Secondly, Vargas and Cook are non-punchers. Thirdly, they’re slow of hand and foot with limited talent. As such, the fights are total mismatches from the word go. Hearn did a good job of scouring the 147 and 154lb weight divisions to find guys that wouldn’t wind up being a banana peel for Khan and Brook. I mean, these are guys that they can beat in their sleep. The only way Khan and Brook lose these fights is if they’re entirely careless or if they suffer a bad injury. The often injured Brook is the most at risk of the two due to his eye problems. He suffered broken eye sockets in two out of his last three fights against Gennady Golovkin and Errol Spence Jr. However, those are big punchers with a lot of talent. Brook has spent most of his career fighting non-punchers. He just has three fights – GGG, Spence and Shawn Porter – in which he fought fighters with power.

“He can drop back to welter for Khan, who also has options – Manny Pacquiao, Danny Garcia, Errol Spence Jr.,” Hearn said. “But they will kick themselves forever unless they get it over the line.”

That’s a pretty strong message from Hearn in letting Khan and Brook know that he wants them to face each other in December to prevent mishap. Hearn says that Brook wants to fight the Charlo brothers and Jarrett Hurd in the future. Obviously that would be AFTER he faces Khan on Sky Box PPV. Hearn isn’t going to let Brook risk his hide against talents like Hurd and the Charlos. Those guys would likely be big favorites to beat Brook. Hearn is positioning Brook to fight WBO junior middleweight champion Jaime

Munguia. Brook’s fight against Cook is a World Boxing Organization 154lb. title eliminator. The winner becomes the mandatory for Munguia.

Khan was successful in his comeback fight last April in stopping the serviceable Phil Lo Greco in a 1st round knockout in Liverpool, England. Hearn did a good job finding 33-year-old Lo Greco for Khan to fight, as the Canadian fighter had little in the way of hand speed to trouble him. As slow as Lo Greco was, he stood no chance of beating Khan. Amir had been out of the ring for two years before hat since his 6th round knockout loss to Saul Canelo Alvarez in 2016.

There was a lot of question marks about whether Khan would be the same fighter after being knocked out viciously by Canelo and then sitting out of action for two years. As far as I can tell, Khan looked as good as he’d been before his long layoff. The only thing that changed is the level of Khan’s opponent. Rather than face a good opponent, Khan was matched against a weak opponent.

Brook snapped his two-fight losing streak by beating Sergey Rabchenko by a 2nd round knockout in Sheffield, UK. The fight was supposed to have been a competitive one, according to Hearn, but it turned out to be a complete wipeout when Brook smashed Rabchenko in two rounds. It was a good performance by Brook in stopping a guy that at one time was considered a solid contender at 154. Either Rabchenko as lost something from his game or Brook is a better fighter at 154 now that he no longer has to drain himself to make weight at 147.

Before the win over Rabchenko, Brook lost to Errol Spence Jr. and middleweight champion Gennady Golovkin by knockout. Brook didn’t need to fight either of them, but he chose to take the risks anyway. Hearn was all for Brook facing GGG. In fact, Hearn offered the Golovkin fight to Brook after GGG vs. Chris Eubank Jr. negotiations failed to progress. But after Brook lost to Golovkin by a 5th round knockout in September 2016, Hearn didn’t sound like he thought it was a good idea for him to drop back down to 147 to defend his International Boxing Federation welterweight title against Errol Spence Jr. It turned out to be a bad idea for Brook, as he was stopped in the 11th round by Spence in May 2017. Brook had his moments in the fight, but ultimately he was forced to quit on one knee by Spence after he suffered a fractured eye socket.

Khan, 31, takes credit for setting the wheels in motion for the big money fight against Brook to finally take place by signing with Hearn’s Matchroom Boxing stable. Had Khan not signed with Hearn, it’s unclear whether the fight would be in the position where it is about to take place for December.

“I let him bark and talk, now he’s getting out of his boots and needs to be put in his place,” Khan said about Brook to skysports.com.

Khan went on to say that the only way he’s going to be fighting Brook is if he moves down to 147. Khan has no intention of moving up to 154 to fight Brook at junior middleweight. Khan had a bad experience after he moved up two weight classes to challenge Saul Canelo Alvarez for his WBC middleweight title in 2016. It’s very likely that Brook is going to accommodate Khan’s wishes by moving down to 147 because it gives him a chance to get a career high payday, and he’s not going to pass that opportunity up.

Boxing » Amir Khan » Hearn wants Khan-Brook after their next fights