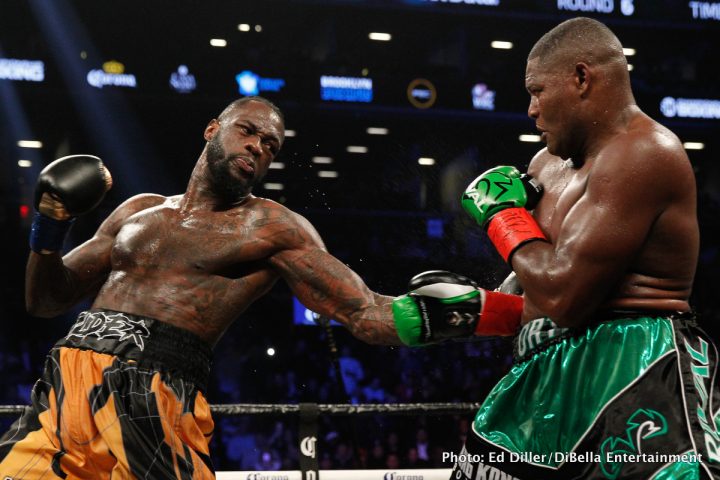 By Scott Gilfoid: Matchroom Sport promoter Barry Hearn believes that WBC heavyweight champion Deontay ‘Bronze Bomber’ Wilder feels jealousy towards his fighter Anthony Joshua because of the success that he’s having with his career and the money he’s making. Hearn says Wilder has a chance to fight Joshua still if he signs the contract for $15 million to face him on April 13 in 2019 at Wembley Stadium in London, England.

Hearn states that this is the same deal that Wilder already agreed to take for a fight against AJ this year. However, the deal would be a flat fee $15 million, and Joshua will likely get much more than Wilder. Deontay now says he wants a 50-50 split of the revenue for him to agree to the fight

I don’t think for a second that Wilder is jealous of the 6’6” Joshua. I think it’s more of a case of Wilder wanting to fight Joshua for the sake of proving himself as the best heavyweight on the planet. As far as the money goes, Wilder wants a fair deal for the amount of money he’s helping bring to the table. It’s understandable that Wilder wants an even 50-50 split after being offered just $15 million for a fight that could potentially pull in $100 million. That would give Joshua an 85-15 split of the revenue. Wilder wouldn’t even be getting the same split that a mandatory challenger would be receiving to face Deontay Wilder. You have to wonder what Hearn and his son Eddie Hearn think of Wilder for them to be offering so little for a fight of this magnitude. It makes me think that they believe that he’s desperate enough to take the fight with a tiny $15 million flat fee.

“There is a contract on [Wilder’s] people’s desk which says: April 13, 2019, Wembley Stadium,” Hearn said to Sky Sports News. “The contract encapsulates all the terms that you agreed. We appreciate Wilder isn’t making any money. He probably looks at Joshua with a good degree of jealousy.”

With the negotiations with Wilder’s management having fizzed, Joshua will now be defending against his World Boxing Association mandatory challenger Alexander Povetkin (34-1, 24 KOs) in September. The fight is expected to be shown on DAZN in the U.S for boxing fans interested in subscribing to the service. It’s not a great fight, so I would be surprised if more than a tiny handful of fans choose to watch it.

Hearn says the fight with Wilder is on the table for next April, but if he doesn’t agree to the $15 million, then they’ll move on and fight someone else for IBF/WBA/WBO heavyweight champion Joshua. It sounds like that’s exactly what will happen unless Wilder is willing to swallow his pride and agree to the smaller money for the fight. Joshua is going to need to give Povetkin a good enough deal for the fight to take place; otherwise it will wind up going to a purse bid. Joshua isn’t ready to be stripped or vacate his World Boxing Association heavyweight title yet. But he also isn’t ready to offer WBC champion Deontay Wilder a big enough purse to try and win the last title not in his possession.

If and when Wilder does eventually agree to face Joshua, he’s going to need to make sure his management scrutinizes the referee and judges that work the fight to make sure they’re happy with officials. In Joshua’s last fight against WBO heavyweight champion Joseph Parker, there was a referee Giuseppe Quartarone, who talk away the inside by pulling the two fighters apart all night long. It surprising that a referee like that would be assigned to a fight as important as the Joshua vs. Parker fight. You have to believe that poor officiating could happen again in Joshua’s future fights unless his opponents are on the lookout and raise objections when they see something odd that sticks out. Obviously, Wilder wouldn’t be impacted by a referee that prevents inside fighting, but you never know. It’s bad when you get a referee that looks like he’s out of

his league in working a fight between world champions. The referee that worked the Joshua-Parker fight looked like he didn’t belong inside the same ring with them.

“Wilder has something in front of him where he can plan his future. He can earn five or six times more than he’s ever earned in his life,” Hearn said. “You either want the fight or you don’t want the fight. AJ is giving you the opportunity. Paying you $15m to live the dream. “

It’s interesting how Hearn is trying to persuade Wilder to agree to the offer he wants him to take by talking about how he can make 5 or 6 times more than he’s ever made before, as if that matters. What really matters if the extra boxing fans that Wilder will be bringing to the table for the fight, as well as giving him a fair purse split rather than a flat fee that is given to lesser fighters.

If all Hearn is going to offer Wilder is a flat fee of $15 million, then I don’t think he should ever agree to that. At some point after Joshua exhausts all his fights against the top contenders in the division, he’ll look Wilder’s way and be ready to give him the 50-50 purse split that he’s asking for. The reason he’ll do that is because Joshua’s popularity will likely start nose diving once he’s finished fighting the few notable contenders in the division. I mean, these are the only guys left for Joshua to fight that anyone in the UK will care about seeing:

Joshua will clean out that small group of fighters by 2019 and have no one left to fight but Wilder. It’ll be embarrassing if Joshua starts defending against Charles Martin, Manuel Charr, Trevor Bryan, Tony Bellew, Dereck Chisora

In the future, Joshua will be able to fight Joe Joyce and Tony Yoka. I doubt the fights will be huge because neither of them is facing good opposition to raise their profile since turning pro.

Wilder should put Joshua on ignore and do his own thing. If I was Wilder, I wouldn’t even call Joshua out anymore after receiving the pitiful $15 million offer from him. I would just keep winning and if Joshua one day wants to fight me, he’ll come up with 50-50 asking price for the fight to happen. In the meantime, Wilder shouldn’t be bothering to mention Joshua’s name with the boxing public because he’s only helping him out. Joshua doesn’t sound like he’s interested in giving Wilder a fair deal, so it’s a waste of time to even talk about him. One of these days Joshua and Matchroom will be willing to give Wilder

the 50-50 deal he wants. If Wilder wants to score points, he’ll dismantle Matchroom fighter Dillian ‘The Body Snatcher’ Whyte if he doesn’t get knocked out by Parker first in their fight this month on July 28. If Wilder smashes Whyte, he’ll create more popularity in the UK and increase his chances of getting the 50-50 deal that he wants for the Joshua fight. I doubt that Whyte will beat Parker. Wilder won’t gain much popularity for beating Whyte after he loses to Parker.