Donovan teams up with ‘old friend’ Egan for title chase 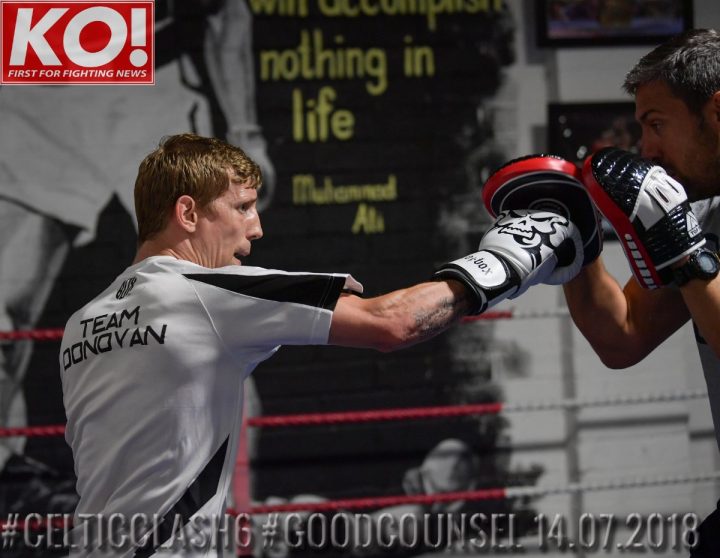 July 14th could be a massive date in the professional career of Eric Donovan as the Athy featherweight has taken Olympic medallst and former teammate Kenneth Egan on board as coach as the pair hunt a European title shot together.

The reigning BUI Celtic champion, fights for the eighth time, headlining his fourth show, and will finally become eligible for the European rankings. Needing eight fights on his record before the European Boxing Union will consider him, Donovan hits this milestone when he tops the ‘Celtic Clash 6’ bill at Good Counsel GAA Club in Drimnagh, Dublin this Saturday night.

A lack of willing opponents in Ireland has stalled Donovan’s dream of claiming an Irish professional title to go with his five amateur crowns, and ‘Lilywhite Lightning’ now looks set to bypass to continental level. The current European champion is Spaniard Marc Vidal who soon defends against Kiko Martinez – remember him? – and Donovan, for now, is targeting the new European Union champion Andoni Gago.

Another Spaniard, the hugely experienced Gago won the EU title in April following a war with Frenchman Geoffrey Dos Santos. The rough and tough Basque boxer is no pushover, last year going nine rounds with world champion Lee Selby on short notice while also drawing with former champ Victor Terrazas. Donovan and his manager, Sligo’s Leonard Gunning, however, are fully confident that they can dethrone ‘El Macho’ and moves are already being made to set up a fight, in Ireland, in the near future.

Southpaw Donovan is keen and stated that “I’d love to fight him, I really would. I’m under no illusion, he is a very seasoned professional and was a very worthy winner [v Dos Santos]. He’s an absolute workhorse and a ‘menace’ in the ring as I would describe it. He does not stop fighting, punching, and if I do get the fight I’m going to need to be one hundred percent physically and mentally ready – and I will be, I wouldn’t go into a fight with any less. It’s given me a lot of confidence knowing that these type of fights, these type of opportunities are only around the corner.”

“When I started out on this journey, some people were saying to me ‘are you crazy? You should have done this years ago’, stuff like that. It’s not that I’m out to prove them wrong, I’m out to prove to myself what I can do. I know I can beat Gago, I know I have the skills to beat him, I know I have the intelligence to beat him, what I would need to do is get physically prepared. By the time the chance comes for me, and I don’t even know if he’ll be champ by then but, if he is, and that fight presents itself, oh man I would take that at the drop of a hat.”

Of course, all this talk will be worth nothing if Donovan cannot get the win on June 16th. With two eight-round bouts under his belt, he will fight over this distance again against a durable opponent as he builds toward the ten-round distance over which EU title bouts are contested. The 32-year-old has had to overcome his first major injury in the pros too, having been splinted up for weeks without punching to resolve a long-standing hand issue – which scans revealed was a fractured finger.

Back with the bit between his teeth, the ever-improving, evergreen Donovan outlined how “now I am training like that champion I know I am going to be, that European champion and that goal I set myself. I am not the biggest puncher in the game but I have other strengths that far outweigh that, my hand speed, combinations, footwork and so on. All my career was long distance counter punching, now I am more comfortable setting my feet in the danger-zone and trusting in my hands. I trying not to forget the fundamentals too.”

“I’ve never been as physically strong or as healthy in my life. I feel that I’ve got a new mature head, a new perspective on life. I’m not boxing to hold on to funding, I’m not boxing to qualify for the Olympics, I’m just boxing for the same reason I was when I walked into the gym as a seven-year-old kid – because I can express myself and it’s something that I love to do, that makes me really happy. I’m back in that place now.”

Tickets for the fight night are priced at €55 (ringside), €35 (unreserved) and are available from the boxers involved. Tickets from Eric Donovan can be bought from the Healthy Living Centre, 2 Duke Street, Athy, County Kildare, or by calling Laura on 086 7949 406.