By Scott Gilfoid: Dillian Whyte (24-1, 17 KOs) edged former WBO heavyweight champion Joseph Parker (24-2, 18 KOs) in defeating him by a questionable 12 round unanimous decision on Saturday night at the O2 Arena in London, England.

The 12th round was incredibly exciting with Parker putting Whyte on the deck after landing a peach of a right hand to the head. To Whyte’s credit, he got back to his feet and somehow bad it out of the round. If there had been another 30 seconds in the round, Parker would have finished Whyte for sure.

Whyte knocked Parker down twice in the fight in dropping him in round two and nine. On replay, the knockdown in the 2nd from Whyte was from a textbook head-butt that put Parker down hard on the canvas. The referee Ian John Lewis, who had bad night at the office, counted it as a knockdown. To his credit, Parker came back later in the fight and dropped Whyte in the 12th round with a right to the head in the last seconds of the fight. The referee Lewis allowed Whyte to get away with roughhouse tactics the entire fight. Whyte was throwing rabbit punches, head-butting, holding and hitting and pushing Parker out of the ring. The sheer number of fouls that Whyte got away with was mind-boggling. The head-butt knockdown Whyte was given credit for what extremely troubling, as well as all the fouling he got away with. The referee seemed to be just hanging around and not doing a very good job of controlling the fight. Blowing the call on the second round knockdown was bad, but letting Whyte get away with fouling Parker all night was far worse. You can argue that Whyte should have been docked three points for fouling at the very least.

”It was a good fight,” Whyte said afterwards. ”He’s slick and I knew he was going to fight for the first few rounds then come back in the final few rounds. I am annoyed I slipped in the final hurdle in the last round. I was rocked and I took a knee. I would like to fight Joshua again if he wants it. I’ve still got a lot to learn, so I would like to get one more in before him,” Whyte said. 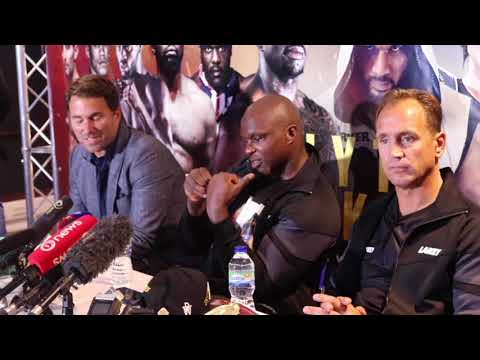 Whyte didn’t slip in the 12th. He was dropped from a howitzer of a right hand from Parker. That shot was devastating from Parker. I don’t know why Parker didn’t come at Whyte like that in the previous 11 rounds, because if he had, he would have knocked him clean out.

Whyte’s poor showing tonight makes it hard for his promoter Eddie Hearn to justify putting him in with Anthony Joshua on April 13 at Wembley Stadium in London, England. That would look really bad if Hearn tried to peddle the Joshua vs. Whyte 2 rematch after the way that Whyte looked tonight. Parker doesn’t deserve a rematch with Joshua either. The only guy that rates a fight against Joshua is Deontay Wilder, but that fight isn’t about to happen with the way that Hearn is being so stingy and tight-fisted with the money he’s offering Wilder.

Despite being on the receiving end of a controversial decision, Parker showed class at the end of the fight. Instead of bellyaching about the results, Parker took the high road and gave the fouling Whyte credit.

”What a great opportunity to come and fight in the UK for a third time,” Parker said to Sky News after the fight. ”We knew it would be a tough challenge. Whyte was so strong and is still progressing. We are still young. I say congratulations to Dillian. I gave it my best. The better man won. I will come back stronger.”

The controversy of tonight’s Whyte vs. Parker results now puts pressure on Hearn to try his level best to make the Joshua vs. Wilder fight. Hearn isn’t going to be able to sell a rematch between Joshua and Whyte now to the British boxing fans, because of how truly awful Dillian looked against Parker in winning a controversial decision. Additionally, Hearn won’t be able to stick American Jarrell ‘Big Baby’ Miller in with Joshua because that fight won’t sell on April 13. The casual boxing fans in the UK have no idea who the recent Matchroom signee Miller is, and they’re not going tom come out in high numbers to see it live at Wembley Stadium, which is being retrofitted to 100,000 from 90,000.

Hearn’s silence about Whyte’s win afterwards speaks volumes. If Hearn had been impressed with Whyte’s performance tonight, he would have been standing on a soapbox and crowing as loud as can be to the fans, telling them how he can’t wait to stick Whyte in with Joshua on April 13. As bad as Whyte looked tonight, Hearn didn’t dare mention wanting to match him against Joshua on the 13th of April. If Hearn had done that, he would have been booed out of the arena by the fans. Hearn knew better.

The best possible thing Hearn can do is stick Whyte and Parker back in together so that they can straighten out the controversy of the fight. They need three good judges and a quality referee that knows how to control fouling so that Whyte doesn’t go into his big time wrestling mode like he was doing tonight against Parker.

Parker out-boxed Whyte throughout the contest. I mean, the judges didn’t give Parker credit for boxing circles around Whyte, but he clearly out-boxed the 30-year-old. Whyte was done for the most part after he dropped Parker in the 9th. The expenditure of energy for Whyte gassed him out for the remainder of the fight, allowing Parker to dominate rounds 10, 11 and 12.

It sounds like Parker would like a rematch with Whyte. I hope he doesn’t hold his breath waiting for that to happen because I don’tn think it will. At best, Parker might be given a shot at facing Dereck Chisora, but not Whyte.