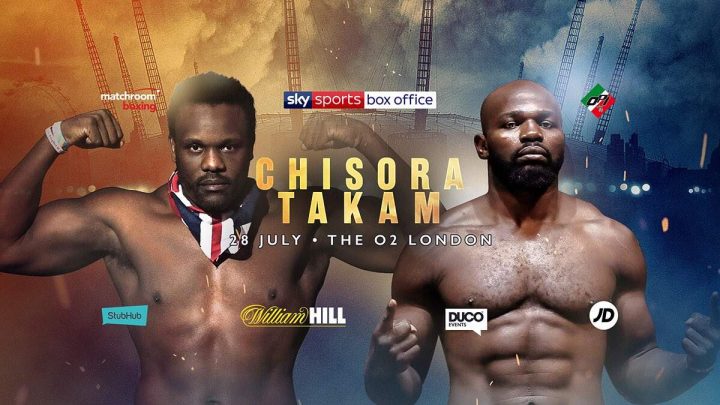 By Trevor McIntyre: In a battle of aging former heavyweight world title challengers, Dereck ‘Del Boy’ Chisora (29-5, 21 KOs) stopped Carlos Takam (35-5-1, 27 KOs) in the 8th round on Saturday night at the O2 Arena in London, England. Going into the 8th round seemingly well behind in the fight, the 34-year-old Chisora dropped Takam with a big right hand at the start of the round.

Takam, 37, was able to get back to his feet, but Chisora sent him down for a second time. The referee then halted the contest.

Takam landed well in the 7th round, and he appeared to be on his way to getting an eventual stoppage over Chisora. The mistake that Chisora was making was he was spending too much time against the ropes and no enough time in center ring exchanging shots with Takam.

Chisora fought well in the 6th round, landing some big punches against the tiring Takam.

It was a big win for #11 WBC Chisora, who stays in the hunt for an improbable heavyweight title shot. Chisora will need to keep winning for a year or two before he has a chance of getting a second world title fight. It’s unlikely Chisora will get a title shot against WBC heavyweight champion Deontay Wilder in a voluntary defense. Chisora will probably need to earn a mandatory shot.

In round one, Takam backed Chisora up against the ropes and then unloaded on him with a series of hard power shots to the head and body. Chisora was playing rope-a-dope against the rings. He landed some nice shots in the last part of the round. However, Takam did the better work by far.

”I am bad, but when I step in this arena, I want to fight for the fans,” Chisora said after the fight. ”It’s up to the fans who I fight next. Whoever twants it can have it. I definitely want the winner of the main event. Ibiza, here I come.”

Chisora facing the winner of the Dillian Whyte vs. Joseph Parker fight would be an excellent fight. However, those two likely won’t be interested in facing Chisora, as they want to step inside the ring with Anthony Joshua on April 13 at Wembley Stadium in London, England. Chisora is a small money fight in comparison, and a needless step for the winner of that fight. A better fight for Chisora is domestic fighter Dave Allen. Chisora vs. Allen would be a fun fight to watch. Chisora should be able to win if he’s 100 percent. Chisora vs. Joe Joyce would be a good fight as well, although it’s doubtful the fight will happen.

Takam is tough. I realized I couldn’t trade with him toe-to-toe, I knew the overhand right could catch him,” Chisora said. ”In that round, it was time to send it home. He didn’t hurt me. I’m English, nobody can hurt us.”