Broner wants Khan, tells Hearn, “Give me my money” 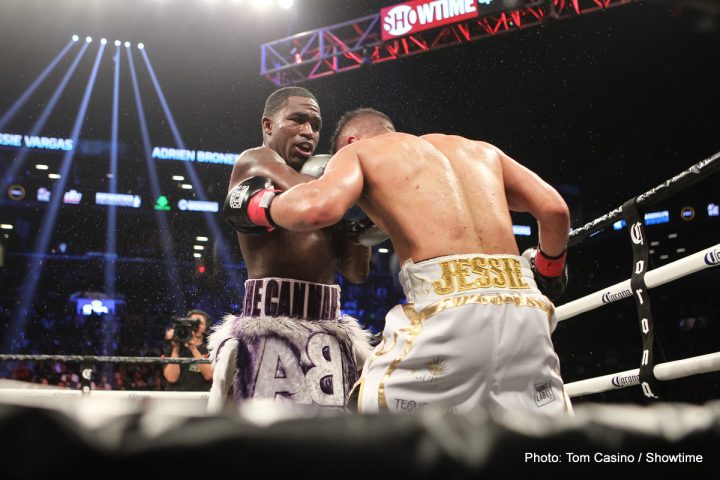 By Jeff Aranow: Adrien ‘The Problem’ Broner wants to fight Amir Khan next and he’s hoping the British fighter’s promoter Eddie Hearn will pay him his asking price to make it happen. It’s unknown how much Broner would want to take on Khan, but it would likely be a nice payday. Broner, 28, recently rejected an offer to join Hearn’s stable.

Broner (33-3-1, 24 KOs) then posted the offer from Hearn on his social media site and ridiculed it. Hearn wanted to sign Broner to have him fight on his DAZN cards, but the offer that he made to him clearly wasn’t to his liking. It appears the negotiations died after Broner posted Hearn’s offer on his Twitter site.

”I love that fight. Tell Edie Hearn give me my money,” Broner said to ES News Reporting.

Broner vs. Khan would be a good fight for the boxing public. Whether Hearn would have the inclination and the money to make the fight is another question. Of the top fighters at 140, Broner would be one of the most beatable for Khan (32-4, 20 KOs).

Broner is not a big puncher like WBC interim light welterweight champion Regis Prograis and WBA 140lb champion Kiryl Relikh. The only thing that Khan would need to worry about in facing Broner is getting outworked by him. Broner is a volume puncher, and he does well when he can trap an opponent against the ropes.

Without Khan, 32, telling Hearn to go out and make the Broner fight, it’s probably not going to happen. Putting the fight together might prove to be a nightmare, especially if Broner posts the offers on his social media site.

There was talk recently of Floyd Mayweather Jr. giving Broner $50 million for him to fight for his promotional company. Whether the rumors are true or not is unclear. $50 million would be a lot of money for a struggling fighter like Broner to get. The former four division world champion Broner hasn’t won a fight since beating Adrian Granados by a controversial 10 round split decision last year on February 18.

In Broner’s last two fights, he fought former two division world champion Jessie Vargas to a 12 round draw on April 21 on Showtime Boxing, and lost to Mikey Garcia by a 12 round unanimous decision on July 29, 2017. Broner’s career has lost momentum since 2013. From 2008 to 2013, Broner was capturing division world titles and winning over a lot of boxing fans with his performances. However, Broner hasn’t looked like the same fighter since losing to Marcos Maidana in 2013. That loss took the air out of Broner’s career, and he’s been beating lesser guys more or less ever since.

Hearn has other plans for Khan in 2018. He’s facing welterweight contender Samuel Vargas (29-3-2, 14 KOs) on September 8 at the Arena Birmingham in the UK. After that, Hearn wants to match him against former IBF welterweight champion Kell Brook in December. Khan is talking about wanting to challenge WBA ‘regular’ welterweight champion Manny Pacquiao. Hearn might try and put that fight together, but it would likely require that Khan take less money in order to accommodate Pacquiao’s purse requirements. That would be a much bigger fight for Khan than facing Broner, who seems to be on the slide at this point in his career.