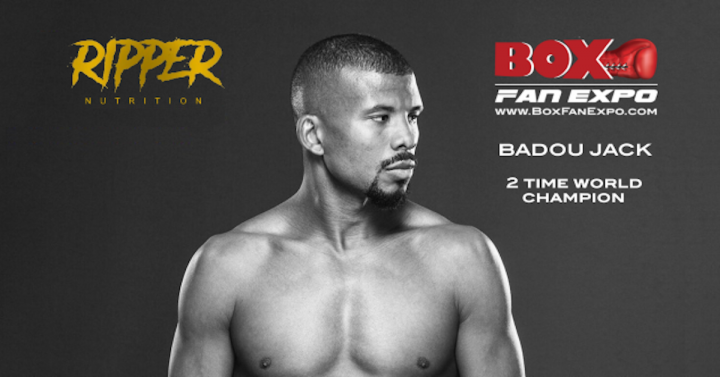 Two-Time World Champion Badou Jack has confirmed that he will appear, have a booth and hold a Meet & Greet with his fans at the Las Vegas Convention Center for the fourth Annual Box Fan Expo on Saturday September 15, 2018 from 10am to 5pm, during Mexican Independence weekend.

Jack will once again appear at this year’s Expo where he will be introducing and showcasing his new “Ripper Nutrition” http://rippernutrition.com products. Jack will be signing gloves, photos and merchandise. Boxing fans will also have a great opportunity to take pictures with this boxing star also known as “The Ripper”.

The Swedish professional boxer, who is promoted by Mayweather Promotions, held the WBC Super Middleweight title from 2015 to 2017. On April 24, 2015 he defeated Anthony Dirrell to win the WBC championship belt and defended it successfully against George Groves at the MGM Grand Las Vegas on September 12, 2015 during Mexican Independence weekend. He competed in a 2017 Fight of the Year candidate against James Degale that ended in a majority draw at Barclays Center in Brooklyn last January. He made his light heavyweight debut by defeating WBA World Champion Nathan Cleverly in August 2017 and recently came off from an incredible performance that resulted in a draw when he faced WBC Light Heavyweight Champion Adonis “Superman” Stevenson this past May in Toronto, Canada. The fight was co-promoted by Mayweather Promotions.

About Ripper Nutrition
Ripper Nutrition, is co-founded by 2-division world boxing champion Badou Jack. It was formed to create the cleanest and purest supplements, providing athletes and fitness enthusiasts of all levels an edge in both training and competition.Ripper Nutrition is a brand worthy of world champions because it was built by a world champion. These supplements are caffeine-free, made with high-grade ingredients that are safe for competition, and come enriched with Lunasin, a powerful antioxidant that clinical studies have shown to reduce inflammation, support heart health, and boost your immune system.

Exhibitors such as boxing gear, apparel, new equipment’s, energy drinks, alcohol, supplement products, broadcasting media, sanctioning bodies and other companies who wish to participate will once again have a chance to showcase their brand to fans, media and the boxing industry.

Tickets to the Box Fan Expo are available online at:
boxfanexpo.eventbrite.com