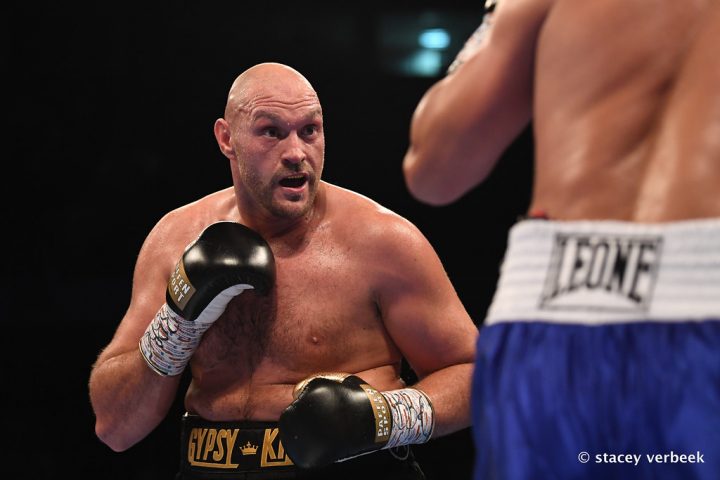 By Tim Royner: Tyson Fury looked absolutely terrible tonight in stopping 2nd tier cruiserweight Sefer Seferi (23-2, 21 KOs) by a 4th round stoppage on Saturday night in his comeback fight at the Manchester Arena in Manchester, England. Fighting for the first time in 2 ½ years, the much larger 6’9” Fury used his size to land pot shots against the shorter and much lighter 210 pound Seferi.

The fight ended when the 39-year-old Seferi opted not to come out for the 5th round. Fury had connected with a hard right uppercut and right hand during the 4th, and that may have made Seferi choose not to want to risk it by coming out for the fifth. It looked to me like Seferi was simply tired and discourage due to his size disadvantage.

The fight looked more like a WWE wrestling match than a true fight. Fury frequently held arms out to his sides in the first two rounds, inviting Seferi in to land shots. Seferi took the flabby looking 29-year-old Fury up on his offer by charging forward occasionally and nailing him with head shots. Fury was holding his arms out in front of him to keep Seferi from getting in close. Fury would also retreat to the ropes to keep from getting hit. Both fighters used the Ali shuffle in round 2. The shorter Seferi was on the move constantly, using his fast footwork and superior conditioning to keep the larger fighter Fury from getting at him with shots. Seferi didn’t land more than two punches in the round, as he was too much on the move and not letting his hands go the way he needed to.

In round 3, Fury shoved Seferi down on the canvas in a classic WWE move. By that point in the fight, the match looked more an exhibition fight than a true fight. The two were touching gloves frequently, as if they were close friends, and it didn’t look like a real boxing match at all. Fury landed several hard right hands to the head of Seferi that got his attention. Seferi looked hurt at one point in the round, but Fury was too tall, uncoordinated and gangly to finish the job.

In the 4th round, Fury timed Seferi perfectly in hitting him with right hands when he was charging forward attempting to land. Seferi had no choice but to charge Fury like a baby Rhino as he didn’t have the size to get to his chin due to his long reach. It wasn’t surprising that Seferi quit on his stool at the end of the 4th because he was going to get knocked out sooner or later had he kept fighting.

All in all, it wasn’t a fight that showed that Fury has a chance against any of the current top 5 heavyweights in the division. Had this been Deontay Wilder inside the ring tonight, he would have poleaxed Fury with a right hand in the 1st round, and it would have been over. There’s no chance that Fury would have made it out of round 1 against Wilder. Fury would likely made it to the 2nd round against Anthony Joshua, because he’s not the same kind of puncher that Wilder is, and he’s more cautious and not nearly as brave.