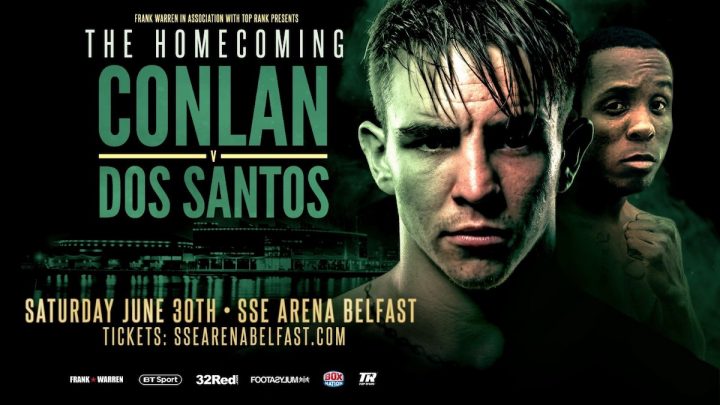 The fight which is televised live on BT Sport, BoxNation and the ESPN+ in the USA is Conlan’s first fight in his home city since he competed in the Ulster amateur championships in February 2011.

There are three title contests on the card. Jack Catterall’s WBO Intercontinental Super-Lightweight title defence against Tyrone McKenna, Jono Carroll risks his IBF Super-Featherweight belt against fellow Dubliner Declan Geraghty in a rematch and the vacant Celtic Super-Bantamweight championship is on the line when unbeaten pair Tyrone McCullagh and Joe Ham meet.

“I’m delighted to be back. It is a long time since I have boxed here and getting in front of that crowd will be a huge buzz. Once I walk out there it is game time and I’m ready to go. I have had support from all over the world since Rio. Top Rank have done a great job and made New York feel home from home. I want that rematch with Vladimir Nikitin who got that decision in the Olympics and now Top Rank have signed him, it will happen. They went out of their way to sign him because it has to happen. Dos Santos is a big puncher who is dangerous when he throws hooks and it’s a step up. If I was fighting a nobody fans wouldn’t come. I will have an assassin’s mentality and be destructive. There’s hype around me but I won’t let it get to my head.

“We’re thrilled to be working with the Conlan family. Michael has been fighting all over the world and we’re thrilled to make this happen. It is up to Michael how quickly he wants to move, but we’re moving up the competition with Dos Santos. A world title challenge could be inside one and a half years.

“I’m excited for this fight, but it is a chance for me to showcase what I have been working on. His height isn’t an issue. There is always a way to beat people. I can’t remember much about our sparring to be honest. I want to get the stoppage and to put on a good fight. At the end of the day I want to come out on top. I’m not worried about being the away fighter. Everyone has welcomed me in Belfast and we both have respect.

“Jack has been a dream to work with and with him being so talented it makes my job ten times easier. Jack has shown massive improvements in our five months and he will take it to another level. You’ve not scratched the surface with Jack and over the next three years he will go on and on.”

“I could have got an easier fight, but if I wanted it easy I wouldn’t be boxing. I believe in myself and want to be world champion so when I got the call to fight Jack I took it. Jack is a talented fighter and it is going to need a career best performance from me to win. We have sparred and it was sweet. We were both starting our camps and nobody was on fire. It is about what happens on the night and I can adapt, but I have to be switched on. Jack is world class.”

“He wasn’t winning the first fight before he was disqualified. He was like Bambi on ice when I hit him. I am looking forward to setting the record straight and Declan is going to get knocked out. It’s an easy night’s work. I am going to box him, fight him and knock him out. I only accepted this fight so he will shut up calling my name. I’m going to batter him and he knows it. I’ve come on big time and he has done nothing since.

“He can’t stop traffic. He is gonna get a boxing lesson and fight my game. I can box, he can’t box. Jono is just a pressure fighter. He doesn’t even want to fight you. If I beat him I hope he retires like he said he would on social media.

“I have been knocking on the door and I’m happy to be part of Mick Conlan’s Homecoming. I don’t know much about Benson, but he hasn’t done much as professional. I’m asking for big fights, but have to fight bums like Benson on the way. He isn’t even a good name to have on my record.”

“I got laughed at by my German teacher when I said I would be a professional boxer. I hope she is tuning in on Saturday. I am a better boxer than Johnny and everyone will see that. This is sink or swim. I am going to ping him.”

“Joe hasn’t had the balls to show up to the press conference and I hope he turns up on Saturday. I don’t know his game. He even blocked me on social media. It is a great fight against Ham and it’s the first real test for either of us.”