Officials Named for Ramirez vs Angulo 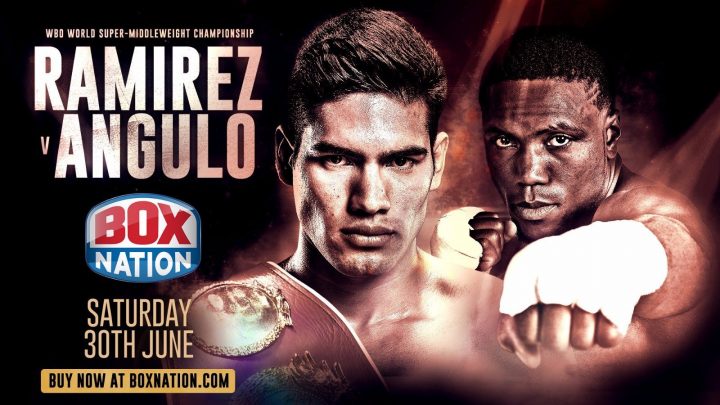 The bout will take place at the Chesapeake Energy Arena in Oklahoma City, as part of a boxing evening presented by Top Rank.

Gary Ritter of Oklahoma, will be the referee of the fight. Ritter, who has worked as a referee in professional boxing for 17 years, has been the third man in the ring for world title fights in Japan, Mexico and the United States.

Javier Álvarez, of Texas, David Sutherland, of Oklahoma and Levi Martínez, of New Mexico, were appointed judges for the bout.

The WBO supervisor will be Richard De Cuir, of Sacramento, California.

For Ramírez (37-0, 25 KOs), this will be his fourth defense of the title he won at the MGM Grand Garden Arena in Las Vegas on April 9, 2016. That night, he defeated German Arthur Abraham via unanimous decision.

Angulo (23-0, 20 KOs) became WBO Latino champion in Mexico with a second round TKO over local favorite Ronald Mansilla. The Colombian returned to Mexico for his second title defense in February, and knocked out Evert Bravo in the first round.

Ramírez-Angulo will be televised live on BoxNation, ESPN and ESPN Deportes at 9 p.m. ET.

The Sooner State will welcome home its favorite fighting son and one of boxing’s elite champions for a special edition of Top Rank on ESPN Saturday, June 30 at Chesapeake Energy Arena, home of the NBA’s Oklahoma City Thunder. Gilberto ‘Zurdo’ Ramirez will make the fourth defense of his World Boxing Organization (WBO) super middleweight title against the hard-hitting Roamer Alexis Angulo, while Oklahoma City’s Alex ‘El Cholo’ Saucedo continues his march to a 140-pound title shot against Lenny Zappavigna in a 10-round special attraction.

This world class doubleheader will be televised live on ESPN and ESPN Deportes at 9 p.m. ET.

Promoted by Top Rank, tickets to this world championship extravaganza will go on sale Friday, May 4 at 10 a.m. CST. Priced at $200, $100, $60, $40 and $25, not including facility and service fees, tickets may be purchased at the Chesapeake Energy Arena box office, online at Ticketmaster.com, all Ticketmaster outlets or by phone at 1-800-745-3000.

“We are looking forward to a great event in Oklahoma City. Zurdo Ramirez is always in great fights, and Angulo will give him a real battle,” said Hall of Fame promoter Bob Arum, founder and CEO of Top Rank. “It’s also with great pride that we were able to put in Oklahoma City native Alex Saucedo against a world class fighter like Lenny Zappavigna.”

“I want to prove that I’m the best fighter in the division. I’m willing to leave everything in the ring to defend my title,” Ramirez said. “I want to dedicate this fight to all the Mexicans and all the Latinos who reside in Oklahoma, I would like many of them to be present in the arena. That would motivate me even more. I’ll be waiting for you guys on June 30.”

“It’s a huge opportunity for me, and I am thankful to be fighting at home on ESPN. I’m going to train really hard, so I can put on a great show for my city,” Saucedo said. “It’s a dream come true to fight at the Chesapeake Energy Arena. I’m ready for the moment. I know what kind of style I bring. I’m going to put on an incredible show and get Lenny out of there.”

Ramirez (37-0, 25 KOs), from Mazatlán, Mexico, became the first Mexican-born super middleweight champion when he shut out three-time world champion Arthur Abraham on April 9, 2016. He was sidelined with a hand injury and didn’t make his first defense for more than a year but didn’t miss a beat in winning a shutout unanimous decision over Max Bursak. Ramirez closed out 2017 with a nip-and-tuck battle against No. 1 contender Jesse ‘Hollywood’ Hart, ultimately prevailing by unanimous decision. In his last bout, on Feb. 3 in Corpus Christi, Texas, Ramirez scored the first stoppage of his championship reign with a sixth-round TKO over Habib Ahmed.

Angulo (23-0, 20 KOs), from Bogota, Colombia, has won his last five bouts by knockout, most recently winning the WBO Latino belt with a first-round knockout over Evert Bravo. He has a well-worn passport, having gone on the road to win bouts in Turkey, Mexico, Germany, United States, and Dominican Republic.

Saucedo (27-0, 17 KOs) was born in Meoqui, Mexico, but his family moved to Oklahoma City when he was 7 years old. An accomplished amateur who won more than 150 bouts in the unpaid ranks, Saucedo turned pro in 2011 and served as a sparring partner for Manny Pacquiao. Saucedo, ranked No. 3 by the WBO at 140 pounds, last fought March 10 in Carson, Calif., against Abner Lopez, knocking Lopez out in the seventh round with a left hook to the body. Against Zappavigna, Saucedo will be fighting in Oklahoma City for the first time since 2014. Saucedo is also fighting for his place in Oklahoma City boxing history. He is seeking to become only the second Oklahoma City product to win a world title. Sean O’Grady captured the World Boxing Association (WBA) lightweight title on April 12, 1981 with a unanimous decision over Hilmer Kenty in Atlantic City, N.J.

Zappavigna (37-3, 27 KOs) is a 12-year pro and a longtime contender at both 135 and 140 pounds. He challenged Miguel Vazquez for the International Boxing Federation (IBF) lightweight title on March 12, 2011 in Las Vegas, dropping a unanimous decision. Following a knockout loss to Amneth Diaz later that year, Zappavigna moved up in weight, winning 10 consecutive bouts before engaging in a bloody slugfest against then-unbeaten Sergey Lipinets on Dec. 10, 2016. Lipinets prevailed via eighth-round TKO and would go on to win the IBF junior welterweight title two bouts later. Zappavigna has won two straight fights since the Lipinets defeat.