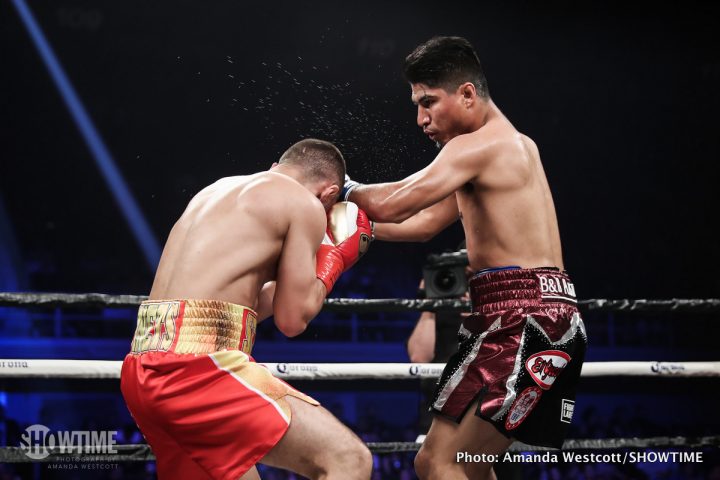 The main event of the SHOWTIME CHAMPIONSHIP BOXING® telecast (10 p.m. ET/7 p.m. PT) will see Garcia look to become a unified champion for the first time in a career that has seen him win titles in four weight classes. Easter, who enters with a 5-inch height and 8-inch reach advantage, looks to stamp his name amongst boxing’s elite by unifying titles at 27 years old, less than two years after capturing his first belt.

Tickets for the live event, which is promoted by Ringstar Sports and TGB Promotions, begin at $50, plus applicable fees, and are on sale today at 12 p.m. PT. To purchase tickets, visit AXS.com.

“SHOWTIME Sports continues to lead the industry with the biggest events, the most important matchups, week after week, month after month,” said Stephen Espinoza, President Sports & Events Programming, Showtime Network Inc. “Mikey Garcia vs. Robert Easter Jr. is the third world championship unification match on SHOWTIME this year. A consensus top-10 pound-for-pound champion facing an undefeated young champion while both are in the prime of their careers. July 28 has all the makings of an instant classic.”

“Mikey Garcia vs. Robert Easter is an outstanding lightweight matchup that is sure to deliver drama for fight fans at STAPLES Center and on SHOWTIME,” Said Tom Brown, President of TGB Promotions. “Garcia will look to unify in his hometown and further solidify his credentials as boxing’s pound-for-pound best. He’ll have perhaps the toughest test of his career in the unbeaten Easter, who has a lethal combination of size, speed and power that he brings to the ring. With both fighters defending their titles and undefeated records, this is shaping up to be a can’t-miss night of boxing in downtown Los Angeles.”

“This is the kind of matchup that boxing fans love and a fight that I believe will certainly live up to expectations,” said Richard Schaefer, Chairman & CEO of Ringstar Sports. “With two undefeated world champions, and two of the top guys at 135 pounds, this fight is guaranteed drama. Mikey Garcia will look to become a unified world champion and add another accolade to a career that is already shaping up to be historic. Robert Easter Jr, a proud champion in his own right, is coming to STAPLES Center on July 28 to upset Mikey Garcia in his hometown. This is the quality of matchup that fans watching on SHOWTIME have come to expect and I suspect they will be fulfilled once again when these two warriors meet in the ring.”

One of Southern California’s most popular fighters, Garcia returns to STAPLES Center for his first fight since becoming a world champion, and his first in California in seven years. Easter returns to the site of his professional debut, having started his career at STAPLES Center in 2012 after serving as an alternate in the London Olympic Games.

Garcia (38-0, 30 KOs), of Moreno Valley by way of Oxnard, Calif., became only the third fighter in modern history to become champion at 126, 130, 135 and 140-pounds, joining future Hall of Famers Juan Manuel Marquez and Manny Pacquiao, when he defeated Sergey Lipinets for the IBF 140-pound title in March. The 30-year-old relinquished that title so that he can unify the WBC Lightweight World Championship that he won in January 2017 with a highlight reel knockout of Dejan Zlaticanin (Click HERE to watch Garcia-Zlaticanin KO video)

These wins, combined with a summer 2017 victory over Adrien Broner, have seen Garcia return to the top of pound-for-pound lists after a layoff of two and a half years. Garcia accrued wins over a list of notable names while winning his first two titles at 126 and 130-pounds, including Orlando Salido, Roman Martinez and Juan Manuel Lopez.

“This is the toughest fight of my career to date,” said the four-division champion Garcia. “Robert Easter Jr. is an undefeated world champion who presents serious challenges that I’m going to have to work hard to overcome. Unifying titles is something I’ve dreamed of doing for many years, and to do it at STAPLES Center in Los Angeles will make it even more special. This is the kind of fight that will help my legacy. To be the best you have to beat the best, and Easter is certainly one of the best out there. I’m very thankful to have this opportunity and I’m going to make the most of it on July 28.”

Representing his hometown of Toledo, Ohio, Easter (21-0, 14 KOs) has made three successful defenses since winning his world title in an exciting contest over Richard Commey in 2016. The 27-year-old delivered a fifth-round destruction of former champion Argenis Mendez to earn the title shot, and since winning the title has held off challenges from Javier Fortuna, Denis Shafikov and Luis Cruz to retain his 135-pound belt.

Easter will be making the move to work with Kevin Cunningham for the first time for this fight and conducting training camp in West Palm Beach with him. Cunningham, the longtime trainer of former world champions such as Devon Alexander and Cory Spinks, spurred Adrien Broner to a strong performance in a draw against Jessie Vargas and Gervonta Davis to a dominant knockout of Jesus Cuellar in their first fights together in April.

“This is a fight I’ve been waiting for and I’m really excited that the time is now,” said Easter. “This is the best fighting the best. These are the fights that boxing is all about. I made the move to train with Kevin Cunningham down in Florida and I think it’s going to help me reach another level. It’s just eat, sleep and train down there. We’re going to be ready on July 28 to put on a show and deliver fireworks.”