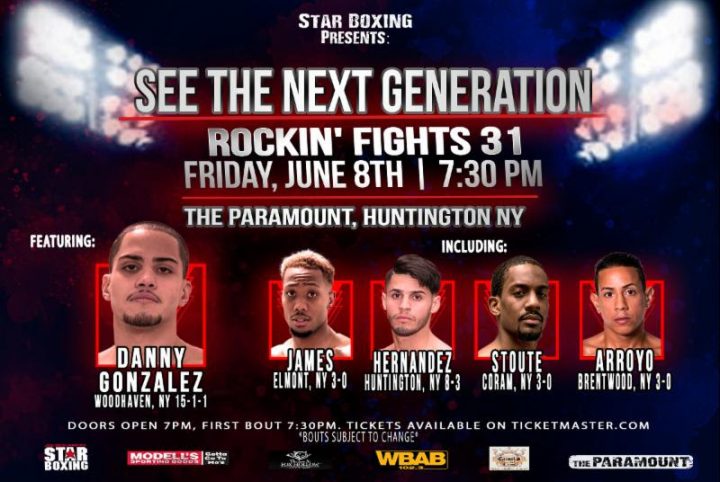 JOHNNY “THE HITMAN” HERNANDEZ (8-3 1KO) makes his homecoming on June 8th at The Paramount in Star Boxing’s “Rockin’ Fights” against JUAN de la CRUZ RODRIGUEZ (8-8-1 7KO’S) of Haymarket, Virginia. Hernandez is coming off of a tough majority decision loss to Anthony Laureano at Star Boxing “SLUGFEST at the SUN” in November, and is looking to get back in the win column on June 8th.

In his fight against Laureano, “The Hitman” put on a pace and pressure that kept the crowd on their feet round after round. Fans in attendance witnessed Hernandez’s determination and ability to provide non-stop action throughout the entire six round contest. Although he would not come out on top, Hernandez kept it extremely close, losing by a majority decision.

“The Hitman” has earned the name, based on his fighting style, as he is unafraid to exchange with anyone in the center of the ring. Hernandez utilizes a smart fighting style, picking his spots to unleash his hands.

Across from Hernandez will be veteran JUAN de la Cruz RODRIGUEZ, who returns to the Paramount looking for vengeance. Rodriguez is no stranger to getting fans off their seats. In September of 2017, the Virginia native went against a tough and upcoming, Maynard Allison (then, 9-1). Rodriguez was relentless with his pressure and continuously poured it on Allison throughout the match. Finally, the fight had to be stopped in the second round, giving Rodriguez the TKO victory.

Rodriguez is coming off a TKO loss to Danny Gonzalez at Star Boxing’s “Rockin’ Fights” in March. Rodriguez and Gonzalez were pitted in a grudge match, until a flurry of punches landed on Rodriguez caused the referee to call a stop to the action.

Both fighters have their eyes set on getting back into the win column in this scheduled six-round bout.

TYRONE JAMES highlights a sensational undercard attempting to become the next undefeated star to come out of The Paramount, alongside the likes of CHRIS ALGIERI, JOE SMITH JR., and CLETUS SELDIN.

JOHNNY HERNANDEZ is a Long Island warrior, having fought seven-times at The Paramount. He brings the crowd to their feet in every bout and will look to continue rising the ranks come June 8th.

MICHAEL STOUTE will be in a battle of the undefeated against ANDREW STROUDE (4-0 1KO) of Colorado. Only one man will leave The Paramount unblemished, but both are guaranteed to leave everything in the ring.

JOHN ARROYO returns the Paramount on June 8th for the second time, looking for his fourth professional win. The crowd roared during his last fight in March, and his Brentwood faithful will be out in full force once again for another great “Rockin Fights.”

GET YOUR TICKETS TO ROCKIN’ FIGHTS 31 TODAY!
FIGHT: FRIDAY, JUNE 8TH, 2018
$50, $60, $100, $150, $200
BUY TICKETS HERE!
FACTS:
Featured in the main event is Queens native, DANNY “EL GALLO” GONZALEZ who is in search of his eighth consecutive win at The Paramount. See the next generation of New York rising stars such as TYRONE JAMES, MICHAEL STOUTE, JOHNNY HERNANDEZ and JOHN ARROYO.