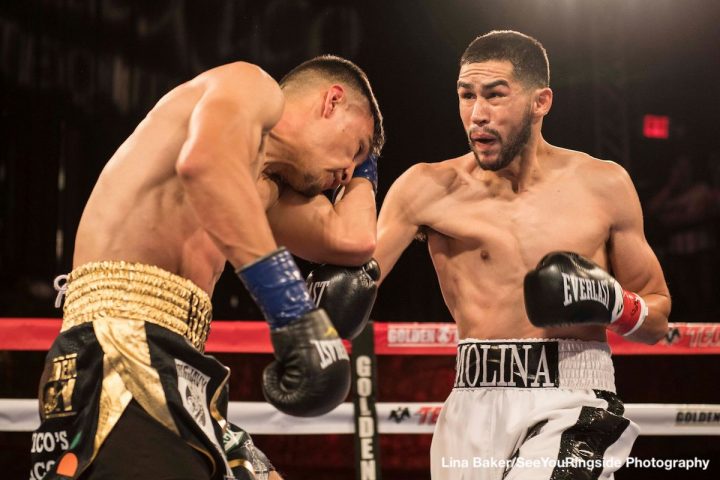 Javier “El Intocable” Molina (18-2, 8 KOs) scored a unanimous decision victory against Jessie Roman (22-4, 11 KOs) in the eight-round main event of the June 1 edition of LA FIGHT CLUB in front of a sold-out crowd at the Belasco Theater in Los Angeles, Calif. and televised nationally on EstrellaTV’s Boxeo Estelar.

“I felt I fought really well,” said Javier Molina. “I got some ring rust off against a good opponent. I was off for two and a half years, so I’m happy to finally be back in the ring. This was something I needed. It’s my first fight at 140 pounds and I felt the difference. I need to talk to my team now and see what’s next, but I want to stay busy.”

“We came to fight, and tonight he was the better man,” said Jessie Roman. “We are going to continue working hard for another opportunity and hope to come back soon. Congratulations to Javier Molina.”

“There are a few things I could have done better in this fight,” said Rafael Gramajo. “We need to go back to the gym to work on some things. I’m happy I got the victory tonight, but I have to throw more punches in the ring. I’ll be back as soon as possible.”

Joshua “The Professor” Franco (14-1, 7 KOs) of San Antonio, Texas opened the EstrellaTV broadcast by defeating Mexican warrior Isao Carranza (15-12-1, 9 KOs) via technical knockout in the fifth of a scheduled six-round bantamweight fight. Franco dismantled Carranza little by little with his excellent combination of aggression and technique, forcing Carranza’s corner to stop the fight at 1:36 of the fifth round.

“This victory means everything after my last setback,” said Joshua Franco. “I came better prepared than ever before, and my loss showed me that I have to keep coming back stronger and stronger. I want the rematch [with Lucas Leone].”

“The fight went as planned,” said Joey Alday Jr. “I knew that he was a UFC fighter, so that meant I had to be very busy. I also knew he’d have a good chin because of his record. The win felt great, and I’ll have to talk to my team about what’s next.”

Molina vs. Roman was an eight-round super lightweight fight presented by Golden Boy Promotions. The event was sponsored by Tecate, “THE OFFICIAL BEER OF BOXING” and Casa Mexico Tequila. Mark your calendars and buy your tickets for the upcoming shows on July 6, Aug. 10, and Oct. 12.

Tickets for LA FIGHT CLUB start at the fan-friendly price of $25 and are available for purchase now at www.goldenboytickets.com and the Golden Boy Promotions Facebook page.