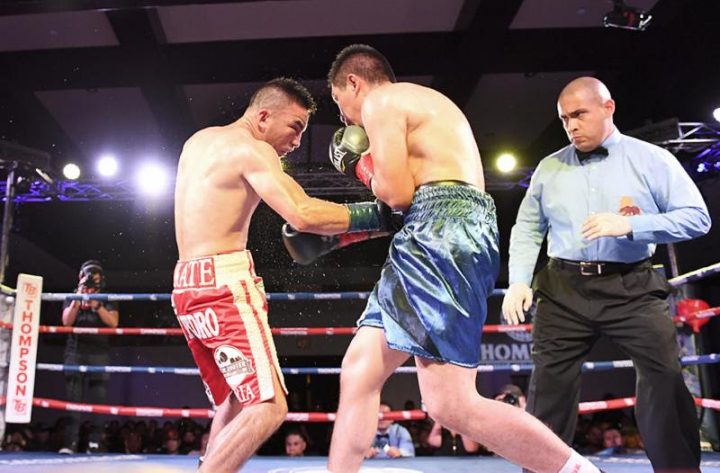 Zarate, fighting out of San Pedro, Calif., adjusted his game plan as the fight went on showing patience in the opening rounds, and turning up the pace the rest of the way.

“I didn’t know a great deal about him going in so I needed to know what he could do before I started my attack,” Zarate said. “He was hard to hit at first, but I found the angles once I got comfortable.”

Going in, Zarate understood the difficulty in facing a tough boxer like Robles, who had previously seen action against world champion Danny Roman. Robles made things interesting by sustaining punches and going on the counter attack. His work rate, however, did not match that of Zarate’s, which was his ultimate unraveling.

The fight featured excellent action with very little holding with both boxers landing strikes inside the pocket. Mendez, using his trademark pressure, preferred to load up with power punches to the head and body, while Espinoza was more active with a jab and countered well.

Espinoza, sensing he had to turn the tide, switched back and forth between orthodox and southpaw in the middle rounds in an effort to confuse the stronger Mendez. Mendez, however, didn’t bite on the tactic and stayed disciplined with his game plan.

Top bantamweight prospect Saul Sanchez (9-0, 5 KOs) of Pacoima, Calif. showed why he’s among the finest young boxers in the bantamweight division by dispatching Leonardo Torres (4-12, 1 KO) at the 2:24 mark of the third round.

Sanchez scored pay dirt at the end of the second round when a bevy of punches nearly sent Torres through the ropes. Torres would beat the count, but was badly wounded.

In the third, Sanchez consistently backed up Torres with a strong jab and excellent body work. He scored a knockdown midway through the round and promptly finished him toward the end with a series of heavy punches.

Brandon Valdes (11-0, 6 KOs), a talented super bantamweight from Colombia, showed a diverse skill set in his unanimous decision sweep of Mexico’s Jose Fabian Naranjo (3-9-2, 1 KO). Valdes’ hand speed was of the superior variety and his shifty defense made him close to impossible to hit.

Valdes also showed tactical patience in waiting for clear openings to materialize, while never really forcing the issue. Scores 40-36 all around.

Acosta owned a sizeable height advantage over Castillo and used it to control the fight. He knocked down Castillo in the first and never looked back. Acosta used an active jab to set up a body attack that had Castillo gassed by the fourth round. Scores: 40-35 twice, 39-36.

Featherweight prospect Anthony Chavez (6-0, 2 KOs) of San Bernardino, Calif. wasted no time in getting the action started. He pounced on the slow-footed Josafath Vazquez (5-4, 3 KOs) in the opening moments of the first round. A strong combination forced Vazquez onto the ropes where Chavez scored a knockdown.

Chavez then carefully stalked Vazquez and put him down for good with another batch of punches at the 1:45 mark of the first round. Chavez is managed by Henry Ramirez.

To watch the “New Blood” show with Beto Duran and Steve Kim on the call, please access these links: PART I and PART II.

“New Blood” was presented by Thompson Boxing Promotions and sponsored by Everlast.