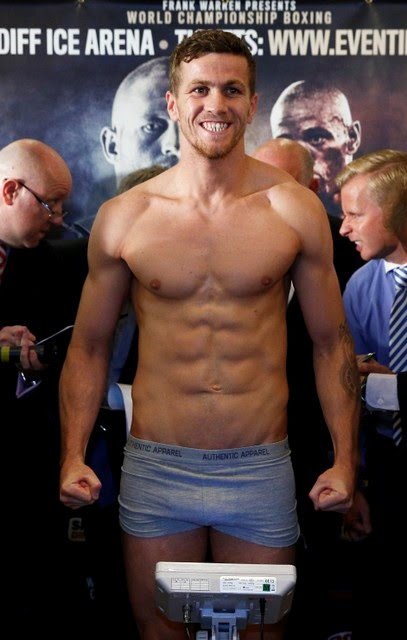 In a 19 fight paid career, the bull strong brawler from an Irish traveller’s site near Paddington has only conceded twice – when conceding natural weight to world class super-welter Liam Williams, and in a gallant WBO challenge to Jeff Horn when 12,000 miles from home. (Both stopped him whilst still vertical and retaliating in round 11).

‘Before the end of the year, I want to wrap up the British and then take whatever comes my way,’ states the appropriated named ‘Hellraiser’ who starts his 2018 campaign in an eight rounder on the bonanza Belfast bill this weekend.

‘For a chance to win the British welterweight title, I’d fight Brad Skeete, Johnny Garton and Frankie Gavin on the same night!

‘Brad and me has been on-off for years and, if it doesn’t happen this year, it’ll probably never happen. I’ve got far more about me than Skeete has. He’s just a pure boxer and he can’t run from me. I’m too strong. I’ll cut him down and bash him up. Gavin, the same. I love bullying those types.

‘Me and Johnny Garton for the vacant title is a fight the fans would love to see, two tough London boys. I’d not take him lightly but I’ve fought at a far higher level and I’d be giving him a beating. Like that Josh Kelly (the 2016 GB Olympian), he’s never beaten anyone of note.

‘And I’d have no qualms about fighting the Spanish kid (Kerman Lajarraga) who bashed up Skeete for the European title. He only chose Frankie Gavin next cos he knows it’s an easy defence.’

While Corcoran’s valour was commonly lauded during his December WBO title challenge on the other side of the globe, the Wembley-born warlord claims he underperformed!

‘I really want to impress this year because I’m a lot better than I showed against Horn,’ insists Gary, one of 12 offspring.

‘It was a big opportunity for me. I was in Australia for over a month and it was the hardest I ever trained. But I was badly cut in sparring 10 days before the fight and we just about managed to clean it up. I knew it would re-open and Horn landed a couple of head butts in the early rounds. He’s that kind of fighter.

‘After that it was so painful. I was well in the fight until half way but I couldn’t pick it up when I needed. The indoor arena was packed and, if I’m honest, I froze on the massive stage. Nothing went my way.

‘Horn was a good champion. Losing the title to Terence Crawford – the best in the world pound for pound, in my view – was no disgrace but I should’ve done a lot better. I couldn’t bring to the ring the things I was doing in the gym. But it’s all a learning curve.’

Dormant since, fearless Corcoran initially agreed to confront local dangerman Paddy Gallagher for his return on Saturday, only for the 2010 Commonwealth Games champion to bow out with a broken jaw.

‘I was really disappointed because I’d trained hard to give that boy a beating. I’d have snapped his jaw in the fight, but someone beat me to it,’ says Corcoran who is coached by Peter Stanley and Frank Greaves at The Peacock gym in Canning Town, east London.

‘He’d not fought anywhere near the level of opponent I have yet he’s lost four times, including to an old man (35 year old Yank Brad Solomon) in his last fight. And the cheeky **** says he’s going to knock me out? Laughable!

‘I’ve been trying to keep away from social media but I’ll still give him his chance down the line, if he’s got the balls to step in. That’d be quite an easy bashing, I’d give him.

‘But the missus’ family are from Belfast so it’s always nice to visit and fight here. When I fought there before in my comeback fight at The Waterfront (wrsf5 James Gorman, March 2017), the Irish were very good to me. Belfast fans always generate a great atmosphere.

‘I believe I’m now in an eight rounder (opponent TBA) and I intend to listen to orders and look good, show what I’ve been improving on in camp, sparring top class boys like Kell Brook, Sam Eggington David Avenesyan and Asinia Byfield.

‘I’m more sideways on now, everything off the jab, using angles. That said, the ‘Hellraiser’ will always be there – you can’t coach that – and if I have to charge forward like a train I will do.

‘But I want to wake up on Sunday morning with no pain to my eyes, my head or my hands. This time, I intend to win as clean as possible.’