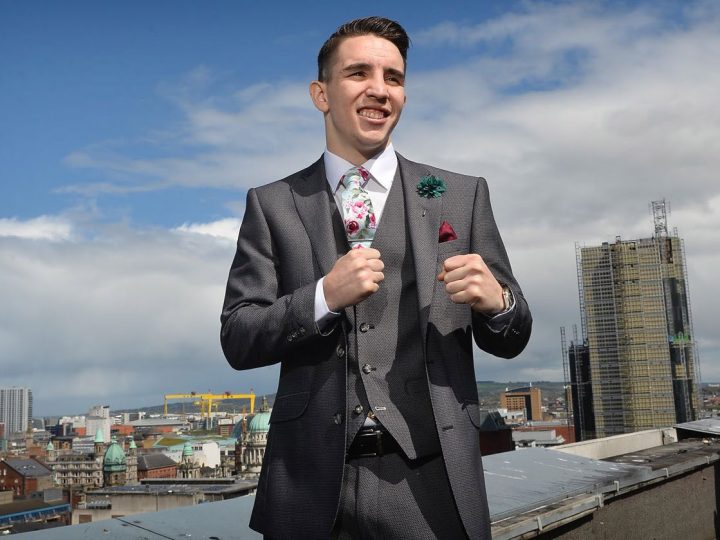 Two-weight world champion Carl Frampton believes Michael Conlan has what it takes to conquer the world and achieve global fame.

Frampton (25-1-KO14) has begun preparations for his dream fight at Windsor Park on August 18 but first the city of Belfast gears up to welcome home Conlan on June 30.

Former amateur world champion Conlan has wowed audiences Stateside since turning professional and ahead of his return to his and Frampton’s home city, ‘The Jackal’ is predicting a rosy future.

Frampton said: “Michael Conlan has what it takes to be a worldwide superstar. I can’t wait to see him fight on June 30 and the undercard is phenomenal too.

“People like Arum and Frank Warren really know what they’re doing. If Mick plays it right, he has potential to become not just a big name in Ireland but a big name globally.

“When you watch him you can tell he’s just a class act. He’a lovely boxer. He’s very highly skilled and there aren’t many fighters who can compete with him on how skilled he is.

“Mick’s also looking like he is starting to punch a bit harder and that’s something that will continue to develop as he gets older.

“Perhaps most importantly, he has the right mentality and if he plays it right, the sky is the limit for him.”

#TheConlanRevolution and #TheJackalsDen will both be broadcasted live on BT Sport.

Olympic champion Shakhobidin Zoirov is keen to get started on translating his amateur success to the professional ranks after signing with MTK Global.

The Uzbek was a standout name in a haul of elite signings that included his compatriot Hurshid Tojibaev and Kazakh stars Sultan Zaurbek and Azhbenov Nurtas.

Zoirov, who claimed the flyweight gold medal at Rio 2016, said: “I know boxing isn’t an easy sport but I always had the target of being professional. No matter how hard the road was, I was always going to make it.

“The goal is simple – I want to have a world title. I’m getting there as soon as possible. I’m not sure which weight division it’ll be in but I’ll decide that with my managers and coach.

“I will reach my goal step by step and do whatever it takes to be a world champion.

“I’m delighted to be working with MTK Global. I learned of them through my brother Hurshid Tojibaev. I’ve been watching their work and I like what they do.

“MTK Global is a relatively new company and are doing new things. I’m happy to be working them and together, we can create a new epoch.”