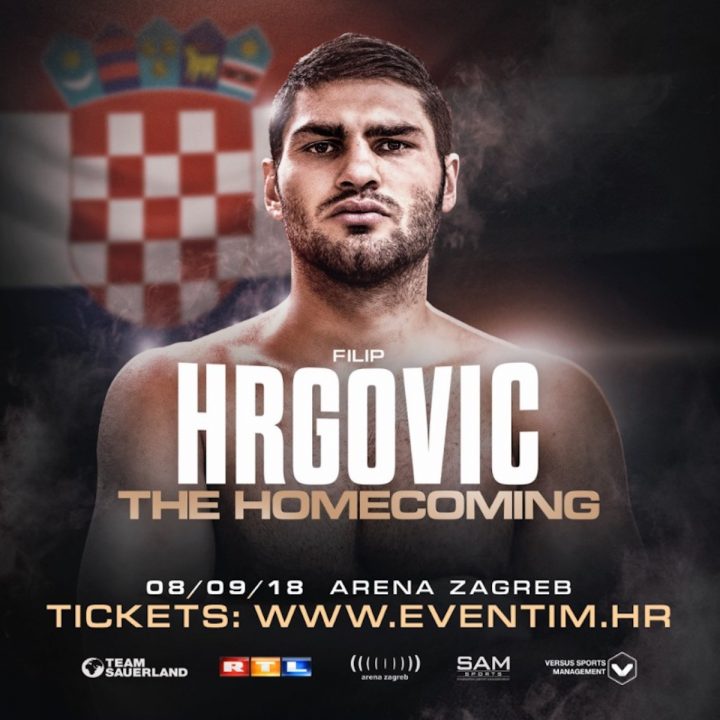 Filip Hrgović (5-0, 4 KOs) will box at home for the first time as a professional on September 8 as he headlines an action-packed fight night at the Arena Zagreb.

The Croatian boxing sensation has taken the heavyweight division by storm since joining the professional ranks on September 30, 2017. Starting in style, he needed just 90 seconds to dispatch Raphael Zumbano on his paid debut at the Riga Arena in Latvia.

Having fought all his previous contests away from home, the Rio 2016 Olympic Bronze Medallist says he is delighted to be fighting in Croatia, and has vowed to make his countrymen proud with his greatest performance yet.

“It will be a special moment when I walk out in front of my home fans at the Arena Zagreb,” says Hrgović. “It is a huge opportunity to box as the main event in your hometown. It will give me a lot of confidence and pride but also a lot of responsibility to place Zagreb on the world boxing map.

“Fighting at home is a game changer. You have to fight at 200% and offer even more to your local supporters than normal. On September 8, I will be in a different mindset from my previous fights. I will fight for the Croatian people!”

An opponent for Hrgović’s homecoming will be announced shortly with his promoter targeting a top 50 heavyweight and a title fight for the dynamite-fisted 26 year-old, who says he is ready and willing to face anyone.

“I am currently ranked 37 in the world after 5 fights,” he says. “This has never been achieved before by any heavyweight. So as you can see, I am on a fast track, and I will take any opponent. As I keep saying, if you want to be World Champion, you must be ready to fight the best.

As he awaits news of his opponent, Hrgović urges the Croatian public to join him on September 8 for what he promises to be ‘a great night of boxing’ in Zagreb.

“I want to assure all my supporters that they will experience a great night of boxing, with a very competitive fight on September 8,” says Hrgović. “I will not hide and I want to have the best possible opponent to showcase my talent. I also expect a great undercard featuring very talented Croatian boxers that will inspire future Croatian talents to join the sport of boxing. See you in Zagreb in Lijepa naša domovino!”

Zeljko Karajica, CEO of 7Sports, the sports unit of the ProSiebenSat.1 Group and Managing Director of the operating event agency MMP Event GmbH is sure of a great night: “We are very glad to be able to bring Filip’s fight home to Zagreb. The fans can certainly expect a captivating fight night with absolute world class boxing.”

Promoter Nisse Sauerland, of Team Sauerland, reveals he is close to confirming an opponent, and is promising a tough test for the Croatian star: “This will be another exciting step on Filip’s journey to the top. We’re in dialogue with a number of top heavyweights, and are very close to confirming an opponent. This fight will be a big step up for Filip, but with the support of his home crowd, I’m confident he will be up to the challenge.”

Antonio Vuksanović, Sports Editor of RTL, who will broadcast all the action from the Arena Zagreb live and exclusive in Croatia, adds: “We are very excited to broadcast Filip’s fight. Many years have passed since Croatia had a promising heavyweight boxer and we are delighted to exclusively follow Filip on his journey towards to top. Arena Zagreb will be only one step on that journey but a very important one because Filip has never fought on that big home crowd stage.”