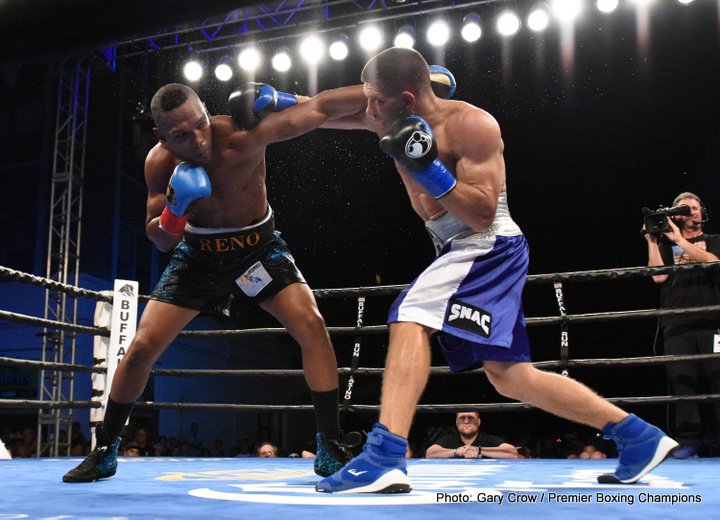 Derevyanchenko was one of Jacobs’ sparring partners to help him get ready for the Golovkin fight last year. Jacobs is respectful of Derevyanchenko’s talent. Whether he’ll want to fight him for the IBF title remains to be seen. Demetrius Andrade reportedly passed up on a fight against Derevyanchenko on two occasions, so it’s unlikely he’ll bother to take the fight if Jacobs doesn’t want the fight.

Jacobs, 31, previously held the WBA middleweight title from 2014 to 2017. Jacobs lost his WBA title to Golovkin last year in March by a 12 round unanimous decision. Jacobs was heavily criticized by boxing fans for skipping the IBF’s morning weigh-in on the day of the fight due to him wanting to rehydrate as much as possible. Golovkin took part in the weigh-in. Some boxing fans believe that Jacobs rehydrated to 190lbs. His weight wasn’t revealed by HBO on the night of the fight.

This is a doable fight given that Derevyanchenko and Jacobs are both managed by Al Haymon and trained by Andre Rozier. However, Jacobs just beat Maciej Sulecki by a 12 round unanimous decision in a WBA middleweight title eliminator last April. Jacobs is also a potential backup option for Saul Canelo Alvarez to fight on September 15 if his management at Golden Boy Promotions is unable to swing a deal for a rematch against Golovkin. That’s the fight Golden Boy and Canelo wants, but negotiating the purse split would be difficult considering that Golovkin wants a 55-45 split.

The IBF stripped Golovkin of his middleweight title because he wouldn’t commit in writing to defending against the 32-year-old Derevyanchenko by the IBF mandated August 3rd date that they have decided on after they allowed GGG to face replacement opponent Vanes Martirosyan on May 5. Golovkin used Martirosyan was he replacement after Canelo dropped out of the fight on three weeks’ notice.

Canelo had tested positive clenbuterol and he wasn’t going to be allowed to take the fight anyway, so he pulled out of the fight. The IBF expected GGG to defend against Derevyanchenko on just 3 weeks’ notice, but his promoter Tom Loeffler felt that was too little time to get ready for that particular fight. That’s why he asked the IBF for an exception to allow GGG to make a voluntary defense against Martirosyan.

This is believed to be Jacobs’ final fight of his 3-fight contract with HBO. It’s possible Jacobs could choose to fight for his promoter Hearn on his DAZN platform in the U.S. Hearn is needy for American fighters to fight for him on DAZN, because he’s had terrible luck in signing U.S fighters.

Jacobs hasn’t looked good in his last couple of outings against Maciej Sulecki and Luis Ortiz. In terms of skills, Jacobs doesn’t appear to have lost anything from his game. It seems like mentally Jacobs has lost his courage since getting beaten by Golovkin. Jacobs hasn’t fought with the same bravado he once had since losing to GGG.