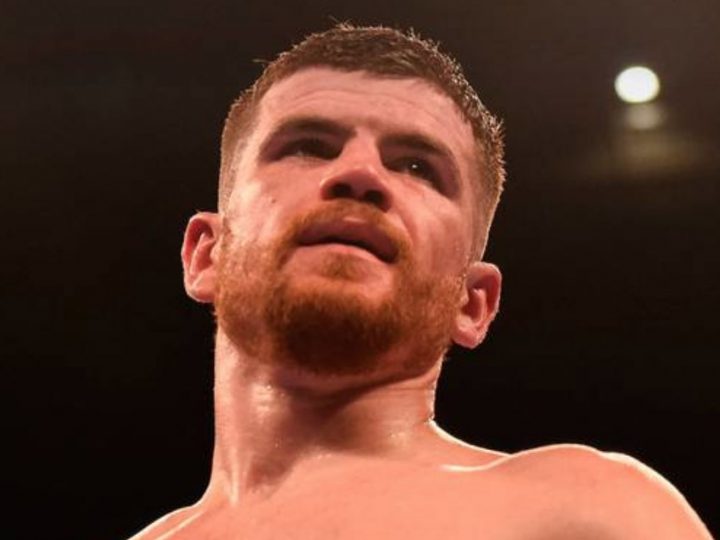 Paddy Gallagher has suffered a broken jaw and has been forced to withdraw from his fight against former world title challenger Gary Corcoran on June 30.

Belfast welterweight ‘Pat-Man’ suffered the injury in one of his final sparring sessions before the huge card at The SSE Arena and will delay his bout with ‘Hellraiser’ Corcoran as he sets about rehabilitation.

Gallagher said: “It goes without saying that I’m gutted with what’s happened.

“I guess I’ll have to buy a ticket off myself and go and support all the lads as a spectator! Seeing them all fight will soften the blow.

“It’s just one of those things that can happen in the sport of boxing, unfortunately. I’ll come back more determined, stronger and better than ever.

“Myself against Gary Corcoran remains a massive fight and I hope it will happen before the end of the year.

“It may end up that when it does happen, the fight has even more on the line than it would have done. We will make this fight happen.”

Connor Lee Jones is thinking big as he prepares to get busy as a professional boxer with a quickfire second bout next month.

Jones steps back in the ring less than a month after his pro debut with a hometown contest at Dudley’s the Venue on Saturday July 7, writes Craig Birch.

He features in a four-round contest, on a show which will take place under the BCB Promotions banner. It has been titled ‘the Usual Suspects.’

The 22-year-old lightweight was last in action on June 9, at Willenhall Baths, and impressed
with a whitewash points victory over former English title challenger
Liam Richards.

Brierley Hill’s Jones was back in the RG Boxfit gym two days later under the tutelage of trainers Richard Ghent and Robert Wright, both high-level fighters in their own careers.

It follows on from the grounding Jones received from Team GB coach Bob Dillon, as he came through the ranks at Dudley’s Lions Boxing Club.

He bagged ABA All-England honours in 2013 and was a part of the GB junior squad, also boxing for England in the unpaid ranks.

Major prizes are now in his mind after belatedly getting his paid ledger up and running, which Jones is determined to improve on his home turf.

He said: “My debut should have been in December, we had afew problems getting my pro licence in time for the show and it didn’t happen.

“I’d just been training for a long time before that. In fact, before I got in there (against Richards), it was two years ago, in the England Elites, when I last had a proper fight.

“I felt sharper than ever, though, because of the coaching I’ve had. Richard and Robert have been there and done it, both amateur and pro, and are now showing me the way.

“I took my time against Richards, like I should do against someone that experienced (60th pro fight), and I was in control. He was awkward, but I’ve faced more skilled boxers than him.

“This show in Dudley is an easy one for me and my fans to get up for. It’s close to home and should be a great atmosphere.

“Since I first started at Lions, I’ve dreamed of what I wanted to accomplish. It was national titles and international recognition when I was there.

“Now it’s the Midlands, English, British and, to be honest, maybe even a world title one day. For now, it’s about ticking over and getting the bouts in.

“I was back in the gym on the Monday after my debut and, in the amateurs, I used to box Friday, Saturday and Sunday sometimes in competitions. I’m always ready to go.”

At the top of the bill, Wolverhampton-born duo Matt Sen and Josh Burke will collide in a Black Country battle for the eight-round British Challenge cruiserweight title.

Kingswinford’s Ball will be looking a record a sixth success from six outings, in the super welterweight division where older brother Jamie is a former Midlands champion.

Miller is back in action after a two year absence from light heavyweight activity. ‘The Jackal,’ 24, had impressed in points results over Iain Jackson and Mark Till.

Brummie Lovell, from Erdington, has built up a hat-trick of points wins over Kristian Laight, Richards and Dylan Draper as a super lightweight.

Pearce, from Rednal, will end over a year of frustration with his introduction to the pro boxing world at welter.

Wolverhampton’s Bavington is looking to bounce back after battling to a draw on her paid bow. The 25-year-old could not be parted from the experienced Borislava Goranova.

Tickets, priced at £35 or £50 ringside with waitress service, are still available by calling 07976 283 157. Alternatively, contact any of the boxers in the home corner on Facebook.