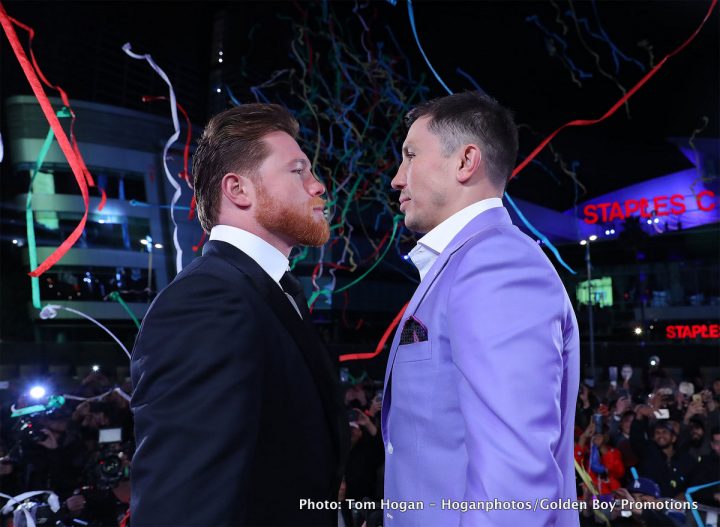 By Sean Jones: Trainer Abel Sanchez is sounding optimistic that the Saul Canelo Alvarez vs. Gennady Golovkin rematch will get done now that the promoters for the two fighters are back in negotiations. Golovkin (38-0-1, 34 KOs) has backed off his 50-50 purse split demand, and he’s now willing to take a 55-45 split. Sanchez feels that’s a good sign that GGG’s promoter Tom Loeffler is speaking with Golden Boy Promotions president Eric Gomez and CEO Oscar De La Hoya.

Golden Boy’s backup plan for Canelo to fight on September 15 is Daniel Jacobs, but it remains to be seen if that’s a fight that can get made. Golden Boy’s initial offer of a rumored 80-20 split to Jacobs has been rejected by his promoter Eddie Hearn of Matchroom USA Boxing.

”I think Triple G understands the fans want this fight,” Abel Sanchez said to K.O Artist Sports about Golovkin choosing to lower his 50-50 purse split demand for the Canelo fight. “He and Tom have asked to Oscar [De La Hoya] and Eric [Gomez] about a different scenario. It is being discussed, so hopefully it gets made. The fact that they’re talking about it, means that it’s not completely dead.”

Golovkin’s new offer of a 55-45 purse split still might not be low enough to get the Canelo fight made. Golovkin might need to drop down even further. De La Hoya is said to be willing to give Golovkin a 60-40 deal, which is an increase from the 65-35 split that Golden Boy wanted for GGG to accept for the May 5 rematch. A compromise between 55-45 and 60-40 could get the fight made.

Former Golden Boy promoter Richard Schaefer believes a 60-40 purse split would be a good split for the Canelo-GGG fight. However, Golovkin was asking for 50-50. If he’s asked to go all the way down to 60-40 from the 50-50 split that he wanted, he might not be willing to agree to that low of a split. You have to remember that Golovkin was given a low 70-30 split for the first fight last September.

Schaefer thinks it’s a bad idea for Canelo to fight someone else on September 15 instead of Triple G, as the boxing public wants to see that fight. They’re going to be badly disappointed if Canelo faces Daniel Jacobs instead of Golovskin, Schaefer says.

Schaefer is correct in stating that the boxing public will be upset if they don’t get the chance to see Golovkin and Canelo fight each other again. The fans didn’t get to see a winner from the previous fight between them on September 16 after the judges scored it a 12 round draw. It was a fight that appeared to have a clear winner in GGG, but the judges scored the fight a 12 round draw. If the rematch fails to happen on September 15, the fans, and the boxing media are going to suspect that Canelo and Golden Boy are trying to age the 36-year-old Golovkin so that he’s not as dangerous. Golovkin had to wait two years in the first place to get the fight against Canelo in 2017. Golovkin wanted to fight Canelo in 2015,

but he was told by De La Hoya that he wasn’t ready to fight him because he still needed to grow into the middleweight division.

Canelo vs. Jacobs won’t interest as many boxing fans, and there’s a very real risk for Golden Boy that it could go badly for their Mexican star. Jacobs is big, strong, fast and more than talented enough to win. Jacobs is coming off of a 12 round war against Maciej Sulecki last April. That was the perfect fight for Jacobs to get ready for the Canelo fight. If Jacobs fights Canelo the way he did Sulecki in the 12th round he could pull off an upset. I don’t even know if you can rightly call it an upset, because Jacobs has a ton of experience and he’s got the size and power on his side. Jacobs is a true super middleweight. He fights at middleweight, but he’s clearly a 168lb fighter. The 5’8” Canelo is a junior middleweight, who has grown too heavy to fight at 154. In terms of height, Canelo is too short to be fighting a super middleweight-sized Jacobs.

Junior middleweight Vanes Martirosyan says he thinks Canelo and Golovkin should agree to a 50-50 split of the money for their rematch. He thinks that if one of them is asking for more, then it suggests that they’re scared and looking to cash out.

“The money is already a lot. Just split in the middle,” Martirosyan said to VillianFy Media. “Why do you want to get more? Do you want to cash out? Are you afraid to lose or something about that? Are you trying to take as much as you can? I think it should be 50-50. Somebody is scared. Somebody is showing a little bit of fear. I think Canelo was just looking for an excuse not to make the fight,” Martirosyan said.

Canelo seems to have a stubborn streak that is causing him not to want to agree to a 50-50 split. Golovkin wants a better deal than last time because he accepted such a badly slanted deal for the first fight, and then he also feels that he should get more because he’s the IBF/IBO/WBA/WBC middleweight champion and Canelo just the challenger. Canelo’s two positive tests for clenbuterol also likely factors into the discussion for why GGG wants a better split than last time. Golovkin thinks Canelo tried to cheat for their May 5 rematch.

Martirosyan says he could be facing Julio Cesar Chavez Jr. on August 11. He says he doesn’t care what weight the fight takes place at. He just wants to fight him.

Martirosyan could make good money if he gets the Chavez Jr. fight. Facing Golovkin last May made Martirosyan a bigger name, even though he was knocked out in the 2nd round. Martirosyan received a lot of publicity as GGG’s opponent. If he can get a fight against Chavez, it’ll be a win-win fight for him.