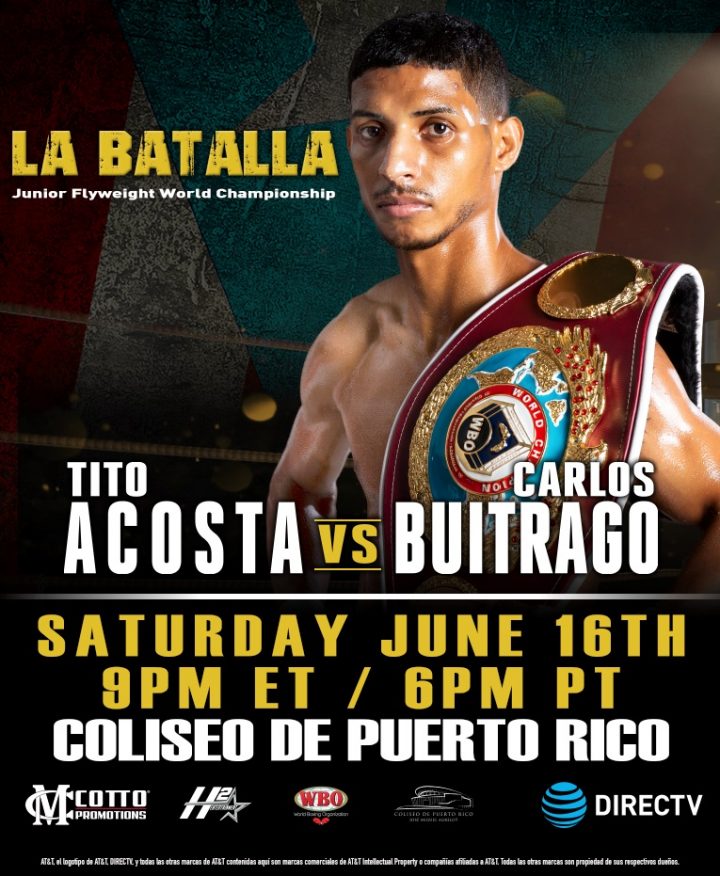 Future Hall of Fame boxer Miguel Cotto believes that, for him, promoting is even more challenging than fighting.

The living legend retired last December with an incredible 41-6 (33 KOs) pro record, in which he became the only Puerto Rican to capture world titles in four different weights classes, light welterweight through middleweight.

“We have been in the promoting business for more than 13 years, combining both roles (fighter and promoter),” Cotto said. “Now, we are able to give more attention to our fighters in terms of training.

“Promoting is more complex because there are challenges regarding every facet of an event. As a fighter, you concentrate solely on the fight, not all the details involved in promoting a successful event.”

Integrated Sports Media will distribute the La Batalla: Acosta vs. Buitrago card in the United States on cable, satellite and digital pay-per-view via iN Demand, Vubiquity, DIRECTV, DISH and live-streamed worldwide (excluding Puerto Rico) on the FITE.TV app and website (www.fite.tv), starting at 9 p.m. ET / 6 p.m. PT, for a suggested retail price of only $34.95.

“This pay-per-view card is a very important opportunity for is to showcase a great event,” Cotto added, “as well as a perfect scenario for Acosta to show the world who he is as world champion.

“It is a pleasure for me to give back to boxing what boxing gave me. Seeing our brand grow and fighter development let us know that we are doing things the right way. Our goal is to continue developing the best talent in Puerto Rico and building their brands and legacies.”

The 27-year-old Acosta is on a mission to become a Puerto Rican boxing icon like Cotto, Tito Trinidad, Wilfredo Gomez, Hector Camacho, Wilfredo Benitez and so many other greats from this fertile island.

Acosta’s success brings back fond memories for Cotto to when he was in a similar situation as a young world champion. “He does bring back memories for me and he proves that hard work pays off,” Cotto concluded. “Tito is living the dream every boxer has when they choose to box as a living. Now is the most challenging chapter for him to expand his reign and build his legacy.”

Additional June 16th PPV fights will soon be announced. All fights and fighters are subject to change.