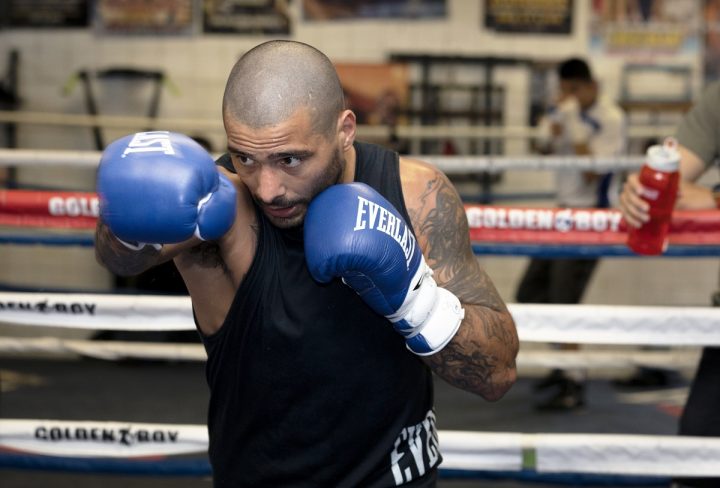 Argentine knockout artist Lucas “La Maquina” Matthysse (39-4, 36 KOs) discussed his training camp routine ahead of his super fight against future Hall of Famer Manny “Pacman” Pacquiao (59-7-2, 38 KOs) in a scheduled 12-round welterweight clash. The fight, which will be for Matthysse’s WBA Welterweight World Title, will take place Sunday, July 15 at Axiata Arena in Kuala Lumpur, Malaysia.

The 35-year-old champion is now entering the first stages of sparring at the Boys and Girls Club in Indio, California, with head trainers Joel and Antonio Diaz. This team of brothers oversee a training camp that includes other fighters from the exclusive Golden Boy Promotions stable, including Francisco “El Bandido” Vargas, Diego De La Hoya, Marcelino “Nino” Lopez, Vergil Ortiz Jr., Christian “Chimpa” Gonzalez and Oscar Duarte. Mario Narvaez, who is the brother of former two-division world champion Omar “El Huracan” Narvaez, also forms an important part of the Matthysse team, while Federico Wittenkamp is in charge of his strength and conditioning training. For the native of Trelew, Chubut, Argentina, this is not an ordinary training camp as his career will be defined by the result of this highly anticipated fight.

Strength and conditioning with Federico Wittenkamp at 8:00 a.m.
Training in the gym at 3:30 p.m.
Sparring sessions on Mondays, Wednesdays and Fridays
Mitts, strategy and boxing routine on Tuesdays, Thursdays and Saturdays

Matthysse had the following to say regarding his break from boxing, his training camp, and his fight against Pacquiao:

“I have been training in the United States for about a month already after having trained for two months in Argentina. I still have about a month and a half left, and I’m preparing very well. We’re focused very much on this fight, and people will see the same Lucas Matthysse as always, the one who always looks for the action. It’s a fight that I like because of our similar styles and because we are of the same height.

“After my last loss against Viktor Postol, I decided to take a break of about nine months where I would do nothing but enjoy my time with my family. I would fish, ride my motorcycle, be at home or spend time with my friends. I needed the time to forget about boxing and recharge my batteries so I could start again fresh with my training.

“I’ve been a professional for several years. I’ve fought with good fighters, and I got a lot of experience in Argentina and the United States. Training with Joel Diaz now is something that’s really good for me. After having lost to Postol, I wanted to return, but I didn’t know where and how. I had known Joel Diaz for some time already, so I decided to start my career again with him in the United States.

Pacquiao vs. Matthysse is a 12-round fight for the WBA Welterweight World Championship presented by Manny Pacquiao Promotions in association with Golden Boy Promotions and Arano Box. The fight will take place Sunday, July 15, 2018 at Axiata Arena in Kuala Lumpur, Malaysia. The event will air live in the United States on Saturday, July 14, 2018. Tickets for this event will be announced shortly.