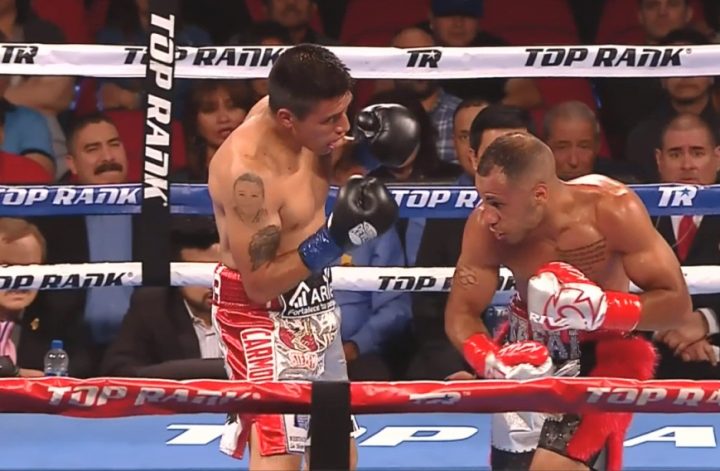 By Scott Gilfoid: In a fight filled with fouls, WBA super flyweight champion Khalid Yafai (24-0, 15 KOs) kept his unbeaten record intact in defeating fringe contender David Carmona (21-6-5, 9 KOs) by a 7th round knockout on Saturday night at the Save Mart Center in Fresno, California.

Yafai dropped Carmona four times in the fight. After the 7th, Carmona, 27, chose not to answer the bell for round 8.

Carmona came in three pounds over the weigh-in limit at 118 lbs. at the weigh-in on Friday, and it’s unclear whether he trained hard for this bout or not, as he’s not someone that typically comes in overweight. Carmona had lost 3 out of his last 4 fights going into this fight, which makes you wonder what was the overall objective in Yafai’s promoter Eddie Hearn picking him out?

In round 1, the 28-year-old Yafair knocked Carmona down with a big left hook shot to the head. Carmona got back up and moments later rocked Yafai and sent him down on the canvas. The referee ruled it a slip, but it looked like a clean shot. Yafai was badly hurt by Carmona. The round went to Yafai, but it was Carmona did the most damage in hurting Yafai.

In round 2, Yafai regained his composure and stayed in the center of the round, jabbing Carmona and controlling the action. Carmona landed some nice body shots in the round. It was a close round, but Yafai did the better work with his jab.

Yafai started picking Carmona apart with jabs in the 3rd round, landing constantly with head-snapping shots. Carmona worked the body of Yafai whenever he got get close to him. It was a close round.
In the 4th round, Yafai landed a clear low blow that knocked Carmona down. The referee Raul Caiz Sr., who was having a bad day, ruled it as a knockdown instead of a low blow.

Thankfully, the referee’s blown call didn’t impact the fight, as it would have been a shame if changed the outcome of the contest. After Carmona got back up, Yafai went after his body, hitting him with additional body shots in hoping to duplicate the knockdown. What Yafai didn’t realize is his knockdown came from a low blow.

Carmona wasn’t going to go down again from legal shots to the midsection. In response, Carmona fired back his own body shots. But Carmona took the high road in choosing not to fire back his own blow to even the score. Anyway, it was sad round to see the referee blowing a call and not giving Yafai a warning for his low blow. In slow motion replay, Yafai landed a clear low blow right to the groin. How the referee could miss it is unclear because he was standing right there and should have seen it.

In rounds 6 and 7, Yafai hit the tired looking Carmona at will with shots, and it was no longer the competitive that we’d seen in the first four rounds. Carmona looked like he hadn’t trained at all, and he had nothing left.

It was an ugly fight by Yafai, who looked huge for the weight class after rehydrating. Yafai looked like a light welterweight tonight. The size advantage really helped Yafai. What also helped Yafai was the low blows. He was landing a lot of shots south of the border and getting away with it.
All in all, it was not a great performance from Yafai. Although Yafai got the victory, he was fouling like mad and he looked very hittable.

The way that Yafai fought, I don’t see how he’s going to be able to beat IBF super flyweight champion Jerwin Ancajas. That’s the fight that Ancajas’ promoter Bob Arum of Top Rank wants later this year. Eddie Hearn is likely pleased with Yafai stopping Carmona, as he was able to go the distance with Carlos Cuadras and Naoya Inoue. Hearn might see Yafai’s stoppage win over Carmona and assume that it means he could beat Inoue. That’s the stuff of dreams. The reality is Carmona seems to have lost his desire for boxing after losing 3 out of his last 4 fights going into tonight’s fight. In other words, the Carmona that fought Inoue isn’t the same one that fought Yafai tonight. I think Carmona has lost interest in the sport after losing those fights. It was a bad idea for his management to put him in consecutive fights against tough opponents after his loss to Inoue. I think it destroyed his self-confidence. I can’ see Yafai beating Ancajas. That’s a different type of a fighter. Ancajas can punch, unlike Carmona, who had no power to speak of. Ancajas’ confidence is sky-high right now. He’s not going to be going into the fight with Yafai with 3 losses in his last 4 fights like Carmona did tonight.