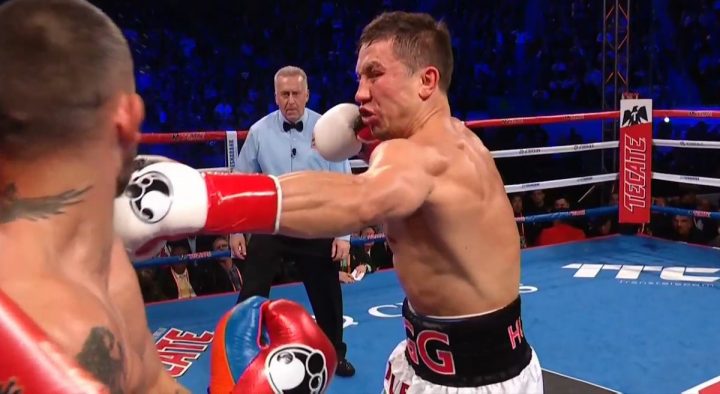 By Dan Ambrose: Max Kellerman of HBO dissected middleweight champion Gennady Golovkin (38-0-1, 34 KOs) following his 2nd round knockout win over Vanes Martirosyan (36-4-1, 21 KOs) last Saturday night, and he came to the conclusion that he fights much differently against weaker opposition than he does when he fights the more talented guys like Daniel Jacobs and Saul Canelo Alvarez.

Golovkin was very aggressive with his fighting style against the 32-year-old Martirosyan in comparison to Canelo and Jacobs, who he chose to box for 12 rounds instead of using his power advantage to try and knock them both out. Kellerman didn’t come right out and say it, but he hinted strongly that Golovkin is a bully, who fights aggressively against weaker foes like Martirosyan compared to when he fights guys that have more talent and/or more punching power like Canelo, Jacobs and David Lemieux. Golovkin boxed all three of those fighters instead of slugging with them.

“It may be a risk to wait too long on the sideline,” Kellerman said about the Canelo vs. Golovkin 2 fight. “How many fights does a guy at the age of 36 that fight 2 or 3 times per year. This is where you make your money if you’re Triple G. He’s fought his entire career to get to this point. Martirosyan was the biggest name that represented the least amount of risk that he could find. So you get a result like this,” Kellerman said.

Kellerman failed to mention to the viewing audience the reason why Golovkin ended up fighting Martirosyan. Golovkin was supposed to fight HBO star Saul Canelo Alvarez, but he tested positive twice for the banned PED clenbuterol, and he ended up being suspended for six months. With 3 weeks to go before the fight, Golovkin’s management had to find an opponent to replace Canelo for the May 5 date. It was either that or give up the date on HBO, and Golovkin didn’t want to do that. Golovkin could have fought southpaw Demerius Andrade or his IBF mandatory Sergiy Derevyanchenko, but those are not fighters that you face on 3 weeks’ notice.

”I think about Canelo and I think about the rematch,” Kellerman said. ”You’ve got to figure there’s so much money that it’s going to happen. I think about Triple G and his camp. We’re talking about Mexican style. Chavez-Rosario was a fight they brought up. The great Julio Cesar Chavez Sr. of course, and that’s the way they wanted to fight. But against Danny Jacobs, Gennady, who is a very good technically aggressive fighter, played it a little safer than we normally see him play and fight, and that’s because Danny Jacobs is a dangerous fighter, a world class fighter, and a good boxer in his prime and it’s the same thing with Canelo. When had Canelo on the ropes, he didn’t go for broke, he didn’t go in there the way Chavez did against Rosario and stay in there. He kept at arm’s distance, because you got to be careful with guys like Daniel Jacobs and obviously Canelo Alvarez. They can box, they can punch, and they’re elite for a reason,” Kellerman said.

If Golovkin has a chance to face Canelo and Jacobs again, he’s going to fight them a lot differently. Golovkin learned a lesson against both of those guys. You can’t box Canelo and Jacobs for 12 rounds and assume the judges are going to give you the victory. Golovkin fought Jacobs in his hometown of New York City, and it was a mistake to not go for broke looking to score the knockout. Golovkin was lucky to get the decision, because the judges gave Jacobs almost every round in the second half of the fight.

Jacobs won 5 of the last 6 rounds on the judges’ scorecards. Golovkin was counting on the judges doing a good job of scoring the fights, and he barely won based on the work he did in the first half. If Golovkin fights Jacobs again in the future, he’s going to for a knockout early in the fight so that the judges don’t have a say so in the outcome.

A rematch between Golovkin and Jacobs will likely take place in New York again, because that’s where the fight has the best chance of bringing in a lot of fans. Golovkin knows that he can’t box Canelo, because he saw how the judges scored their fight last September. Golovkin isn’t going to take that chance of being on the receiving end of some odd scores by the judges against the highly popular Canelo. The rematch between Golovkin and Canelo will be in a venue that almost surely favors the Mexican star. That means the fight will either take place in Las Vegas or in Texas.

Golovkin could reject Nevada if he wants, but he might not get the fight if he does that. Golden Boy has Golovkin where they want him due to his age. They already made Golovkin wait 2 years until he was 35 for him to get the first fight with Canelo, and now another year will have gone by before he can potentially get a rematch. The time is currently on Canelo’s side right now with Golovkin. If Golovkin doesn’t agree to their terms, they can freeze him out until he’s so old that he won’t be able to beat Canelo any longer. I think Golden Boy will still let Canelo fight Golovkin even if he refuses to fight in Nevada again. Canelo doesn’t have a lot of options. Golden Boy has David Lemieux and Gary ‘Spike’ O’Sullivan on the sidelines waiting for a fight against Canelo. But after Canelo faces those two, he’ll be expected to fight the better fighters in the division like Jermall Charlo, Sergey Derevyanchenko and Jacobs. Canelo might be too small to beat those fighters unless he looks like he did in his fight against Golovkin last September. Canelo looked like a bodybuilder in that fight. He was huge. If Canelo can continue to look like that, he’ll give Derevyanchenko, Jacobs and Charlo a lot of problems. The question will Canelo be able to keep putting on that kind of size without it hurting him? He was having stamina problems throughout the fight against Golovkin, and only seemed capable of fighting hard for the first 30 to 45 seconds of each round.

”Against Martirosyan, this is how he attacks a fighter that he doesn’t need to worry about what’s coming back,” Kellerman said. “He goes in to end the fight. I’m not suggesting that Triple G needs to open up with shots against top notch technical fighters, but there’s a certain type of mentality that he brought to this fight that he’s brought to fights previously to the Danny Jacobs fight that has been absent since. Is it because he’s been fighting Jacobs and Canelo? Martirosyan is more like the fighters that he plowed through. Can he regain that kind of mentality against fighters like Jacobs and Canelo? If they have a rematch on Mexican Independence Day weekend, can that Triple G show up Mexican style,” Kellerman said.

Triple G does need to fight more with his old style of slugging than he does with his newer more conservative style that we saw from him against Canelo and Jacobs. That style does not work against the better fighters, because it puts Golovkin in a position where he’s fighting a chess match instead of using his power like he’d done in the past to win his fights by knockout. Golovkin has good enough boxing skills to where he can probably still beat Canelo and Jacobs by boxing them like he did previously, but it will require that there’s quality judges working the fights. We didn’t see great judging from either of Golovkin’s fights last year against Canelo and Jacobs. It’s quite possible that Golovkin could have similar judges when he fights Canelo and Jacobs again. That’s why it’s better for Golovkin to fight in the same aggressive manner that he fought Martirosyan if he wants to make sure the judges don’t score another controversial decision.

“You can that there’s a certain recklessness that needs to be part of the real Triple G?” HBO commentator Jim Lampley asked Kellerman.

Sanchez wants GGG to fight Murata if no Canelo fight in Sep. »