Jaime Munguia: Is he Golden Boy’s next Canelo Alvarez? 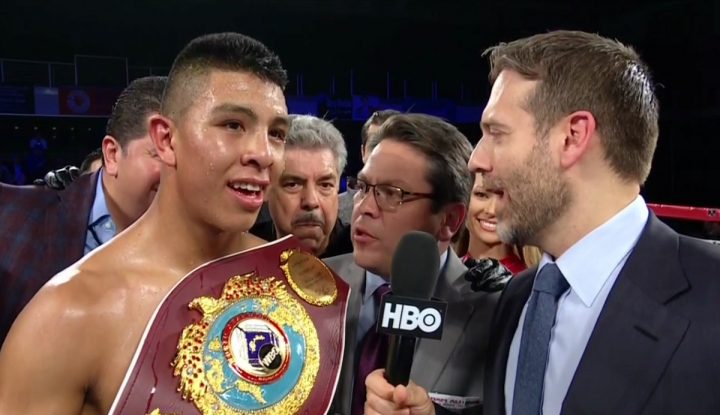 By Sean Jones: Jaime Munguia (29-0, 25 KOs) had his coming out party last Saturday night in obliterating a very good fighter in WBO junior middleweight champion Sadam Ali (26-2, 14 KOIs) in a 4th round knockout at the Turning Stone Resort in Verona, New York.

Munguia might be a better version of Saul Canelo Alvarez. Golden Boy can do a lot with Munguia that they can’t do with the 5’9” Canelo due to his limited height and poor stamina. Canelo basically only fights hard for the first 45 seconds of each round. He spends the last two-thirds of every round recovering from the expenditure of energy in the first minute. Munguia doesn’t have those limitations. He’s tall at 6’1”, and is capable of fighting the full 3 minutes of every round. Moreover, Munguia doesn’t need to rest on the ropes the way Canelo does when he gets tired.

Munguia stays on the attack the whole time in his fights, and he’s good at jumping in and jumping out. Munguia’s fighting style is similar to super middleweight Jose Uzcategui, but with more body punching. Munguia has a lot of potential to be a star at 154, as long as Golden Boy takes it easy with him for a while to get more experience before they put him in with the likes of Jermell Charlo, Erislandy Lara, Kell Brook and Jarrett Hurd.

In total, Munguia knocked Ali down 4 times in the fight, although he was only given credit for 3 knockdowns. The referee Gary Rosado was forced to stop the fight in round 4 after Ali was flattened by a pulverizing right hand from Munguia. Ali sprang up off the canvas immediately, looking anxious to continue fighting, but the referee Rosado decided to halt it anyway. The fight was too much of a one-sided match for it to be allowed to continue. The fight was stopped at 1:02 of round 4. Munguia is now the new WBO junior middleweight world champion. His promoters at Golden Boy Promotions haven’t said which direction they intend on taking him.

With Saul Canelo Alvarez’s career now looking shaky after his 2 positive tests for clenbuterol, Golden Boy Promotions could have the perfect replacement for him in the 6’1” Munguia. He’s younger, bigger and he looks to be more powerful than the 27-year-old Canelo. The Mexican star Canelo is a good fighter, but he’s small for the middleweight division and his future in that weight class is a question mark.

Munguia is a natural 154 to 160 lb. fighter, and he doesn’t have to bulk up the way Canelo did for his last two fights against GGG and Julio Cesar Chavez Jr. If anything, Munguia might need to try and keep his weight down, because he could rapidly find himself too big to fight even at middleweight. Munguia might wind up at super middleweight or light heavyweight by the time he’s finished filling out. At junior middleweight, Munguia looks thin, and that suggests that he would be better off at middleweight.

Munguia vs. Ali was televised on HBO World Championship Boxing last night. Munguia came into the fight as a highly respected prospect, which is said to have been the prospect of the year for 2017. Being a prospect, Munguia wasn’t considered as the favorite for the fight.

Munguia weighed a whopping 170 pounds last Saturday after rehydrating for his fight with Ali. For all intents and purposes, Munguia was a light heavyweight inside the ring on the night. Being that big suggests that Munguia has the size to move up to middleweight soon and compete with the likes of Canelo, Jermall Charlo, Gennady Golovkin, Demetrius Andrade, Billy Joe Saunders, Daniel Jacobs and Sergiy Derevyanchenko.

Munguia came close to getting a title shot against IBF/IBO/WBA/WBC middleweight champion Golovkin (38-0-1, 34 KOs) on May 5 of this month, but the California State Athletic Commission nixed Team GGG’s plans for using him, saying that he isn’t a middleweight and he didn’t have the prior experience in against world level opposition at the time. Munguia now has experience after his 4th round demolition job against Ali, 29, last Saturday night. If Team Golovkin offers Munguia a second title shot, which would seem unlikely at this point, he’ll have a better chance of getting the fight. Munguia would have done a better job against Golovkin than Vanes Martirosyan did. Munguia is still better off not having fought Golovkin, because now he’s the new WBO junior middleweight champion and he a lot of opportunities available for him.

The Ali-Munguia fight was so one-sided that it should have been over with by round 3, as the 21-year-old Munguia had knocked Sadam Ali down 2 times and he was hurting him with every punch he threw.

“This victory is something huge for me,” said Munguia. “This is a dream come true. Every fighter dreams of this. I want to thank the Nevada Commission for making this opportunity possible as they didn’t allow me to fight Gennady Golovkin. I want to show that I am ready to fight at the highest level and with the best fighters.”

It was obviously disappointing for Munguia to be rejected by the California Commission as an opponent for GGG to fight for his May 5 fight at the StubHub Center in Carson, California. Munguia would have received a good payday and a lot of notoriety in facing the highly popular Triple G. But if Munguia had taken that fight, he would have surely been bludgeoned into submission by Golovkin in lightning fashion.

Munguia is a good puncher, but the defense that he showed last night in round 3 was too poor for him to last long against an experienced knockout artist like Golovkin. Round 3 was the only round in which Sadam mounted an attack on Munguia, and it was a brief one at that, landing a few seconds. Munguia took some shots from Sadam, and he looked very vulnerable at that time. Against someone like Golovkin, Jermell Charlo or Jarrett Hurd, Munguia would have been in a bad way last night. Golden Boy needs to be careful with Munguia. He’s a world champion now, but he’s still raw and not ready to be thrown to the lions.

“He [Munguia] caught me early,” said Sadam Ali after the fight. “That’s what affected me. I don’t want to give any excuses. He was the better man tonight. I have to check with my team to see what’s next for me,” Ali said.

Ali never recovered from the first big left hook from Munguia that knocked him down in round 1. Ali was on weak legs and in serious distress from that point on. It was brutal to watch. The referee wanted to stop the fight in the 3rd, but he waited until the 4th to finally end it. Ali looked plump last night, like he was carrying around extra fat instead of muscle. He isn’t a natural junior middleweight, and you can argue neither is Munguia. He weighs the same as Golovkin does after he rehydrates in coming in at 170. Munguia could be fighting at middleweight.

Sadam isn’t saying whether he’s going to move back down to his old weight class at 147. But if he’s going to stay at junior middleweight, he’ll need to be able to take the power of those fighters, he looked like he wasn’t handling Munguia’s power at all last night. Ali’s size and lack of punching power is also an issue. He’s not big for a junior middleweight, which means he’s always going to be at a disadvantage when he faces fighters like Jarrett Hurd, Jermell Charlo and Erislandy Lara.