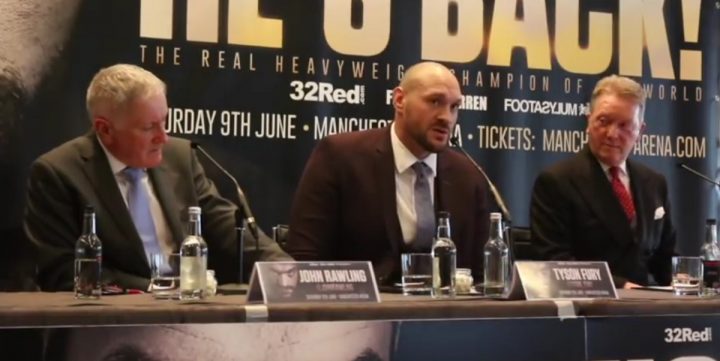 By Tim Royner: Tyson Fury (25-0, 18 KOs) will be taking a tune-up level opponent for his June 9th comeback fight at the Manchester Arena in Manchester, England. Fury’s promoter Frank Warren said that he will take “three to four fights” before he steps it up against the best fighters in the heavyweight division.

Fury’s comeback opponent is expected to be a lower level journeyman or a domestic level heavyweight. Someone like David Price would be idea for Fury to fight, but even he might be too good. Fury hasn’t exactly been living a Spartan lifestyle since he beat Wladimir Klitschko by a 12 round unanimous decision in a huge upset victory in November 2015.

Fury ate himself up to 360 pounds and lived the life of a non-athlete. Now all of a sudden, Fury has lost the weight and he wants to resume his career at the top of the heavyweight division. It’s not likely that he’ll be at all successful, but he’s got to give it a shot. If nothing else, Fury will get the fight with Anthony Joshua at some point.

Shannon Briggs, 47, isn’t in the running for Fury’s comeback fight. Fury reportedly will be working his way up to a fight with Briggs at a later point. That sounds a little ridiculous that a fighter as young as the 29-year-old Fury needs a tune-up or two to get ready to fight someone as old and inactive as Briggs, but it shows you the concerns that he has. Fury isn’t confident enough to face the 47-year-old Briggs.

“I’m still a lineal heavyweight champion, and if they ever want to be considered the best of their era, then they have to beat this man here,” Fury said. “They’ve got my belts, they aren’t mind anymore. I didn’t keep hold of the belts. I had personal problems, and the other guys have got hold of them – Parker, Joshua and that’s it.”

There are only three heavyweight champions now – Joshua, Deontay Wilder and Manuel Charr – and the only one that Fury has his eyes set on fighting in the near future is AJ. Wilder won’t give Fury the same big payday, and he’s clearly too dangerous for him. At least Fury has an excuse for why he’s going to be targeting IBF/WBA/WBO heavyweight champion Joshua, because he has three of his titles now in his possession.

Fury is probably going to take on someone in the class of Kevin Johnson or Jason Gaverne for his comeback fight on June 9th. Boxing fans need to put out of their mind completely the image of Fury from his last fight against Wladimir Klitschko in November 2015. That version of Fury won’t likely be there on June 9. That fight took place when Fury was still fighting twice a year, and he wasn’t taking long periods of tie off between fights. The version of Fury that we’ll be seeing in his comeback fight will be a slower, older, more ponderous Fury. His stamina likely won’t be good, because he’s been hanging around his house for 2 ½ years, doing very little and eating extremely well.

Even if Fury’s comeback doesn’t end up well, it might make him more health conscious to take care of himself. As heavy as Fury had gotten in his two and a half years out of boxing, his health might have been at risk if he continued to carry the 360 lbs. around with him. You’d have to believe that Fury would have eaten his way to 400 lbs. before long, and there aren’t too many people that live for long when they’re that heavy. If Fury winds up retiring after he gets a big payday fight against Joshua, he should look to keep his weight down as low as possible so he can have a long life. It’s not good for Fury if he’s going to be walking around with his weight hovering in the 400 lb. region.

“I believe I needed that,” Fury said to skysports.com about his 2 ½ year break from boxing. “I believe it was a must and I couldn’t take any more boxing at the time. Now I have the hunger back and I’m back to the beginning. It’s like I’m turning pro again, professional debut,” Fury said.
There are some boxing fans that believe that Fury will go back into a depression when he’s met with adversity, and perhaps loses a fight or if he’s heavily criticized by people. It didn’t take a loss for Fury to get down on himself after his win over Wladimir Klitschko. You would think that Fury would be happy after he won that fight, but for some reason the elation that he briefly had after winning the fight didn’t last long.

”Everything is still there – 29 years old, coming into the prime of my life, I’m stronger and faster, holding more muscle mass than ever. I’m more confident looking at the competition,” Fury said.

If Fury is still what he once was physically, then there’s no need for him to fight a tune-up level opponent for his June 9th comeback. He should be able to take the fight with Briggs straightaway. Briggs doesn’t believe that he’ll do that. He’s saying that Fury is going to take a tune-up fight for his next fight rather than fight him, and he thinks it’s kind of a joke.

The bad thing about Fury taking a tune-up level opponent is if he looks really bad against them, it’s going to create a lot of doubt about his future. That’s why it’s in Fury’s best interest to at least fight someone that has a pulse. David Price would be perfect, but he suffered a fractured nose and bad cuts in his recent fight against Alexander Povetkin on March 31. Price won’t be ready to fight Fury on June 9.

Spoiler early…. tomorrow #WankWarren will announce that #PieSonFury aka will fight a pie 🥧 because he need a tune up before he feed him to me. He candy bar sweet 🤣😂🤣 He not ready. He never will be. 😂🤣😂🤣 It’s Pie season baby boy!!!! #LETSGOCHAMP #trashcanman

Golovkin expected to face Martirosyan on May 5 »