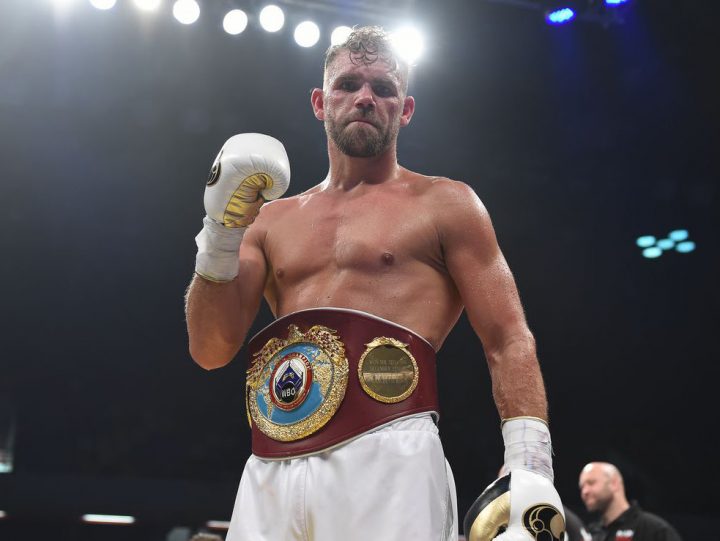 Saunders, 28, doesn’t understand why Golovkin won’t face him in September rather than Canelo, because he has the WBO middleweight title in his possession. Golovkin probably would readily accept a fight against Saunders if he didn’t have the chance to fight Saul Canelo Alvarez on HBO PPV in a rematch. There’s so much money for Golovkin to make fighting the superstar Canelo a second time.

In contrast, Golovkin-Saunders probably wouldn’t be near big enough of a fight to make it on HBO PPV. Saunders is not a big name in the States, and the casual boxing fans wouldn’t care at all that it’s a unification fight for Golovkin. It wouldn’t matter if HBO and Golovkin’s promoter advertised the Saunders fight as being a world title unification. The casual fans still wouldn’t care, because they don’t know who Saunders is and titles are no longer important due to the sanctioning bodies watering down each division with their multiple world titles.

”I’m not interested in fighting anybody else,” Saunders said. “Golovkin is the one I want. He keeps saying he wants to unify. Well, here I am and I’m ready to have it with him.”

Saunders’ 12 round unanimous win over David Lemieux has given him a little too much confidence. Golovkin did a better job in beating Lemieux by an 8th round knockout in 2015 in a fight that was more one-sided than Saunders’ win over the same guy. Even if Golovkin has lost a step or two, his power and jab is still more than good enough to destroy Saunders within 6 rounds. This isn’t even the best opponent for Golovkin. Saunders is merely a belt holder, and not a popular one. Golovkin can get more attention from the boxing world by fighting Daniel Jacobs, Sergiy Derevyanchenko, Demetrius Andrade or Jermall Charlo. Saunders is well below those fighters. It would be too easy for Golovkin.

Golovkin could face Canelo in September of this year, and May of 2019. If the two stars are going to face each other three times, Golovkin’s management are likely going to push to make the third fight happen in May of 2019 rather than in September. The reason why is Golovkin’s age. He just turned 36, and it’s not beneficial for him to have his fights with Canelo strung out far into the future. Golovkin wants the Saunders fight, but there’s nowhere near the same kind of money in that fight for Triple G than what he can make in facing Canelo Alvarez. Saunders isn’t even popular in his own country. He has some of a following, but he’s no at the level of guys like Anthony Joshua.

Saunders wants Golovkin to travel to the UK to fight him. If that’s not a deal killer, then the fight can possibly happen in 2019. If Golovkin loses a controversial decision, then it won’t look good for Saunders. If Golovkin does choose to take a risk of fighting Saunders in front of his own boxing fans in the UK, he’ll need to make sure that there are a set of quality judges working the fight.
Saunders’ hand injury is preventing him from stepping in to face Golovkin on May 5th as the replacement for Saul Canelo Alvarez.

If Golovkin faces Saunders, he’s going to have to be ready to deal with a lot of movement, because he’s going to be on his bike the entire time in trying to out-box him the way he did against David Lemieux last December. That fight seems to have given Saunders a lot of confidence that he can do the same thing against Golovkin. That might be hard for Saunders to do, because Golovkin is faster on his feet than Lemieux, and he’s taller, and has a better jab. Lemieux looked like he was out of shape against Saunders, and he never cut off the ring the way he was supposed to.

Saunders lacks the punching power needed to keep Golovkin off of him. Golovkin would have no respect for Saunders’ punching power, and he would literally force him to stay in motion for 3 minutes of every round. That kind of Erislandy Lara safety first style isn’t going to work against Golovkin. Saunders doesn’t have the same jab that Golovkin possesses, so he’s going to have to try and fight him rather than staying on the outside. Golovkin will mug Saunders because he lacks the power to make him show respect. Saunders is just another variation of Willie Monroe Jr., who Golovkin went after all out and stopped him from running by throwing body shots.

“I think Canelo has been caught and I think he’s an absolute cheat and an absolute liar. End of story,” said Saunders. ”There are no excuses. The one he’s tried to use [contaminated meat] is the oldest trick in the book, and it’s absolute rubbish. He should get a lengthy, lengthy ban for what he’s done.”

Canelo won’t be receiving a long suspension by the Nevada Commission, because this is his first time that he’s tested positive for a banned substance during his 13-year pro career.
Saunders might be ruining his only chances of getting a fight against Canelo by trash talking him the way he’s doing. That’s the bigger money fight for Saunders than a fight against Golovkin.
Saunders isn’t in charge of disciplining Canlo Alvarez for his two positive tests for clenbuterol. But if Saunders was one of the five-member panel of Nevada State Athletic Commission panelists, you can bet that he would vote for a 1-year suspension for Canelo.

Martirosyan rejected for Golovkin fight by IBF, WBA and WBC »