Mayweather: Crawford vs. Spence will soon be biggest fight in boxing 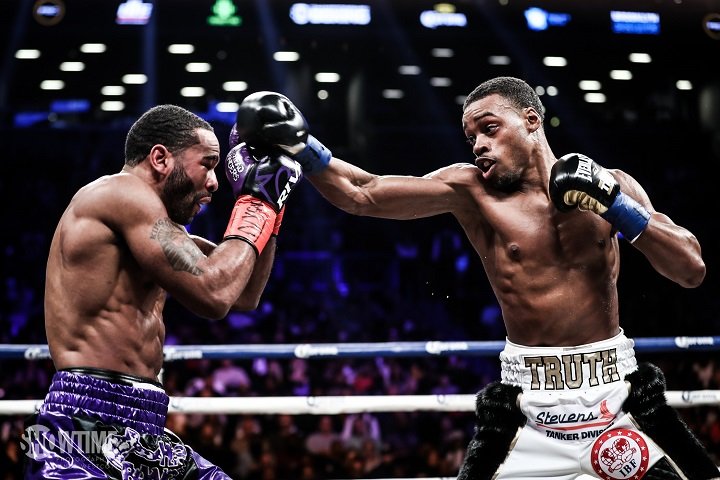 By Chris Williams: Floyd Mayweather Jr. states that within a short period of time, a fight between IBF welterweight champion Errol Spence Jr. (23-0, 20 KOs) and former two division world champion Terence Crawford (32-0, 23 KOs) will be the biggest fight in boxing.

Mayweather notes that the fight isn’t the biggest fight in the sport right now, given that neither fighter is a huge star, but in the future he sees it as being a fight that the boxing public will want to see.

Crawford, 30, can’t afford to wait too long before he starts aging. Crawford isn’t a huge puncher. He’s a guy that gets by on his speed and timing, and those are things that disappear with age. The 28-year-old Spence is more of a raw power guy with good skills. He’s likely going to last longer than Crawford in this sport.

“Soon the biggest fight in boxing is going to be Errol Spence vs. Terence Crawford in the future,[but] not now,” Mayweather said to Fighthype. ”I’ll pay to see it.”

I’m not sure that Crawford-Spence will ever be the biggest fight in boxing. Crawford isn’t fighting big enough names to increase his star power to any extent. Crawford has burned through the last four years of his career without increasing his star power in a major way, and the reason for that is because he’s been facing these guys: Felix Diaz, Henry Lundy, Victor Postol, Thomas Dulorme, John Molina Jr., Julius Indongo, Dierry Jean, Raymundo Beltran and Yuriorkis Gamboa. Those aren’t well-known fighters with the casual boxing fans. Crawford needed to be fighting the likes of Danny Garcia, Shawn Porter, Adrien Broner, Amir Khan, Keith Thurman, Spence, Lucas Matthysse, Vasyl Lomachenko, and Jessie Vargas.

It’s nice that Crawford will be challenging WBO welterweight champion Jeff Horn (18-0-1, 12 KOs) on June 9, but even if he wins that fight, there’s not much to look forward to with his career. If Crawford’s promoter Bob Arum of Top Rank isn’t able to work with the other promoters to put together fights that can increase Crawford’s popularity, then he’s not going to go anywhere.

Crawford isn’t going to become hugely popularity by fighting Jeff Horn and Konstantin Ponomarev. Those are fights that won’t create a lot of interest from the casual boxing fans. Moreover, Crawford needs to change his fighting style, because he moves too much, switch hits and it too dialed into counter punching.

The typical boxing fan wants to see guys that bring it like middleweight champion Gennady Golovkin. He’s the gold standard for what boxing fans want in the U.S. Saul Canelo Alvarez is popular, but he but he only fights in spurts and he need a lot. Of rest breaks. Due to his stamina problems, Canelo isn’t as exciting as Golovkin. Crawford is well behind those fighters and Spence.

The fighters with the most exciting fighting styles from 140 to 160 are these guys:

The dull safety first fighters are these guys:

For Crawford to get on the list where the exciting fighters are at like Spence and Golovkin, he’s going to need to do a complete overhaul of his game. That means stop holding, running, showboating, counter punching and constantly changing stances. Crawford needs to become a pressure fighter like Golovkin, and look to score knockouts instead of just boxing and spoiling all the time.

Spence isn’t fighting often enough to become a star. He’s only fought once in the last 11 months, and he’s not scheduled to fight until June when he defends his IBF 147 lb. title against little known Carlos Ocampo. That fight isn’t going to do anything for Spence’s career. It’s a horrible fight. Spence is thrown a year of his career away by fighting just 1 time. If this is how things are going to be for Spence in the future, then he’s not going to increase his popularity in a substantial way.

No,” Mayweather said when asked if he agreed with Crawford’s trainer that Thurman is a tougher fight than Spence. ”I was 35 when I boxed these guys. I knew Errol had it, and I don’t need to box Terence Crawford to know that he’s got it,” Mayweather said.

Of course, Spence is a tougher fight for Crawford than Thurman. There’s no doubt about it. Thurman is a hit and run type of fighter, and his stamina isn’t good at all.

Mayweather doesn’t like the way that Thurman is letting his fight with Spence marinate so long, as if by waiting it will become bigger. It’s not becoming a bigger fight, especially with Thurman fighting just once a year for the last two years. Thurman isn’t willing to take the tough fights now in order to become a bigger star. Early in Mayweather’s career before he was a PPV star, he took the dangerous fights for low money in order to increase his popularity in the boxing world. Mayweather didn’t let fights against the likes of Diego Corrales and Jose Luis Corrales marinate in order to make them bigger. He fought those guys so that he could increase his popularity, and it worked.

Mayweather became a PPV attraction by fighting the best right away rather than putting them off for years and years hoping the fight will become bigger later. Mayweather understood that the fastest way to make himself a star was to take the difficult fights right off the bat rather than letting them marinate. Mayweather did le his fight with Manny Pacquiao marinate, but I think the main reason for that is because the Filipino star was with Top Rank promoter Bob Arum, and that was a guy that Mayweather was promoted by earlier in his career. I don’t think Mayweather wanted to go that route. If Pacquiao wasn’t promoted by Arum, I think Mayweather would have fought him years ago as far back 2009. I doubt that Mayweather would have waited.

“High reward…I mean, it’s not like that’s a pay-per-view fight,” Mayweather said of a fight between Thurman and Spence. ”A high risk and a high reward is pay-per-view. They both can fight they a– off. Thurman, he can box a little bit actually. That’s going to be a huge fight. I’ll pay to see it. I know if a guy got it,” said Mayweather. 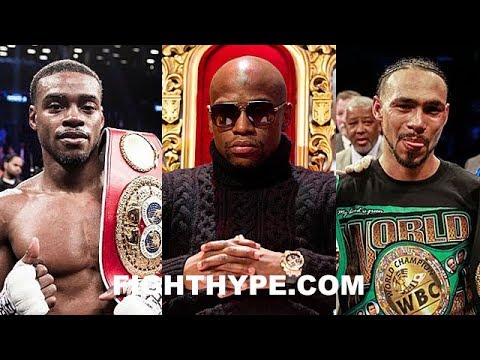