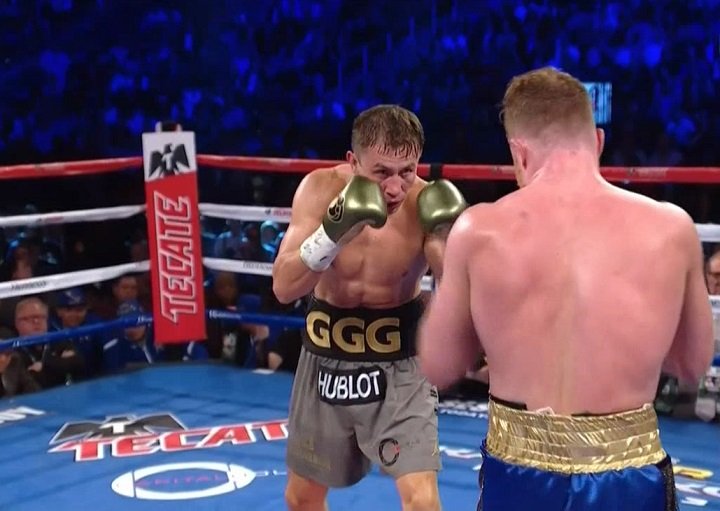 By Dan Ambrose: Tom Loeffler says he still hasn’t nailed down the opponent for middleweight champion Genady Golovkin to fight on May 5th on HBO at the StubHub Center in Carson, California. Loeffler says it’s still in “flux” as far as GGG’s May 5th date and opponent.

What Loeffler is saying is that IBF mandatory challenger Sergiy Derevyanchenko (12-0, 10 KOs) will NOT be facing Golovkin (37-0-1, 33 KOs) on May 5th. Loeffler that fight is not going to be happening on that date, because he says there’s not enough time to properly build the fight in the next three weeks before May 5. Derevyanchenko won’t be damaged by him having to wait longer for the Golovkin fight, says Loeffler.

Loeffler says Saul Canelo Álvarez’s hearing with the Nevada State Athletic Commission this week on Wednesday, April 18 could help decide what happens with Golovkin’s next fight on May 5. Loeffler doesn’t say exactly how Canelo’s potential 6-month suspension would impact Golovkin’s next fight, but it’s quite possible that the fight might be canceled if the Mexican star receives a 6-month reduced suspension, which would end in August of this year.

Golovkin would then opt to stay out of the ring for the next 5 months and wait for Canelo. That’s unwelcome news for the boxing fans that have been waiting for the last seven months for Golovkin to return to the ring, but there’s a lot of money that the Kazakhstan fighter can make in a rematch with Canelo. Golovkin might not want to jeopardize that payday by fighting on May 5th against a replacement opponent, which is expected to be Vanes Martirosyan (36-3-1, 21 KOs).

“Everything is in flux with Triple G,” promoter Tom Loeffler said about Golovkin’s next fight. “He told me he wants to fight on May 5th, and I’m doing my best to try and keep that together. Triple G is NOT fighting [Sergiy] Derevyanchenko on May 5th. So, if Derevyanchenko has to wait for the next time, then he’s not being damaged. This is nothing against Derevyanhenko but the mandate…the fight needs to be promoted the right way. The bigger we can build that fight [the better it is],” Loeffler said in ruling out Derevyanchenko for May 5th as Golovkin’s opponent.

It looks to some boxing fans like Loeffler is letting Canelo dictate the career of Golovkin. If he’s going to be giving up fight dates just so he can wait on a rematch with Canelo, then it’s not good, because this would be the second fight date that he’s missed out. For the boxing fans that don’t remember, Golovkin didn’t fight last December after him and Canelo fought to a 12 round draw last September. It was said that Golden Boy Promotions didn’t want Golovkin to fight in December because it would jeopardize the Canelo rematch in May of this year.

So, Golovkin stayed out of the ring and missed out on a December fight date. Now it’s possible that Golovkin will miss out on his May fight date as well just so that he can wait on his rematch with Canelo. If Golovkin skips the May 5th fight, then he’ll have lost two paydays. Whatever money Golovkin ultimately makes for the Canelo fight in the rematch, it won’t be as much as you’d think, because he missed out on two paydays in December and May. I don’t know if Golovkin really cares too much about that, but I think a lot of fighters would. If they couldn’t fight twice and had to sit for an entire year to face an opponent, they wouldn’t be too pleased about it.

”Murata had a great win in Japan. Murata sells out in Japan,” Loeffler said. ”He draws huge crowds. He trained with Triple G and Abel Sanchez, and he’s an Olympic gold medalist. Bob Arum was there last night,” Loeffler said.

Loeffler wants to match Golovkin against WBA ‘regular’ middleweight champion Ryota Murata (14-1, 11 KOs) soon, possibly in 2019. Murata, 32, is a 2012 Olympic gold medalist from Japan, and he has a HUGE fan base in that country. Loeffler says that Gennady and Murata would sellout the Tokyodome in Tokyo, Japan. It would be a good money fight for Golovkin, but it wouldn’t create much noise in the U.S. unfortunately, because Murata is an unknown in the States. Top Rank has televised a couple of Murata’s recent fights, including Sunday’s title defense against 38-year-old Emanuele Blandamura (27-3, 5 KOs). Murata won that fight by an 8th round knockout, but he looked very average and beatable Murata would likely be a much easier fight for Golovkin than Derevyanchenko, WBO middleweight champion Billy Joe Saunders, Jermall Charlo or Danny Jacobs.

“The Commission is supposed to go into their investigation for what they found and their results and then they’ll make a recommendation,” Loeffler said about the Nevada State Athletic Commission about the April 18th hearing for Saul Canelo Alvarez. “If there’s a suspension, how long is the suspension? Let’s see what happens April 18, and then we’ll have a lot better idea what happens May 5, and September what happens with the IBF. We can’t answer a lot of questions right now, but I think a lot of clarity will be coming out this week,” said Loeffler.

It looks like Loeffler is going to wait for the Nevada Commission to meet with Canelo on Wednesday before he decides what to do with Golovkin’s May 5th fight date on HBO. You can bet that if Canelo is given a 6-month reduced suspension, then Loeffler will have Golovkin skip the May 5th date and wait for Canelo to face him in September.

”Just like Murata fighting in Japan, if Triple G goes over there, it would sell out the Tokyodome, that fight with Murata,” Loeffler said.

Murata seems to be the guy that Loeffler is interested in matching Golovkin up in the future. It’ll be interesting to see if the International Boxing Federation allows Loeffler and Golovkin to bypass Derevyanchenko to face Murata later this year or in early 2019. This would be a business-related fight rather than a fight for the sport. The fans want to see Golovkin fight Canelo, Charlo, Derevyanchenko and Jacobs. Murata is way down on the list of opponents that the boxing fans in the U.S want to see Golovkin fight.

Klitschko: Deontay Wilder would be dangerous fight for Joshua »