Emmanuel Rodriguez vs. Paul Butler on May 5 for vacant IBF 118lb title 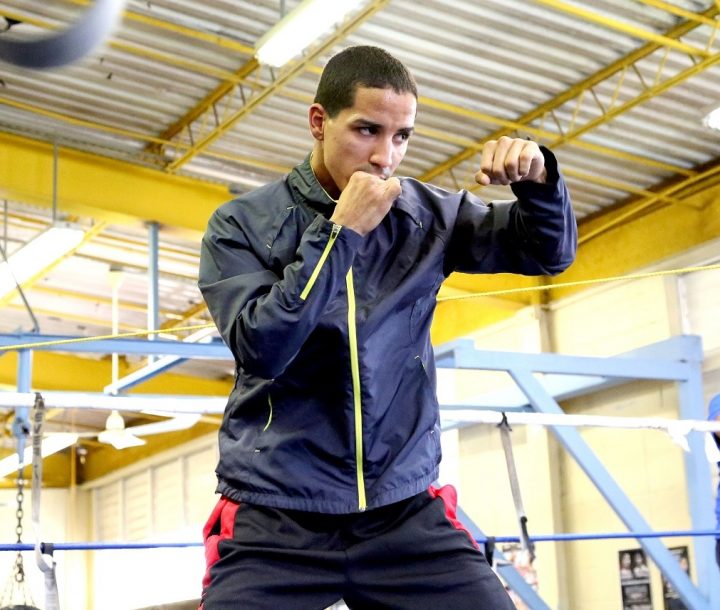 By Scott Gilfoid: Emmanuel Rodriguez (17-0, 12 KOs) and Paul Butler (26-1, 14 KOs) have agreed on a deal to face each other for the vacant IBF bantamweight title on May 5th on the undercard of the Tony Bellew vs. David Haye 2 rematch at the O2 Arena in London, England.

Rodriguez, 25, and the 29-year-old former IBF bantamweight champion Butler were supposed to have had a purse bid on April 3, according to ESPN. The IBF allowed the two fighters’ management to delay the purse bid so they could work on a deal. A deal was finally reached for Rodriguez and Butler to face each other on the 5th of May on the Bellew-Haye card at the O2.

Butler held the IBF 118 lb. title from June 2014 to July of the year. Butler beat Stuart Hall by a 12 round split decision on June 7, 2014 to win the IBF title. Butler than gave up the IBF title without ever defending it unfortunately. Not long after that, Butler was stopped in the 8th round by Zolani Tete on March 6, 2015. Tete knocked Butler down in the 8th round, and then the fight was halted.

Since that loss, Butler has won his last nine fights in the last three years, including a 12 round unanimous decision victory over Hall in their unnecessary rematch last September. It’s unclear why Butler bothered to fight Hall a second time, as he’d already beaten him once before. You would think that Butler’s management would have moved him beyond the domestic level fights by this point in his career.

As the IBF mandatory, Rodriguez was set to face former IBF bantamweight champion Ryan Burnett (19-0, 9 KOs), but he gave up the belt rather than taking the fight. Some boxing fans believe that Burnett got cold feet at the idea of facing the talented Puerto Rican Rodriguez, because of the high potential that he would have been soundly beaten.

”You’re lucky for not fighting me for the IBF World title, but I guess you’re smart by leaving the title vacant. We know you left the title because you know deep in your heart, that the title belongs to me. Burnett saw how I won the gold medal at the Singapore Youth Olympic Games in 2010. I won the ‘Best Fighter Award.’ If Burnett has some honor left, we can unify the belts in front of his people,” Rodriguez said.

NEWS:   In Defense of the Brawlers

It’s too bad Burnett gave up is IBF bantamweight title rather than defending it against Rodriguez, because that would have been the right thing to do.

Rodriguez is going to be a huge problem for Butler, who can’t punch and more of a crafty type of finesse type of fighter. Rodriguez is a 6-year pro with explosive punching power and loads of talent. Rodriguez has stopped seven out of his last 8 opponents he’s faced with victories over Giovanni Delgado, Robinson Lavinanza, Alberto Guevara, Eliecer Aquino, Alex Rangel, Luis Hinojosa, Gabor Molnar and Miguel Catagena.


« Khan still angry at Lo Greco, wants to boss him