Adrien Broner: I needed a change 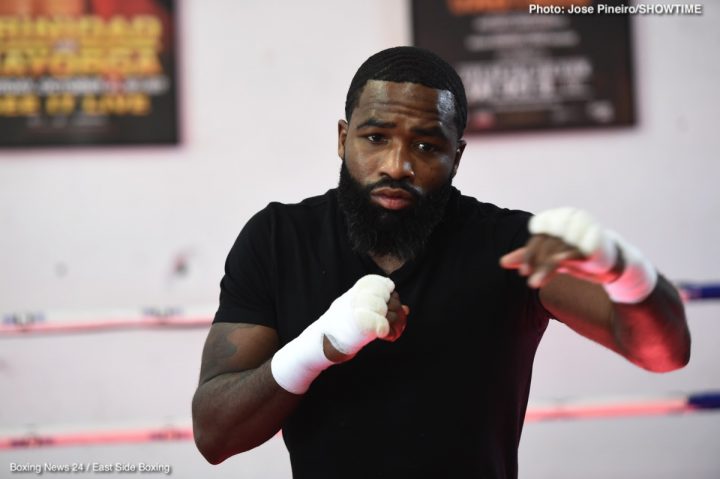 By Jim Dower: Adrien Broner has changed trainers from Michael Stafford to Kevin Cunningham to try and rejuvenate his slumping career to start winning once again like he used to. Broner (33-3, 24 KOs) is fighting Jessie Vargas (28-2, 10 KOs) on April 21 on Showtime Championship Boxing in a catch-weight at 144 pounds at the Barclays Center in Brooklyn, New York.

The televised portion of the Showtime fight card starts at 9:00 p.m. ET/6:00 p.m. PT. Broner really needs a victory here if he wants to remain a headliner fighter. Broner has lost every time he’s stepped up against better opposition in the last five years of his career, and he cannot afford to keep losing if he wants to be main even fighter.

There are too many other talented fighters in the 140 and 147 lb. weight classes that aren’t losing right now. They can easily take Broner’s place. Right now, Broner is getting by on his past accomplishments and his ability to trash talk more so than what he’s done with his career in the last five years, because he hasn’t done much since his loss to Marcos Maidana in 2013.

Broner, 28, feels like he lost fights that he should have won against Mikey Garcia, Shawn Porter and Marcos Maidana. Broner says he was doing everything he could, but he needed something different from his trainer. In looking at those fights, Broner was outworked in each of them, and that’s a problem that no trainer can fix. If Broner is unable to force himself to throw more punches, he’ll continue to lose fights in the same manner against guys that can outwork him, wich isn’t that hard to do.

“I had to change things. I’m getting all that I can do out of what I’m doing but I keep coming up short for these fights that I’m supposed to be winning. So, it was time for a change,” Broner said.

Well, if Broner comes up short against Jessie Vargas on April 21, it’s going to be interesting to see what he says. Does Broner put the blame on the shoulders of his new trainer Kevin Cunningham or does he look in the mirror and accept responsibility for not doing what he needed to do, which is throw more punches and defend better. It would be sad if Broner replaces Cunningham too because he felt he should have won the fight with Vargas.

Vargas, 28, is seen as the favorite to beat Broner in the eyes of a lot of boxing fans. For Broner to win this fight, he’s going to need to show more power than what he’s shown in the past, and he’ll need to throw a lot more punches.

“I felt like it was time to change. I hear people say, ‘You are expected to change but you don’t, that’s why you end up in the same spots over and over’. So, I have to change something to get a different result,” Broner said.

Broner might be making a mistake on facing a welterweight on April 21 rather than sticking with the fighters from the 140lb. weight class. It’s already been established that Broner isn’t a welterweight, so it makes no sense for him to be fighting Vargas. The problem with Broner only fighting opposition from the liht welterweight division is the fact that there are so few big names in the division. Broner already lost to Mikey Garcia, who is now easily the most popular fighter at 140.

The other top guys in the light welterweight division – Kiryl Relikh, Jose Carlos Ramirez, Regis Prograis, Terry Flanagan, Sergey Lipinets and Josh Taylor – aren’t popular enough for Broner to get a lot of attention fighting them. That’s why Broner might need to continue to take risky fights against welterweights from time to time in order for him to get the bigger fights for more money. I don’t know if Broner can beat the top guys in the light welterweight division. That’s a problem that he has as well. As good as Broner is, he doesn’t have the power at light welterweight for him to dominate the way he did when he was fighting at super featherweight ad lightweight.

“The only real punishment that I’ve taken in this sport was against [Marcos] Maidana—I got a fractured jaw,” Broner said. In the Shawn Porter fight, he outwrestled me and in the Mikey [Garcia] fight, he just outworked me.”

It seems like Broner is making excuses for why he lost to Maidana, Porter and Garcia. Broner lost to Maidana, not because he got a fractured jaw. Broner lost that fight was because he stood stationary against the ropes against a fighter with more size, power and hunger than him. Broner fought a dumb fight, and he paid for it by losing a 12 round decision. Likewise, Broner’s loss to Porter was the same thing. He was too stationary against a fighter with more power, size and a better work rate than him. Contrary to what Broner says about Porter out-wrestling him all night long, it was Broner that was doing the wrestling. Porter was throwing punches and he had Broner tying him up to try and limit his work rate.

”t’s time to add to my team and that’s why I got coach Kevin Cunningham. He’s going to bring out the best of Adrien Broner,” Broner said.

You can’t blame Broner for wanting to make some changes in his staff. He probably should have done that years ago after his loss Maidana. The addition of Cunningham is five years too late for Broner. Never the less, I’m not so certain that it’s going to change anything significantly in Broner’s game. His main problems are things that can’t be fixed by a trainer. Broner doesn’t have enough hand speed, power and mobility to fight at a super high level in the light welterweight division. There are faster and more powerful fighters than him at 140. What Broner should do is move back down to lightweight or super featherweight and see if he can still dominate in those weight classes like he did in the past.


« Golovkin may need to scrap May 5th fight date