By Jeff Aranow: Adrien ‘The Problem’ Broner had a lot of choice words for his opponent Jessie Vargas and his co-promoter Leonard Ellerbe of Mayweather Promotions during today’s final press conference for their fight this Saturday night on Showtime at the Barclays Center in Brooklyn, New York.

Broner (33-3, 24 KOs) said there is no way that he’s going to lose to Vargas (28-2, 10 KOs) on Saturday night. Broner said that people don’t want him to wear expensive watches and live well. They want to see him lose and be forgotten.

To put it lightly, Broner, 28, seemed agitated to the extreme. He wasn’t focused during the press conference on what was being said by Vargas and his team. Instead, Broner appeared to be listening to music with his head phones on. He was tuning out what was being said, and not being present.

Broner might be upset because he’s expected to lose to Vargas, 28, in the eyes of a lot of people in the boxing world. The fans think Broner lacks the dedication and talent to beat the more serious Vargas. A loss for Broner would be a major blow to his career that has already seen him beaten twice in the last three years to Mikey Garcia and Shawn Porter.

Broner dodged a third loss with a controversial 10 round split decision last year while fighting at home in Cincinnati against Adrian Granados. That was a fight in which Broner appeared to lose 7 of the 10 rounds, but two of the judges gave him a huge break. Broner looked like a shot fighter against Granados and in his last fight against Mikey Garcia, which he lost by a one-sided 12 round unanimous decision on July 29 last year.

”This is a fake-a– press conference,” Broner said. ”I’m just ready to fight. I ain’t worried about Jessie. Honestly, this is a very important fight for my career on a serious level. I know he trained hard. I ain’t worried about that. I’m ready man. I’m ready to fight. We can fight right now. I know we’re going to win. He didn’t win his fights when he stepped up. He lost,” Broner said about Vargas.

Broner said he was ready for his last fight against Mikey Garcia, and yet he still lost a wide 12 round unanimous decision. Is Broner even more ready this time? At some point you have to figure that Broner doesn’t quite have the world class talent at 140 and 147 to beat the best fighters in those weight classes. That’s not to say that Broner isn’t a good fighter. He’s an excellent fighter, but only when he’s competing at super featherweight and lightweight. Broner doesn’t have enough talent to beat the best at light welterweight and welterweight.

Vargas is clearly not one of the top three or four fighters at welterweight, but he’s a top 7 fighter, and he has more than enough skills to beat Broner, who really shouldn’t be fighting at welterweight. Broner has no business fighting in the 147 lb. weight class. Saturday’s fight between Broner and Vargas will be fought at a catch-weight of 144 pounds, but I doubt that it matters.

The weight class is still all wrong for Broner. He’s not a good enough fighter at welterweight to beat the better guys. We’ve seen that happen now on three occasions with Broner losing to Marcos Maidana, Shawn Porter and Mikey Garcia. You can throw Granados’ name in there among that list of fighters that have beaten Broner, as well as Daniel Ponce De Leon. Broner’s 10 round unanimous decision win over Ponce De Leon in March 2011 was also a controversial one.

”I do feel I have an advantage,” Vargas said about him having an advantage over Broner in their fight on Saturday. ”I’m the taller fighter, the stronger fighter, the more experienced fighter, and not only that, I’m a full grown welterweight. I feel very comfortable leading into this fight. I’m ready for victory,” said Vargas.

Vargas, 5’10”, will have a four inch height and a two inch reach advantage over the 5’6” Broner on Saturday. That doesn’t necessarily mean that Vargas will win based on his size, as Broner defeated an even taller 5’10 ½” John Molina Jr. by a one-sided 12 round unanimous decision three years ago in 2015. However, Molina didn’t even try to fight hard. He looked like he was mentally beaten the moment he stepped foot inside the ring. Molina wasn’t throwing punches, and he appeared to be intimidated. Vargas isn’t the type of fighter not to give it his all to try and win. If Vargas loses on Saturday night to Broner, it will be due to him facing a guy that is too good for him. Vargas won’t give up without a fight.

”I don’t want to hear none of that s—t,” Broner said in response to Vargas’ comments about his advantages in the fight. ”When you stepped up and you fought Timothy Bradley you lost and when you stepped up and you fought Pacquiao you lost, so shut that…. What I’m saying is this: I’m a 4-time world champion. I’ve been world champion at ‘47 before. I don’t want to hear nothing. Quit talking about all the losses. You ain’t them. You got to beat me first. I hope y’all give me credit, because I’m going to beat his a–. And I know y’all are against me. Leonard Ellerbe here is against me,” Broner said.

Broner was in the right place at the right time when he fought for those titles. Broner didn’t have to go through the talented guys like Terence Crawford, Miguel Berchelt, Mikey Garcia or Floyd Mayweather Jr. to win his four division titles. He had a lot of wins over soft opposition.

Broner and Mayweather Promotions CEO Leonard Ellberbe had a heated exchange toward the end of the press conference. Here’s what they said to each other:
Ellerbe: “You don’t disrespect me like that.”

Ellerbe: “This isn’t about me. You guys got to fight Saturday night.”

Ellerbe: “And the best man win.” 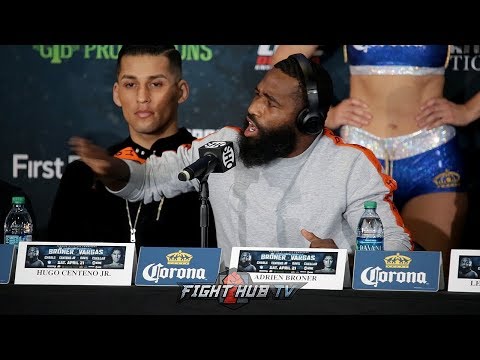