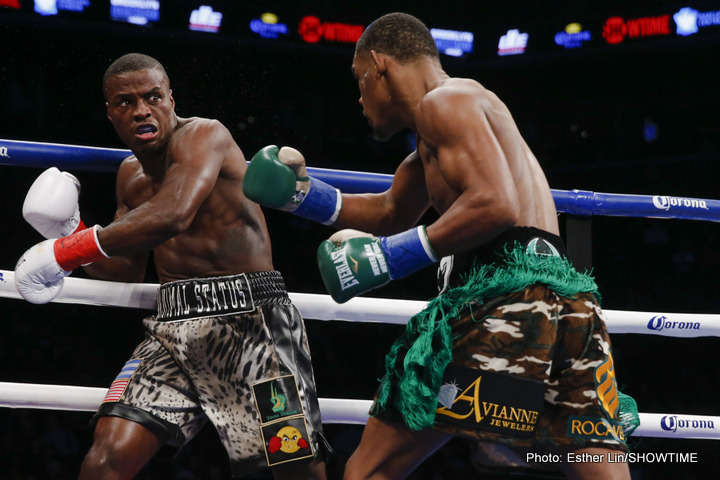 By Jim Dower: There’s talk of former WBO middleweight champion Peter Quillin being added to the Adrien Broner vs. Jessie Vargas card on April 21 at the Barclays Center in Brooklyn, New York. The 34-year-old Quillin would be facing J’Leon Love (23-1-1, 13 KOs) in super middleweight action.

Both guys are top 10 contenders at 168. However, if Quigg-Love does make it on the Broner vs. Vargas card on Showtime Boxing on April 21, it’s not likely that it would make it onto the televised portion of the card. The card already has unbeaten Jermall Charlo facing Hugo Centeno Jr. for the interim WBC middleweight title, and former super featherweight world champion Gervonta Davis battling former WBA featherweight champion Jesus Andres Cuellar for the vacant World Boxing Association super featherweight title.

Quillin and Love both need wins to keep moving in the direction of a title shot. Love, 30, recently fought to an 8th round technical draw against Abraham Han last September. The fight was stopped after Han suffered a cut from an accidental head-butt. Two of the judges had the fight knotted at 76-76 while the third had Love ahead 79-73.

Quillin’s career has tailed off after he vacated his World Boxing Organization 160 lb. title in September 2014 after he was ordered to fight mandatory challenger Matt Korobov. Quillin was knocked out in the 1st round by Daniel Jacobs in December 2015, and then he took nearly two years off from boxing before returning to the ring last September for a fight with journeyman Dashon Johnson.

Quillin won that fight by an 8 round decision. Quillin has been out of the ring for 3 out of the last 4 years. He’s not been staying busy for some reason, which would explain which his career stalling out.

At this point it might be too late for Quillin to recapture the form that he once had when he was in the prime of his career. He’s fighting at 168, and he’s getting up there in age. Quillin’s best chances of winning a world title at this point would be for him to go after WBA World super middleweight champion Tyron Zeuge or IBF champion Caleb Truax.

Quillin has the skills, speed and punching power to beat the 30-year-old Love. It’s a very winnable fight for the soon to be 35-year-old Quillin. The ring rust and age might be a problem for Quillin though. Love is younger, and he’s busier than Quillin, although he hasn’t fought in the last 6 months. Love still is the far more active fighter compared to Quillin, and that might be enough for him to win the fight if he can handle his punching power.


« Dillian Whyte vs. Lucas Browne on HBO on March 24