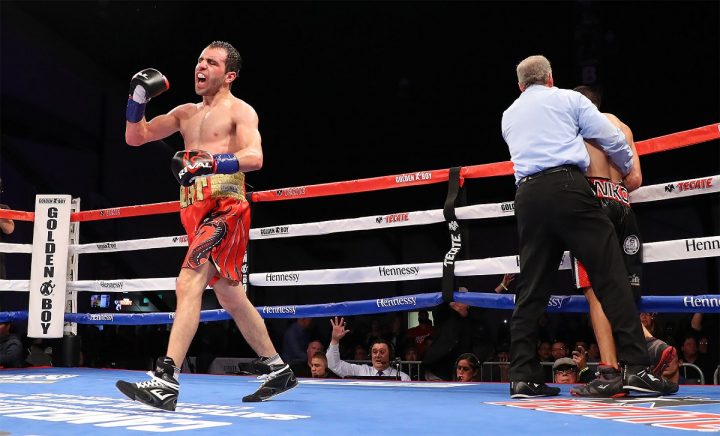 Explosive Armenian contender Azat “Crazy” Hovhannisyan (14-2, 11 KOs) defended his WBC Continental Americas Super Bantamweight Title in exciting fashion as he defeated hometown hero Ronny Rios (29-3, 13 KOs) via sixth-round technical knockout in the main event of the March 9 edition of Golden Boy Boxing on ESPN before a sold-out crowd at the OC Fair & Event Center in Costa Mesa, Calif. Rios started strong in the first round, but a fusillade of punches from Hovhannisyan hurt and nearly stopped him in the third round. Rios struggled to recover, but a knockdown followed by another flurry of punches from Hovhannisyan forced referee Jack Reiss to stop the fight at 1:12 of the sixth round. At the time of the stoppage, two judges had the fight even at 47-47, while one judge had the fight 47-48 for Hovhannisyan.

“I knew I was going to stop him early, but then my right hand started to hurt,” said Azat Hovhannisyan. “When my hand started hurting more, I went for the stoppage. Freddie [Roach] kept me calmed between rounds. I’m ready for a world title shot. I want any champion at 122 pounds.”

In the co-main event, welterweight prospect Alexis “Lex” Rocha (11-0, 8 KOs) once again exceeded expectations as he destroyed Miguel Dumas (10-2, 7 KOs) in the first round of a scheduled eight-round affair to capture the WBC Continental Americas Welterweight Title. Rocha, of Santa Ana, Calif., wasted no time in measuring his opponent, pushing the native of Tijuana, Mexico back with hard shots to the body. Rocha also mixed up the speed with which he threw his punches, tapping Dumas with slower shots before landing a quick and hard right uppercut that dropped Dumas immediately. Upon getting up, Dumas was greeted with a fight-finishing combination that ended matters then and there.

“I get more nervous watching my brother’s fights than my own,” said Alexis Rocha. “I came in composed and relaxed, just ready for anything to happen. I never plan for a knockout. I’m so happy that I get to take the belt home in front of all my Santa Ana fans.”

Maricela “La Diva” Cornejo (10-3, 2 KOs) scored a fourth-round technical knockout victory against Lisa Garland (15-10, 8 KOs) in tonight’s televised swing bout that was originally scheduled for six rounds in the super middleweight division. Cornejo overwhelmed Garland in each round to eventually force the referee to end the fight at 1:09 of the fourth round.

“Winning the day after Women’s International Day is a huge accomplishment for me,” said Maricela Cornejo. “I hope that my win inspires more women to go into the gym. For this fight, I knew I was going to knock her out within the first round but had to get around her smothering me. Once I was able to break through, I was able to work it.”

Marvin Cabrera (7-0, 5 KOs), the rising middleweight prospect who is trained by former world champion Daniel Ponce De Leon, opened the night of action with an eight-round unanimous decision victory against Mexican pugilist Sergio Gonzalez (6-5, 2 KOs). During the fight, the men traded knockdowns: Cabrera was dropped in the second round and Gonzalez was dropped in the fourth. Nevertheless, Cabrera prevailed with scores of 79-72, 78-72, and 78-72.

“My opponent came in a little overweight, so we had to adjust a bit,” said Marvin Cabrera. “I definitely could have been a little faster, using that as an advantage since he was on the slower side. Overall, I’m happy with the win.”

Irish welterweight prospect Aaron “Silencer” McKenna (1-0) was originally scheduled to take part in tonight’s event. But due to falsification of documents on the part of his opponent, Adolfo Caro (0-1), the California State Athletic Commission decided that the fight would not take place.

Rios vs. Hovhannisyan was a 10-round fight for the WBC Continental Americas Super Bantamweight Title presented by Golden Boy Promotions. The event was sponsored by Tecate, “THE OFFICIAL BEER OF BOXING” and Hennessy, “Never Stop, Never Settle.” The the event took place on Friday, March 9, 2018 at The Hangar at The OC Fair and Event Center in Costa Mesa, Calif. 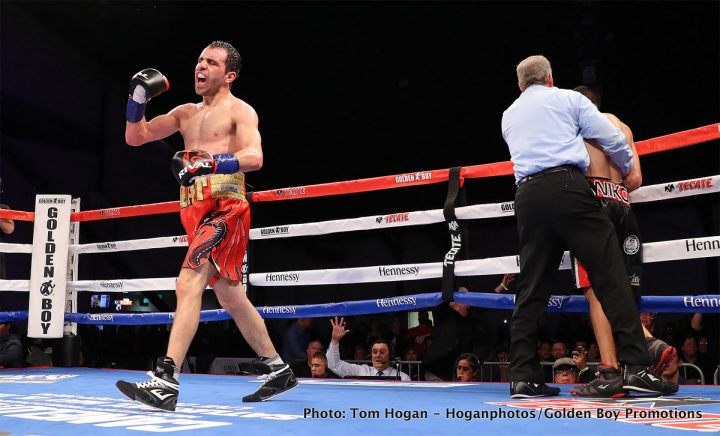