Adrien Broner calls out Keith Thurman: “you can get it next” [after Vargas] 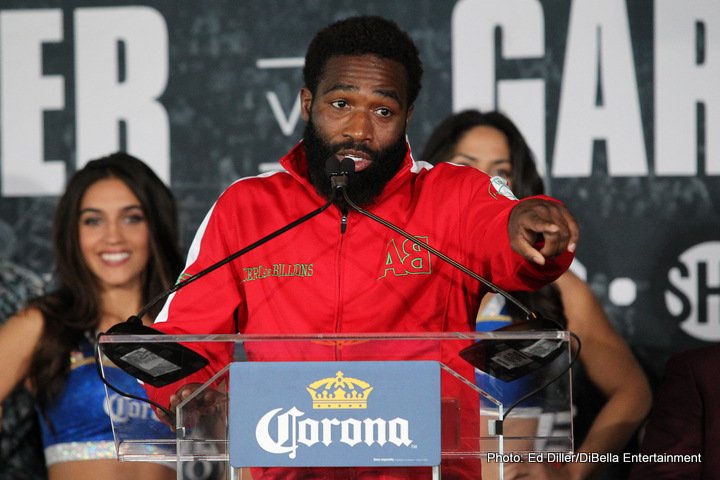 By Dan Ambrose: Adrien Broner (33-3, 24 KOs) fired back at WBA/WBC welterweight champion Keith Thurman in response to some negative comments he made about him recently. Thurman said Broner can be easily outworked due to his low work rate, and that he still sees him as a lightweight rather than a true 140 or 147 pound fighter.

Broner didn’t like having his ability disparaged by Thurman, so he said he can fight him next after his April 21st fight against Jessie Vargas (28-2, 10 KOs) at the Barclays Center in Brooklyn, New York. Broner-Vargas will be televised on Showtime Boxing.

Here’s what Broner said on his social media:

“Keith Thurman, I hear your talking s—t. That ain’t no fake beef like you and Shawn [Porter] got going on. You don’t want this smoke MF. I will get on yo [backside]. And you can get it next after I [expletive] Vargas up. [There] ain’t no more NICE guy #AnyBodyCanGetIt #CanMan.”

Broner might not get pass Jessie Vargas. This isn’t another one of Broner’s weak opponents that have been lined up for him to look good against. Vargas has a very good chance of beating Broner, who is looking like he left his prime behind in 2013. Vargas might send Broner into retirement on April 21.

Considering that this is a ‘get back year’ for the 29-year-old Thurman (28-0, 22 KOs), it’s quite possible that he might throw Broner a bone by giving him a title shot, but it might be impossible for him to squeeze the fight in. Thurman is fighting a tune-up on May 19th on Showtime. After that, he’s likely to face his WBC mandatory challenger Shawn Porter in a rematch. Thurman is going to be fighting just twice in 2018 instead of three times like he’d originally wanted to do this year. At the earliest, Thurman won’t be able to face Broner until 2019, and that’s a big if. Thurman might lose to Porter in their remach. He barely beat him in 2016, and that was before Thurman suffered an elbow injury. Further, Thurman is starting to put on a lot of weight between fights. He swells up from good eating and looks like an out of shape middleweight instead of a welterweight. You can only go to the well so many times when it comes to a fighter that is letting his weight go like Thurman.

“No, I wasn’t impressed with his win over Broner,” Thurman said to Fighthype about Mikey Garcia’s recent victory over Broner. “It was just a basic style of boxing. Broner has a bad habit of making fights look like sparring sessions, and he’s too young and he doesn’t have a high enough work rate. He’s one of the easiest fighters to outwork when it comes to numbers, and Mikey Garcia definitely outworked him and pretty much dominated the fight using his reach advantage. They say Broner fought at 147, but they forget that Broner was a 135 pounder too. They’re practically the same weight class. When I see lighter guys moving up and fighting in a new weight class, to me they’re still in the old weight class but are too lazy to lose the weight.