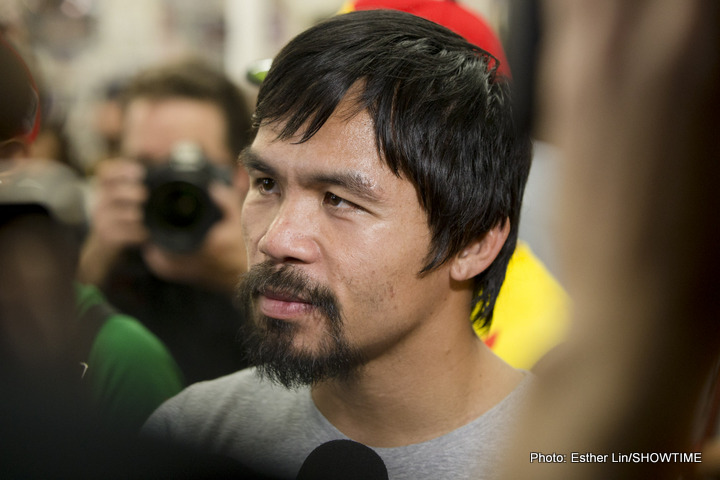 By Chris Williams: Former light welterweight champion Terence ‘Bud’ Crawford says won’t put himself in the same position 39-year-old former 8 division world champion Manny Pacquiao is being put on an undercard when he gets older. Crawford says he WON’T be still fighting when he gets older, but he says they might do him the same way by having him fight on an undercard if he got up there in age.

Top Rank hasn’t come out to confirm that Pacquiao will be the undercard fight on the April 14h card, but there is a lot of talk that’s where he’ll end up. This is a pay-per-view card on ESPN with WBO welterweight champion Jeff Horn and Terence Crawford fighting it out. Those are not pay-per-view fighters though. Crawford’s only other attempt at headlining a PPV card on HBO was a disaster against Viktor Postol in July 2016. The fight was said to have brought in 50,000 PPV buys on HBO, and that was with 2012 Olympian Oscar Valdez and Oleksandr Gvozdyk on the undercard.

For the April 14th ESPN PPV card to bring in any kind buys, Pacquiao has to be in the main event, because Crawford vs. Horn is PPV material. This is where the problem is. If Pacquiao is matched against Mike Alvarado, few boxing fans are going to want to pay to see that horrendous fight. I’m not sure who’s brain child Pacquiao-Alvarado was, but it’s a horrible idea. If this was 2012, then maybe some fans would be interested in seeing Pacquiao fight Alvarado, but definitely not the fans from this era.

Having Pacquiao fighting an undercard is viewed as disrespectful to him by a lot of fans. It was only 4 fights ago that Pacquiao was involved in the biggest pay-per-view fight ever against Floyd Mayweather Jr. Pacquiao has only lost one fight since then, and that was when Top Rank made the decision to have him fight in little known fighter Jeff Horn’s own hometown of Brisbane, Australia last July. The result was Pacquiao was roughed up for 12 rounds, and beaten by a controversial decision. The way that Horn got away with roughing Pacquiao up without being penalized was bad enough, but then the scoring of the fight made it all the worst. As big a star as Pacquiao is, he should have never been put in the position where he was fighting in Horn’s hometown, because it’s not as if this guy was a big star. He was a guy with an inflated ranking of wins over weak opposition going into the fight with Pacquiao. Someone from Pacquiao’s Team should have rejected the fight with Horn, and looked in another direction towards a fight with Amir Khan.

“That’s kind of hard to say being that we’ve been chasing that fight for years now, and it still hasn’t happened,” Crawford said to Fighthype about whether a fight between him and 39-year-old Pacquiao will ever happen. ”It’s boxing. Who’s to say when I get older and up there and I still was to box, which I wouldn’t, they wouldn’t do me the same. He earned his right to be able to take those lesser guys,” Crawford said.

Pacquiao is being mentioned by his trainer Freddie Roach fighting super featherweight Vasyl Lomachenko in November at 140. Whether that fight happens is unclear. If so, then Crawford won’t be getting the fight against Pacquiao, which is just as good because it’s a bad fight for both. Pacquiao will probably lose, and Crawford won’t gain anything from the win due to the advanced age of the Filipino star. So instead of Pacquiao being used as a stepping stone to make Crawford a bigger star, he’s being put in that position to make Lomachenko into a bigger star. A move like that would only transform Lomachenko into a temporary star. Without continued wins over other fighters from the welterweight division, Lomachenko’s popularity will go back down to where it is now. Since it’s highly unlikely Lomachenko will ever agree to fight welterweights like Crawford, Errol Spence Jr. and Keith Thurman, he’s going to be stuck at lightweight and light welterweight fighting select guys that Top Rank throws in there with him. We’re talking guys like Ray Beltran and Jorge Linares. Lomachenko won’t become a star beating them.

Pacquiao (59-7-2, 38 KOs) is expected to be fighting former WBO World light welterweight champion Mike Alvarado (38-4, 26 KOs) on the undercard of Crawford vs. WBO welterweight champion Jeff Horn (18-0-1, 12 KOs) on April 14th on ESPN pay-per-view at Madison Square Garden in New York. For some reason, Top Rank, the promoter for Pacquiao, has decided to match him up against past his best 37-year-old Alvarado. It’s a fight that is already being criticized by boxing fans, which see it a poor fight for Pacquiao. Being put on an undercard is a big step down for Pacquiao.

Top Rank promoter Bob Arum probably would have made the Pacquiao-Crawford a long time ago if Manny had given the fight a green light. Arum has certainly mentioned wanting to make that fight in the past, but Pacquiao has gone in different directions towards dull fights against Tim Bradley [x 3], Jessie Vargas and Jeff Horn. If the shoe was on the other foot and Crawford was 38 or 39 and he had a promoter that was interested in matching him against a young fighter in his prime, I don’t think he would appreciate being put in that situation. Crawford says it himself that he won’t be still fighting when he gets older, but if he was still competing, he wouldn’t be surprised if he were put in the same position. 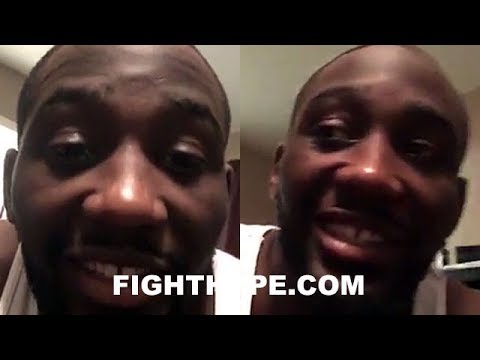