Pacquiao’s April 14th fight expected to be finalized this week 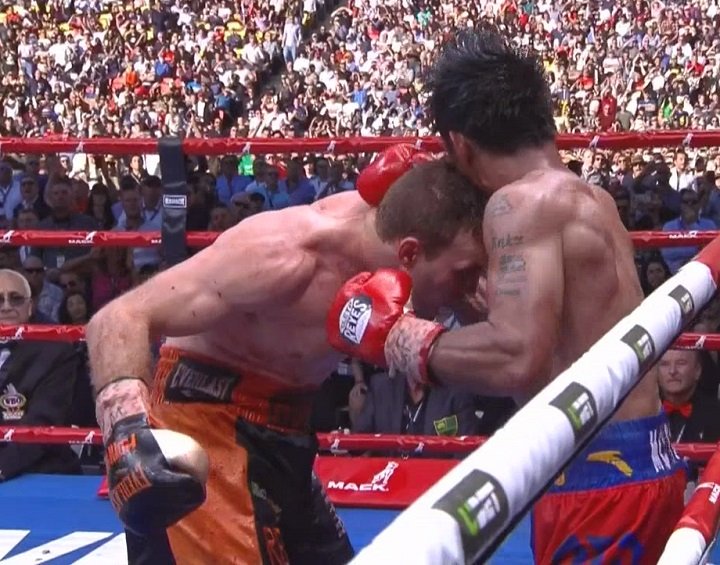 By Stanley White: Manny Pacquiao’s next fight on April 14th is said to be close to being finalized this week by his promoter Bob Arum. According to the LA Times, the leading candidate to face the 39-year-old Pacquiao is the ring warn and badly faded Mike Alvarado, a fighter that is the downside of his career at 37. However, Alvarado is promoted by the same promoter as Pacquiao (59-7-2, 38 KOs) in Bob Arum of Top Rank, so it makes him a good choice for an in house fight. Pacquiao fighting Alvarado is a terrible match if the idea is to put on an exciting fight for the fans. It would have been a good fight 6 years ago before Alvarado started losing repeatedly, but it’s horrible fight now. Pacquiao doesn’t need tune-ups against journeyman fighters like Alvarado.

What’s unclear is why Arum hasn’t made an attempt to match Pacquiao against WBA World welterweight champion Lucas Matthysse. It would be a good fight for Pacquiao, and it would give him the chance at winning a world title. However, Matthysse isn’t one of Arum’s fighters in his Top Rank stable, and he likes to make matches with his own guys.

The likely rationale for Arum in matching Pacquiao against Alvarado is it gives him a chance to look good and maybe get a rare knockout. Pacquiao hasn’t knocked out an opponent in 9 years since his 12th round stoppage win over Miguel Cotto in 2009. By putting Pacquiao in with Alvarado, it gives him an excellent chance of scoring a knockout. With a lot of casual boxing fans watching the Pacquiao-Alvarado fight, they’ll be impressed with what they see from him and possibly more willing to pay to see him fight the winner of the Terence Crawford vs. Jeff Horn fight.

That’s one of possible reasons why Arum is making a fight between Pacquiao and Alvarado. The overall likely reason is Alvarado is one of Top Rank fighters, and he won’t have to use a fighter outside of his Top Rank stable for Pacquiao to fight. Arum would have total control over the promotion if he can make the Pacquiao-Alvarado fight. The problem is that Alvarado is irrelevant in today’s welterweight division. Alvarado is yesterday’s news.

Having Pacquiao fight Alvarado on ESPN PPV is just an incredibly bad idea if the goal is to get boxing fans to purchase the fight. The hardcore fans are not going to be interested in paying to see Pacquiao beat up Alvarado, and the main event between Terence Crawford and Jeff Horn is also a mismatch between a fighter perceived as a paper champion and a counter-puncher known for being defensive. Crawford is not an exciting Gennady ‘GGG’ Golovkin type of fighter. Crawford is a counter puncher, who likes to move around the ring while taunting his frequently over-matched opponents.

Pacquiao lost his last fight to Jeff Horn on July 2 in a fight that took place in Brisbane, Australia.
Pacquiao’s April 14th fight will be on the same card as WBO welterweight champion Jeff Horn’s title defense against mandatory challenger Terence Crawford. Arum plans on making the April 14th fight a pay-per-view event on ESPN. Whether Horn vs. Crawford and Pacquiao vs. Alvarado will interest enough boxing fans to purchase the card is unknown at this point.

It’s a very, very hard sell to asking the boxing public to pay to see a faded 39-year-old Pacquiao fight an arguably over-the-hill Mike Alvarado (38-4, 26 KOs) and Crawford (32-0, 23 KOs) battle Australian Horn (18-0-1, 12 KOs) on ESPN PPV. Alvarado has a 4-fight winning streak going for him since losing 3 fights in a row, but his wins have come against no-name fighters. Alvarado can’t be counted on to beat the top level opposition at this point in his career.

Those 2 are both fighters in Arum’s Top Rank stable as well, and it’s believed that the 86-year-old promoter wants to have Pacquiao face the winner of that fight. Crawford will probably emerge as the winner against Horn. That will setup a match-up between Pacquiao and Crawford for later this year on ESPN PPV.

“We’re going over contracts with four guys that we handle, and everything’s coming along nicely,” Arum said to Lance Pugmire at the latimes.com.

If Pacquiao ends up on the undercard of Horn-Crawford, it will have a bad look to it. Pacquiao is easily the most popular fighter on the card. Crawford is someone that some hardcore boxing fans like, but he’s failed to establish a big enough fan base for him to be a PPV guy. Arum is trying to turn Crawford into a PPV attraction by looking to match him against the nearly 40-year-old Pacquiao, but that probably won’t nearly enough to make him a star. Arum tried to turn Tim Bradley into a PPV attraction on his own, and it didn’t work.

Bradley fought Pacquiao 3 times, and he was only able to bring in a lot of PPV buys when he was fighting him in the first 2 fights. Without Pacquiao, Bradley wasn’t a PPV worthy fighter. Crawford’s situation is not as good as Bradley’s in terms of him facing Pacquiao when he’s end of his career and having been beaten by Jeff Horn and Floyd Mayweather Jr.

If Pacquiao ends up on the undercard of the Horn-Crawford fight instead of the main event, you can argue that he probably should have retired from boxing rather than re-signing with Top Rank. The way Pacquiao has been matched lately has been disappointing to see. In Pacquiao’s last 3 fights, he’s fought Tim Bradley, Jessie Vargas and Jeff Horn. The match-making for Pacquiao has totally uninspiring to say the least. There was no demand for Pacquiao to fight Bradley a third time, but Arum went ahead anyway and made that fight for HBO PPV in April 2016.

The PPV totals were not even close to what Pacquiao had made in his previous 2 fights against Bradley. Arum might have assumed that because the boxing public was interested in seeing the first 2 Pacquiao-Bradley fights that he could make a third and the fans would be more than happy to pay to see that one too. They weren’t interested. Likewise, the fans weren’t interested in Pacquiao’s fights against Jessie Vargas and Jeff Horn. Arum made the decision to have Pacquiao fight Horn in his native Australia instead of the U.S. That turned out to be a bad deal for Pacquiao, as he lost a controversial decision to Horn in his hometown. Crawford doesn’t have to fight Horn Australia, which is a good thing for him. It’s too bad Pacquiao didn’t get the same deal, because he avoided a loss.


« Anthony Joshua vs. Joseph Parker on March 31 on Showtime