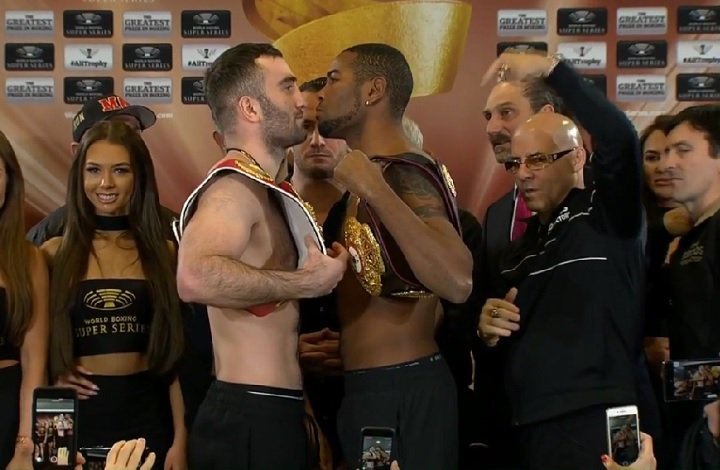 By Allan Fox: IBF World cruiserweight champion Murat ‘Iron’ Gassiev (25-0, 18 KOs) and WBA champion Yunier ‘The KO Doctor’ Dorticos (22-0, 21 KOs) both made weight on Friday for their semifinals match on Saturday night at the Bolshoy Ice Dome in Adler, Russia.

Gassiev, 24, weighed in at 199 pounds in coming in 1 pound under the maximum limit for the weight class. The 31-year-old Dorticos weighed in right at the upper limit of the cruiserweight division at 200 lbs.

Both fighters looked in great shape. Dorticos looked a little soft in the midsection, but that’s normal for him. Unlike a lot of fighters, Dorticos isn’t cut up with his physique. He always looks like he’s carrying around an extra 10 pounds of fat on his physique. Dorticos would probably be better off fighting at light heavyweight than cruiserweight, because he’s not as solid as most top cruiserweights. If things don’t work out for Dorticos on Saturday, he might want to think about losing some weight and moving down to light heavyweight and giving that a go. If Gassiev has Dorticos’ number on Saturday, there won’t be anywhere for the Cuban to go in the division unless Gassiev and Oleksandr Usyk move up in weight.

“I don’t feel any pressure at all. I am looking forward to fighting,” Gassiev said. “The stare down was intense, but that is normal. I see a future in the tournament after this fight. I will do my job.”

Gassiev’s best chance of winning this fight with Dorticos is to turn it into a war and go after his midsection with hard power shots. Dorticos looks soft around the middle, and that might be the way to weaken him and eventually score the stoppage. Dorticos isn’t considered a fighter with a steal chin. When he’s lost in the amateur ranks, he’s been blown out quickly by big punchers like Artur Beterbiev.

Since turning pro, Dorticos hasn’t faced any big punchers in the class of Gassiev or even Beterbiev, so it’s not surprising he hasn’t been knocked out yet. Dorticos’ will definitely be tested on Saturday night by Gassiev, and if it hasn’t improved since his amateur days in Cuba, we could see an early stoppage by the Russian.

“On Saturday the Russian fans and boxing fanatics all over the world will learn what the ‘KO Doctor’ is about!” Dorticos said after the weigh-in. ”I will end the fight before the fifth round. I will kick his [expletive] in front of his own fans.”

Dorticos talks a big game, but the reality is he hasn’t faced anyone good yet at cruiserweight. His best wins came against flawed fighters in Dmitry Kudrashov and Youri Kalenga. Those are not super talents for the cruiserweight division. They’re more fringe level at best. Gassiev has the far better wins on his resume over Denis Lebedev and Krzysztof Wlodarczyk. I would favor Lebedev to beat Dorticos. That’s IF Lebedev and Dorticos were to fight right now. Lebedev has the chin, and I think he would take Dorticos’ best shots in the early rounds to eventually knock him out. Dorticos is a good fighter, but he’s clearly the weak link among the 3 remaining fighters in the World Boxing Super Series. If Dorticos makes it past the 6th, it’ll only because he’s running and not because he’s taking major head shots and dealing with Gassiev’s power in good form, because I don’t think he can handle his power. If Dorticos gets hit too much in this fight, it’s going to be over with very quickly.

Gassiev needs to be more methodical in this fight than he was in his win over Lebedev in December 2016. Gassiev made that fight a lot harder than it should have been by fighting at too slow of a pace and allowing Lebedev to get his shots off. Lebedev came out with an entirely different fighting style by using nonstop movement to keep from getting nailed by Gassiev’s big shots. When Lebedev would stop to fight, he’d throw a few punches and either grab Gassiev in a clinch or start moving again. Lebedev changed his game for the fight, and it didn’t work. Lebedev ended up getting tired and rubber-legged by the second half of the fight. When Gassiev would hit Lebedev, he would wearily get knocked backwards. His tired legs couldn’t keep him steady. That made it easy for 2 of the judges to give the win to Gassiev. One judge had Lebedev winning 114-113. Lebedev didn’t look like he deserved the win, but that judge saw something in his game that made him feel that he deserved the win. Dorticos might try and use the Lebedev blueprint in hopes of winning a decision. I think that’s Dorticos’s chance of getting a win. Lebedev came close to defeating Gassiev by a decision. He never hurt him. If Dorticos tried to KO Gassiev, then it means he’ll be standing in front of him and going to war on Saturday night. That’s Gassiev’s style of fighting, and I don’t think it’s going to work out well at all for him. Dorticos is treating the Gassiev fight like he’s facing Kudrayashov or one of the contenders that he built his 22-0 resume on. I think that’s a big mistake on his part.

The winner of the Gassiev-Dorticos fight will be meeting WBC/WBO cruiserweight champion Oleksandr Usyk in the finals of the World Boxing Super Series tournament on May 11th in Jeddah, Saudi Arabia. Usyk already earned his spot in the finals of the WBSS tournament with his recent 12 round majority decision win over Mairis Briedis in the semifinals on January 27th in Riga, Latvia.

In other weights on the card, former WBA super middleweight champion Fedor Chudinov (16-2, 11 KOs) weighed in at 167 ¼ lbs. for his 12 round fight against journeyman Timo Laine (21-9, 6 KOs). For his part, Laine weighed in at 168 lbs. Chudinov, 30, will be defending his WBA International 168 lb. title. Chudinov has won his last 2 fights since losing his WBA super middleweight title to George Groves by a 6th round knockout last year on May 27 at Bramall Lane in Sheffield, England. Since then, Chudinov has beaten Jonathan Geronimo Barbadillo and Ryan Ford. 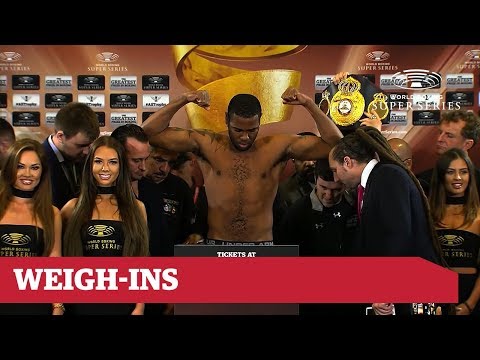