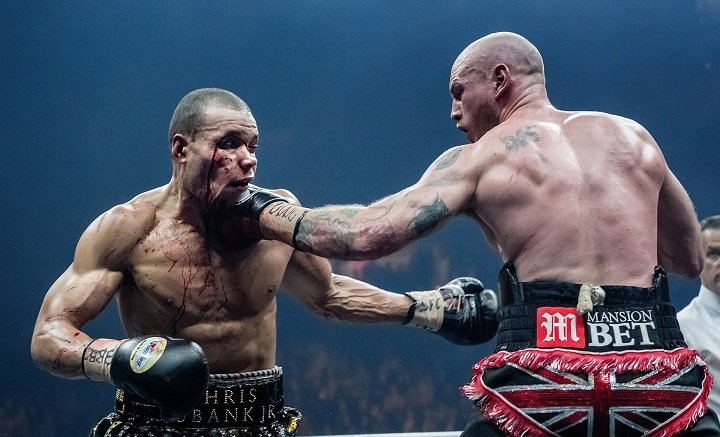 By Scott Gilfoid: As I predicted, George Groves (28-3, 20 Kos) was way too talented for the much smaller Chris Eubank Jr. (26-2, 20 KOs) in beating him by a 12 round unanimous decision in the semifinals of the World Boxing Super Series (WBSS) on Saturday night in front of a packed Manchester Arena in Manchester, England. The judges had Groves winning 117-112, 116-112 and 115-113. Those scores don’t appear to match tonight’s fight between Groves and Eubank Jr. There are not 4 or 5 rounds in the fight that you can point to and say Eubank Jr. won them. At best, Eubank Jr. won 2 rounds. At worst, he won only round 12 after Groves suffered a shoulder injury.

Those scores were VERY generous to Eubank Jr., who won only 2 rounds on the Boxing News 24 scorecards. Groves appeared to win by a 10 rounds to 2 score. There only a couple of rounds in the fight in which you could say that Eubank Jr. did enough to win. Groves seemed to suffered a shoulder injury to his left shoulder in round 12. If not for that, he would have likely won that round as well, as Eubank Jr. was fighting like he’d lost his senses completely with the way he was wildly bum rushing Groves and walking into tremendous shots. Eubank Jr. fought like an amateur, especially in the later rounds when he was swinging for the fences in a desperate attempt to score a knockout.

The referee Michael Alexander completely missed a knockdown in round 2 in which Groves nailed Eubank Jr. with a big right hand that caused him to reach down with his right glove and touch the canvas to keep from falling. That was sad mistake by the referee because it was blatant. Without Eubank Jr. reaching down to touch the canvas, he would have fallen. Either way, it was a knockdown, but the referee was asleep at the wheel and missed making the call despite it taking place right in front of him.

The shoulder injury for Groves bring some doubt as to whether he’ll be able to fight in the World Boxing Super Series finals against the Juergen Braehmer vs. Callum Smith winner. If Groves suffered a dislocated left shoulder, he’s not going to have much time for the injury to heal before he needs to fight the winner of the Braehmer-Smith fight.

Eubank Jr. was missing with his shots throughout the fight. He was throwing a lot of wild left hooks from the outside and coming up short. Towards the end of the fight, Eubank Jr. did begin to connect with his left hooks with greater frequency, but Groves always countered him with big right hands. Moreover, the power behind Eubank Jr’s left hooks weren’t enough to even knock Groves off balance. There wasn’t enough weight behind the blows for Groves to be bothered by them. It was in these instances where Eubank’s lack of power was a real limiting factor for him. If he had possessed Carl Froch type power, he would have been able to turn the fight around with those big shots. Unfortunately, Eubank Jr’s shots couldn’t dent Groves’ chin in the fight, and he ended up getting a boxing lesson by the bigger and more technical Saint George.

An accidental clash of heads caused Eubank Jr. to receive a cut on the side of his right eye in round 3. It was big cut and there was no way his corner could close it, especially with the way Groves kept nailing him with shots in the subsequent rounds.

In round 8, Groves casually shoved the smaller Eubank Jr. through the ropes like a rag doll. When the referee helped entangle Eubank Jr. from the ropes, he landed a cheap shot to the head of Groves. The referee should have taken a point away from that move because it was a clear foul of frustration on Eubank’s part. Groves was so much stronger and more talented than Eubank Jr.

Groves reportedly rehydrated to 184 pounds overnight, and he stepped into the ring as a light heavyweight for all intents and purposes. It’s unclear how much Eubank Jr. weighed, but he looked at least 10 lbs. lighter than Groves if not more. Ultimately, the size difference between the two fighters was too much for Eubank Jr. to deal with. He was a middleweight fighting a light heavyweight, and he was never going to win that fight, especially with his limited boxing skills and his shortage of courage that he brought to the ring with him tonight. There are some skilled middleweights with punching like Gennady ‘GGG’ Golovkin, Saul Canelo Alvarez, Jermall Charlo, Sergiy Derevyanchenko and Daniel Jacobs, but Eubank Jr. is not in the same class of those talents. In hindsight, it’s a good thing that Eubank Jr. chose not to fight Golovkin in 2016, but he would have been dominated and likely stopped by him.

Eubank Jr. was entirely unwilling to attack Groves the way he had talked about doing before the fight. For weeks, Eubank Jr. had bragged out how he was going to “devastate” Groves and send him into “retirement.” But when the fight started, Eubank Jr. wanted no part of going after Groves. The issue was that Groves kept hitting the much smaller Eubank Jr. with hard jabs and this put him off his game.

“He didn’t bring pressure because I was hurting him,” Groves said to Sky Sports News. ”I dropped him at least once, but it didn’t count, which was dubious.”

Yes, there was a clear knockdown in round 2 that the referee either didn’t see or felt that it wasn’t a legitimate knockdown. In looking at the replay of the knockdown, Groves hit Eubank Jr. with a big right hand to the head that caused him to bend forward like a pretzel and touch the canvas with his glove to keep from falling down. The referee blew an important call. Thankfully it didn’t impact the fight. You hate to see poor officiating in a major fight like this in the World Boxing Super Series. The judging was bad enough with the close scores turned in in by the 3 judges.

Eubank Jr. needs to weigh his options and consider moving back down to 160, as he’s just too small to be fighting at 160. Groves beat Eubank Jr. more on size tonight than anything. Eubank Jr. looked like a small middleweight inside the ring against a big super middleweight. Eubank Jr. will have similar problems if he faces the likes of Callum Smith, Juergen Braehmer, Tyron Zeuge and Gilberto ‘Zurgo’ Ramirez. I would pick all of those fighters to beat Eubank Jr. with ease. He’s just too small. If Eubank Jr. wants to be stubborn, he can stay at 168, but I think it would be stupid for him to do so. His career will implode if he stays at super middleweight and starts getting beaten up on a regular basis.